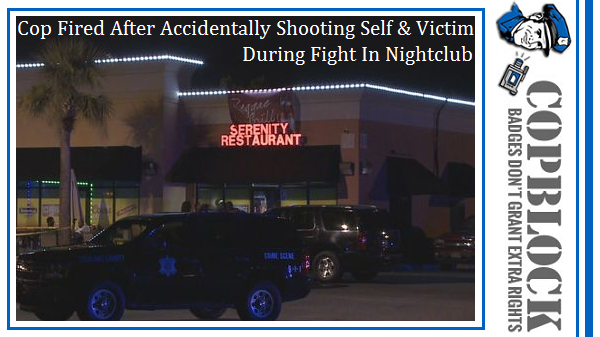 Just before midnight on Monday Officer Tracey Hudson of the Columbia, South Carolina Police Department was not feeling the vibe suggested by the name at the Serenity Restaurant and Lounge. Far from serenity, the enraged off-duty officer got into a brouhaha with another patron which led to some good old violence and stupidity.

Hudson left the restaurant to retrieve a gun which he used to pistol whip the man that he also struck with his fists. After this a struggle ensued during which the gun went off, causing non-life-threatening injuries to both parties.

Columbia Police Chief Skip Holbrook has fired the officer for violating a number of department policies which include ‘neglect of duty’ and ‘improper conduct’.

The Richland County Sheriff’s Office has charged Hudson with assault and battery of a high and aggravated nature, as well as pointing and presenting.

The profession of policing is a very inviting line of work for aggressively violent psychopaths. Both on and off the job, LEO’s are often locked in a struggle to contain their violent tendencies, and many often fail. That policing draws in so many of these types should be a good indicator of what lies at the heart and soul of that institution. The systematic use of force, which is the entire basis of police power, is such a morally bankrupt paradigm that it tends to fill itself up with individuals similarly lacking the peaceful values that most people hold dear. It is not just that there a some bad cops out there, it is that the institution of policing by the state itself is so intrinsically rotten that it is a natural fit for societies most dangerous predators. That which persists only through violence cannot ever be what is best for a society that wished to remain peaceful and harmonious.