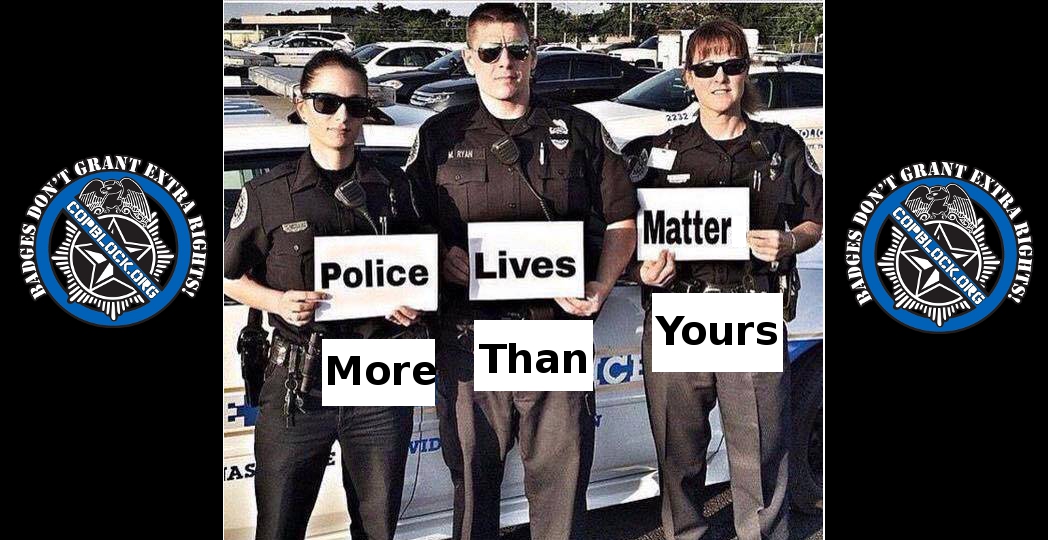 This post was submitted by George MacGregor, the founder of Yuba-Sutter CopBlock, via the CobBlock.org submissions page.

Along with his submission, George states:

I recently founded Yuba-Sutter CopBlock. I have only just started CopBlocking, and have recorded police on a couple of occasions. (I’m planning on doing much more in the future.) This is just an opinion piece that I felt compelled to write after someone posted this picture on my personal Facebook wall.

What a ridiculous statement. Police Lives Matter. Of course they do. How do we know? We are constantly told and shown that cop’s lives matter more than any other life. We see it in the news whenever a cop is killed.

Don’t take my word for it. Let’s just take a few examples from recent history:

When a cop gets killed, no amount of manpower or resources are too much. No effort or money is spared. They will continue unrelenting for weeks or even months, until the cop killer is caught or killed. Other crimes, or need for help, that comes from mere mortal citizens during this time, are often ignored or delayed for the more important task of catching the person that dared harm someone from their gang.

They suspend all of our Fourth Amendment rights by putting up road blocks, shutting down streets, or even whole neighborhoods in their relentless search. Nobody else’s rights are allowed during this time. People are ORDERED to stay in their homes, or not allowed to return to their homes. Backyards, outbuildings, and EVEN PEOPLES HOUSES are searched without a warrant and without probable cause.

Got a job to go to? Have a life to live? Children to pick up and drop off? Too bad, the hunt for a cop killer is far more important than any of these things. These extreme measures are not used even for serial killers, only cop killers. When have we ever seen roadblocks and massive manhunts for a shooting in the “hood”? Police believe that all “good” citizens, should freely and willingly give up these petty little constitutional rights for the more important task of catching “bad guys”. Now contrast that to a cop shooting an innocent, unarmed person. The police instantly vilify the victim by releasing any and all history with law enforcement. Every petty offense for marijuana or any domestic dispute ever reported is now laid out for everyone to see. The message is clear. The person was obviously a bad person, so it’s OK that they were killed. No award or community achievements are mentioned. No mention that they had a family, or kids, that were left behind.

When a cop gets shot, things happen fast. Police release 911 calls, video of the crime and the person (if available), as well as their name and any other negative information that they can find. They are arrested immediately and put in jail, not to be released even on bail until they can be tried for their crimes.

When a cop shoots someone, the cops name remains secret, the video remains secret, and it will take up to three years for the police department to investigate themselves. Cops are very rarely held accountable for these killings, and if they are held accountable, the punishment is usually very light, if at all. (a verbal reprimand for killing someone is not much punishment.)

So, yes, we all know that cops lives matter. We are reminded this by the cops themselves on a regular basis. The question then becomes, do black lives matter to cops? Their words say “YES”, but their actions say “NO”. Not that cops don’t think black lives matter, or citizens lives matter, just not as much as a cop’s life. Cops’ actions tell us that it is better that 20 innocent people get killed due to imaginary threats, than one cop killed by a real threat. It doesn’t matter who else gets killed, as long as the cops get to go home at the end of their shift. Police even say publicly that their safety is the number one priority above all else. That’s their safety, not the public’s safety.

A true hero is one who accepts the risk of injury or death to protect an innocent life. A cop on the other hand, holds their own safety above the life of any others. ( i.e., it is better that 20 “suspects” get killed for “reaching for something in their waistband” when there is nothing there, than one cop get killed because he waited to see if there was actually a real threat.) And lets get real about this. If a black man is running from cops, and he is reaching for his waistband, odds are, he isn’t reaching for a gun, HE IS JUST TRYING TO KEEP HIS PANTS UP! It is very difficult to run with your pants around your knees.

When police begin to demonstrate that our lives, and our safety are JUST AS IMPORTANT as cops’ lives or safety, then maybe we will believe the rhetoric that is being spewed from the mouths of the Police Unions.