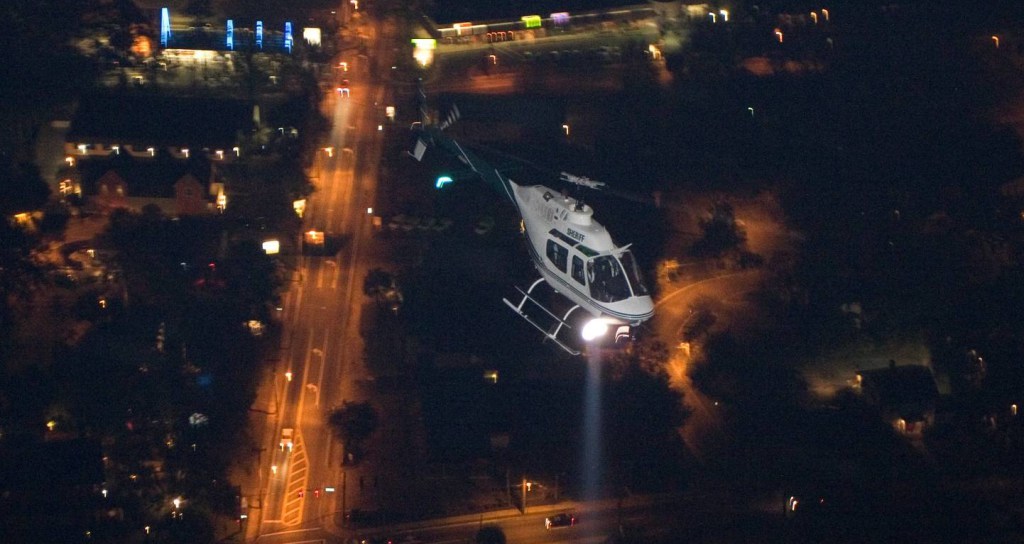 A police officer was shot and killed yesterday in Fox Lake, Illinois. Since the incident occurred, police have been on a large scale manhunt in search of three possible suspects.

According to the the police scanner broadcasting Lake County Sheriff, police have sent dozens of officers into neighborhoods and surrounding fields. One of the original complaints came from a suspicious person’s phone call saying that, “a white male, wearing a white t-shirt was causing commotion and proceeded to run northbound into a field”. An officer in the area reported that they had a possible target in the field, “hovering in the weeds” but it was disregarded as being a deer.

An officer on the radio stated that a suspicious person was standing alone about 100 yards from where he was standing. His inquiry was responded with, “disregard, that’s one of our guys”.

In the span of an hour, dozens of complaints came through the scanner. It was reported that a man left a nearby residence and was running at a high speed. There was a possible break in to a vehicle, a loud bang that had been classified as possible shots fired, a man wearing a t-shirt entered a vacant yard and a male wearing all black was walking down the street. A “hot spot” was investigated that was ultimately an electrical box. A scent that was being followed was dismissed as being an animal. A man in a car was investigated because passerby’s claimed that the man looked “too still” as they drove by. A canine was sent to a call from a resident regarding a man that had urinated outside; officers were investigating to collect a possible scent from the urine.

Multiple canine officers have been dispatched to several locations and helicopters are currently seeking heat signatures in the field.
There is no indication at this time that any of the incoming complaints are related to the events that occurred yesterday.

Why is such colossal effort put into finding a suspect that killed a police officer, yet dozens of people are killed in Chicago every weekend and their lives are dismissed? Why does it seem that anyone currently standing outside in Lake County is a possible suspect? Why do citizens feel the need to call the police arbitrarily because of the large police presence in the area?

If you are currently in Lake County Illinois, or in nearby surrounding areas, you are in danger. Not because of the suspected cop killers that are still at large, but in danger of being targeted by police as a “cop killer” without due process for simply being outside.

More to come as this story unfolds.