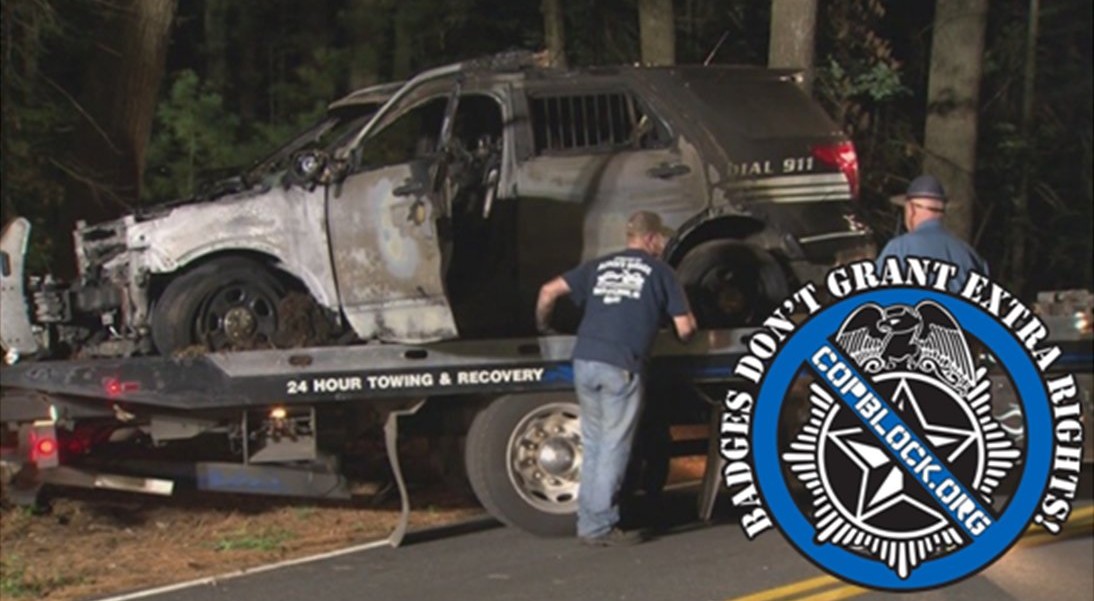 A Millis, Massachusetts police officer has been proved a liar after investigators say he “fabricated” a story about his cruiser being fired upon and catching on fire to hide the fact that he wrecked.

Wednesday, news broke that a man driving a maroon pickup truck fired at a still unidentified officer on Forest Road who claimed he returned two or three shots before his cruiser caught on fire.

“My cruiser’s been shot at. I’m at Forest Road. It’s going to be a dark maroon pickup,” the officer radioed to dispatch before later maintaining that in an attempt to avoid the gunfire, he slammed into a tree and the cruiser ignited.

Police responded by ordering residents to stay in their homes, and local schools were placed on lock-down while a search was launched for the “suspect” that included a SWAT team, K-9 officers, and a Massachusetts State Police helicopter – but no suspect was found.

Now, after a preliminary investigation, police say they have concluded that the officer made up the shooting story and fired shots at the cruiser himself to make it appear that he had been shot at.

“We have determined that the officer’s story was fabricated. Specifically, that he fired shots at his own cruiser as a plan to concoct a story that he was fired upon,” Millis Police Sgt. William Dwyer said Thursday. “The evidence indicates the shots were not fired by a suspect, and there is no gunman at large in or around the town.”

Police have not commented on the motives of the officer – who they say will now be terminated – but one reason the officer may have concocted the story was because, as a part-time employee that had not received full training yet, he feared his recklessness would have destroyed his chances of becoming a full-time officer.

The Norfolk County District Attorney’s Office is reportedly deciding whether or not to file charges against the officer and say his name will be released after a full investigation into the incident is complete.

Obviously this is an absurdity and would never be a consideration if the deceit had been perpetrated by a private citizen but Sgt. Dwyer said he is “very upset” with the situation “and don’t know how to feel right now.”