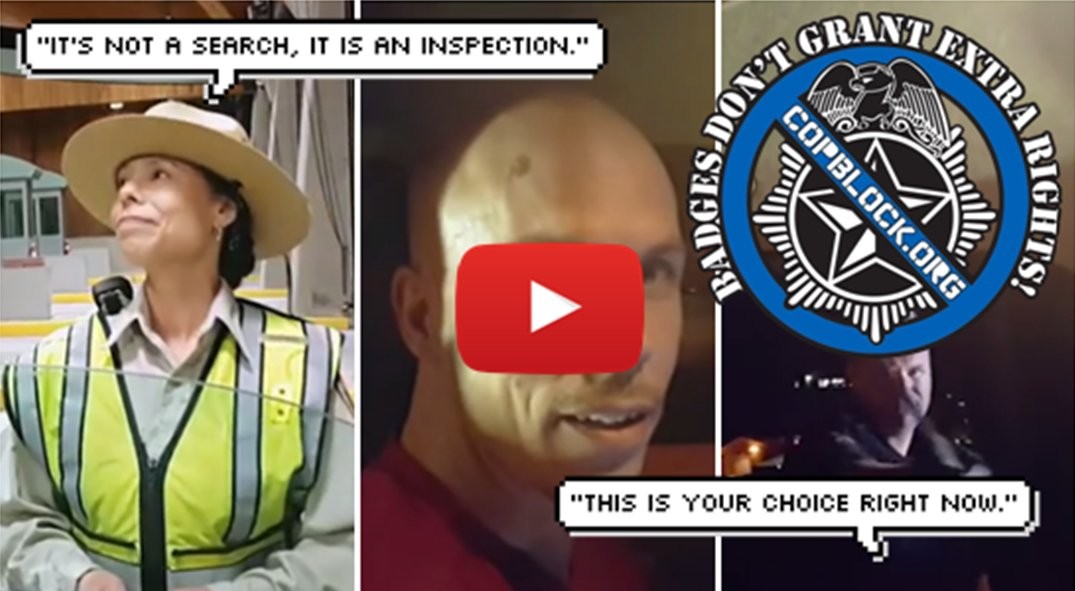 In an enraging display of government double-speak, disregard for the Constitution, and deflection of personal responsibility by police and other state enforcers, a California family was arrested and their child was kidnapped for standing up for their right to be secure in their persons and property last month.

Video posted to social media Wednesday details the experience of the Feinman Family as they were accosted at a draconian “agricultural inspection” checkpoint on Highway 395N in Long Valley between California and Nevada.

The California Department of Food and Agriculture operates 16 such agriculture inspection stations that are located along the major highways that enter the state for the stated purpose of “helping the Governor and Legislature ensure delivery of safe food and fiber through responsible environmental stewardship in a fair marketplace for all Californians.”

The footage begins with the family making its way through the checkpoint to sounds of a state agricultural officer asking, “where ya coming from?” before Mr. Feinman asserts that his family “don’t answer questions” and will be on their way.

“You’re gonna go?” the Ag officer asks. “This is just an agricultural inspection, I’m wondering where you are traveling from?”

Mr. Feinman rightly tells the man that its “none of his business” where his family was traveling from and the officer radios his partner or superior for help, and says he needs to know if the family has “any agricultural articles on board.”

“If you keep driving, I will contact the authorities and have them bring you back to the facility,” the woman says. “We need to conduct an inspection on the vehicle.”

“Do you have a warrant?” Mr. Feinman asks. “Cause you’re not inspecting anything without a warrant. Do you know the Fourth Amendment? I’m free from warrantless searches.”

“I don’t need a warrant, there is no search here,” Stacy says as she attempts to perform linguistic gymnastics. “You’re speaking of an Amendment that classifies searches. We are not searching. [It’s] an inspection. The conveyance needs to be inspected for agricultural hosts.”

“So what part of the vehicle are you planning to inspect?” Feinman asks.

“We need to inspect the vehicle in the back and any ice-chests you may have on board,” Stacy responds.

“Oh, so you mean inside? That’s a search,” Feinman asserts – To which the officer unbelievably states again, “It’s not a search, it is an inspection.”

“That’s exactly what a search is,” Feinman says bringing up the Fourth Amendment again. “Don’t you understand the Bill of Rights?”

Stacy stands dumbfounded for several seconds before saying, “I’m not going to engage in this with you. I never said the word search. You’re talking about something other than the Fourth Amendment.”

Feinman then precedes to deconstruct the woman’s argument before asking if his family is free to go.

Stacy tells the man that he isn’t free to go and Feinman asks if he is being detained before the officer tells him “he” is free to go but his “conveyance” is not.

Feinman then asks the officer to differentiate between what a “search” and an “inspection” is before she fails to make any distinction saying, “I don’t have a definition of a search,” and reasserts, “I don’t search, I inspect.”

“So you think that word frees you from your obligations to the Constitution?” Feinman asks.

“I’m not really sure what your question is,” Stacy says, and Feinman reads her the text of the Fourth Amendment of the United States Constitution which says:

The right of the people to be secure in their persons, houses, papers, and effects, against unreasonable searches and seizures, shall not be violated, and no Warrants shall issue, but upon probable cause, supported by Oath or affirmation, and particularly describing the place to be searched, and the persons or things to be seized.

The Ag officer then cites that “the initial contact” officers had with the Feinman family, coupled with the fact that he had “a number of insects on the front of [his] vehicle,” indicated that the family may have been coming from some where that might be of concern.

Feinman continues to stand up for his Constitutional rights and leaves the warrantless checkpoint with Stacy telling him she is going to call police employees to bring the family back so they can have their liberty violated.

The footage then shows the Feinmans being pulled over by what appears to be officers with the Nevada County Sheriff’s Department and California Highway Patrol.

Feinman continues to assert his rights as officers attempt to extort him with citations, and  threaten to pull him out of his vehicle and have his children kidnapped by Child Protective Services.

Feinman asks what law he has broken and one officer replies that he is in violation of the “California Food and Agriculture Code,” before telling him to exit his vehicle so they can write him a ticket – and asserts in so many words that the checkpoint is not compulsory as individuals can refuse and “go back to Nevada.”

“But I live in California,” Feinman says. “Does the Agriculture code trump the U.S. Constitution? I’m a free citizen. Did you guys take an oath to defend the Constitution?”

“So you’re a Constitutionalist is what you’re saying?” another officer says after telling Feinman he is being unreasonable.

Then, unbelievably, the officer responds by saying, “we’ve had problems with this before.”

Feinman asks the officer again if he took an oath to uphold the Constitution and the cop tells the man not to sidetrack the conversation.

The officers then walk away as Feinman attempts to read them the Fourth Amendment, before – moments later – an officer identifying himself as an “off-duty” California Highway Patrol Sergeant informs the man that, “all [officers] want to do is write [him] a ticket and if [he] can’t do that then [officers] are going to have to break the window and get in and take [him] out.”

The Sgt. then claims Feinmans behavior is “totally unnecessary” and says “this is your choice right now… we have given you ever opportunity we can,” before – as if compelled by some supernatural force beyond their control – an officer smashes out the back window of the vehicle and arrest the occupants.

“This is a complete violation of my rights,” Feinman says.

“Well, maybe,” the officer that did the property damage stops short of saying.

In videos posted to social media, it is claimed that the vehicle was searched and impounded, that excessive bail was set for the family, and that one child was taken by CPS.

While many may decide from the footage that Feinman should have just complied with the officers and received a citation, the incident should instead be a lesson to all that illustrates what happens now to people in the United States who stand up for their rights.

There can be no compromise when dealing with petty tyrants – not if we wish to reclaim our liberty.

“If you stand up for your rights, this is what you get,” Feinman said in the footage. “Id like to be free to travel and this is what I get.”

Supporters of the Feinmans are asking that people stand up for principle and liberty by calling Nevada County Sheriff Keith Royal and demanding that he protect the U.S. Constitution:

Deputy District Attorney Anna Tyner can be reached at: