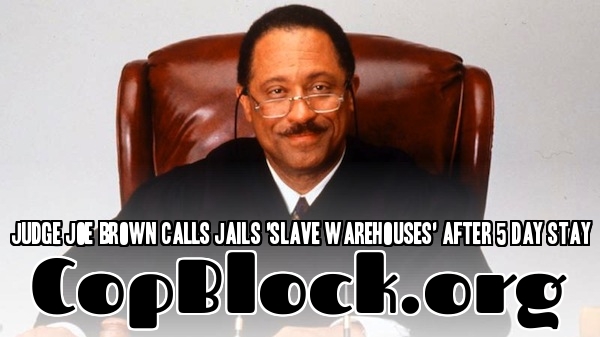 Judge Joe Brown of television fame, who was also an actual judge in the Memphis court system before that, recently found himself on the other side of the law and behind bars.

His five day stint in a Tennessee jail stems from an incident back in March during which he was found to be in contempt of court. While at the Shelby County Criminal Court examining juvenile court proceedings he was approached by a woman for assistance. After agreeing to speak on her behalf, Brown became irate and began to speak in a way that the judges sensibilities did not have the constitution to handle. He was found to be in contempt and recently served his five day sentence for the conviction.

During his brief stay in the jail, Judge Joe Brown began to see the  truth of that institution and immediately spoke out about what he discovered.

“Being inside a jail is like being in the slave warehouse. The problem with being in a jail is not whether you have TV sets, radios or air conditioning. It’s the fact that you’re confined against your liberty.”

“It’s no longer concerned so much with controlling crime as it is dealing with those people who are surplus labor. In other words, this country hasn’t paid enough attention to making sure everybody has a job. They get the first felony so you can’t vote anymore in life and you no longer can get a job, so there’s a lot of money to be made by locking people up.”

Brown also began speaking about plans for a new show, tentatively titled ‘True Verdict’, which is still just in the early planning stages.

“But we aren’t doing anything about correcting this problem, and I think it’s time that we develop a national and local leadership that’s committed to doing something about it, which will be, amongst other things, one of the points and topics that will be looked at [on the new show].”

While Brown is correct that jails are nothing more than slave labor camps, what he is still not getting is that every nation on earth is a slave labor camp ran by Uncle Tom governments on behalf of the wealthiest and most economically powerful. Jails are merely a more obvious form inside the larger one, just like solitary confinement is a more obvious form of jails right inside the larger jail. There is nothing that national leadership can do about the problem. Their existence is the source of the problem.

Just as the mega powerful and rich are a really obvious form of tyranny, those who do their bidding are just as complicit. The entire system is beyond any reform or repair. Judge Joe Brown, like many other people, is beginning to see the problems. Yet he, like many others, are still somehow convinced they can solve the problem by throwing new people in the gears. Those who get in the gears either learn how to roll with the machine or get gnashed up in its teeth. That machine, that system, is itself a recipe for the dish we are in.

As Pete reminded us the other day, you cannot hold the system accountable. The state system itself never has the same problems it creates for individuals, it benefits from them, so accountability is not even a possibility. For the state and all of its employees, especially police, there is no problem. It is running smoothly. And the better it runs, the more fucked we are.