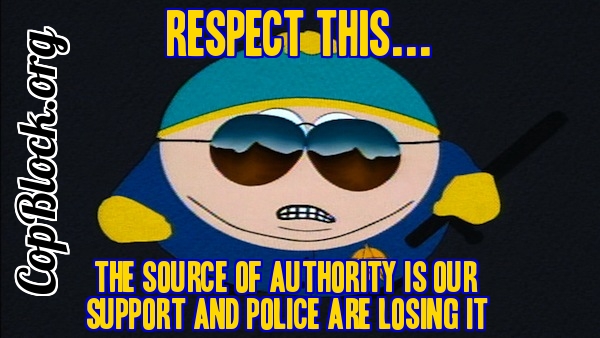 The following work was submitted to us by a regular reader who had some thoughts to share on the state of government, police and the people. The opinions belong to those of the author and not necessarily CopBlock.org.

Before All Consent Is Revoked

If your family members who are LEOs ALWAYS respect the constitutionally protected rights of all they encounter then I thank them.

But do take into consideration that the Boomer generation gave unearned respect to people in authority only to have their rights trampled on, their children watched it happen and were powerless to stop it. Their grandchildren now say, “Show me that you respect me and I’ll respect you.” Yet, those in authority (ironically, the boomers and their children) say, “I deserve respect because I have authority.” They are stuck in the same mindset that has been the cause for abuse of power since time began.

Every living generation today has lost faith and respect for government at every level (with so few exceptions that they aren’t statistically significant) LEOs are the local level arm of government. THEY have the choice to start implementing the type of government they want future generations to have. What they are abundantly displaying is their desire for the US to be a fully fascist police state regime. Most of the rest of the population refuses to let that happen.

I’m not saying that there aren’t good people. There are many. But when they end up in positions of power and authority they rarely remain that way. The cliché, ‘power corrupts’, is accurate. It takes a very specific personality type to truly want a position of power and authority over others. It has many characteristics of the psychopathic psychology. This is science fact, not opinion.

People are awakening, they are seeing the depth of corruption that pervades their governments, Local, State, and, Federal. They don’t like the way they are being “ruled over.”

Authority is only gained by the consent of the governed. When people no longer choose to be “ruled” in the way they are being, consent is denied. It is the LEO who has the choice of what laws to enforce, what rights to respect or violate. The LEO is the #1 force is deciding what type of governing the people will be subjected to. If LEOs choose to not be what the people, whose taxes pay for them, want as a governing force, the people withdraw their consent.

This current path will end only one of two ways. Either LEOs will be what their societies actually need and want them to be (not what our governmental overlords think they should be) or there will be a bloody revolution.

Consent for the current incarnation of authority is ever increasingly being withdrawn. LEOs, please listen to what the societies you serve are telling you. All life really does matter.