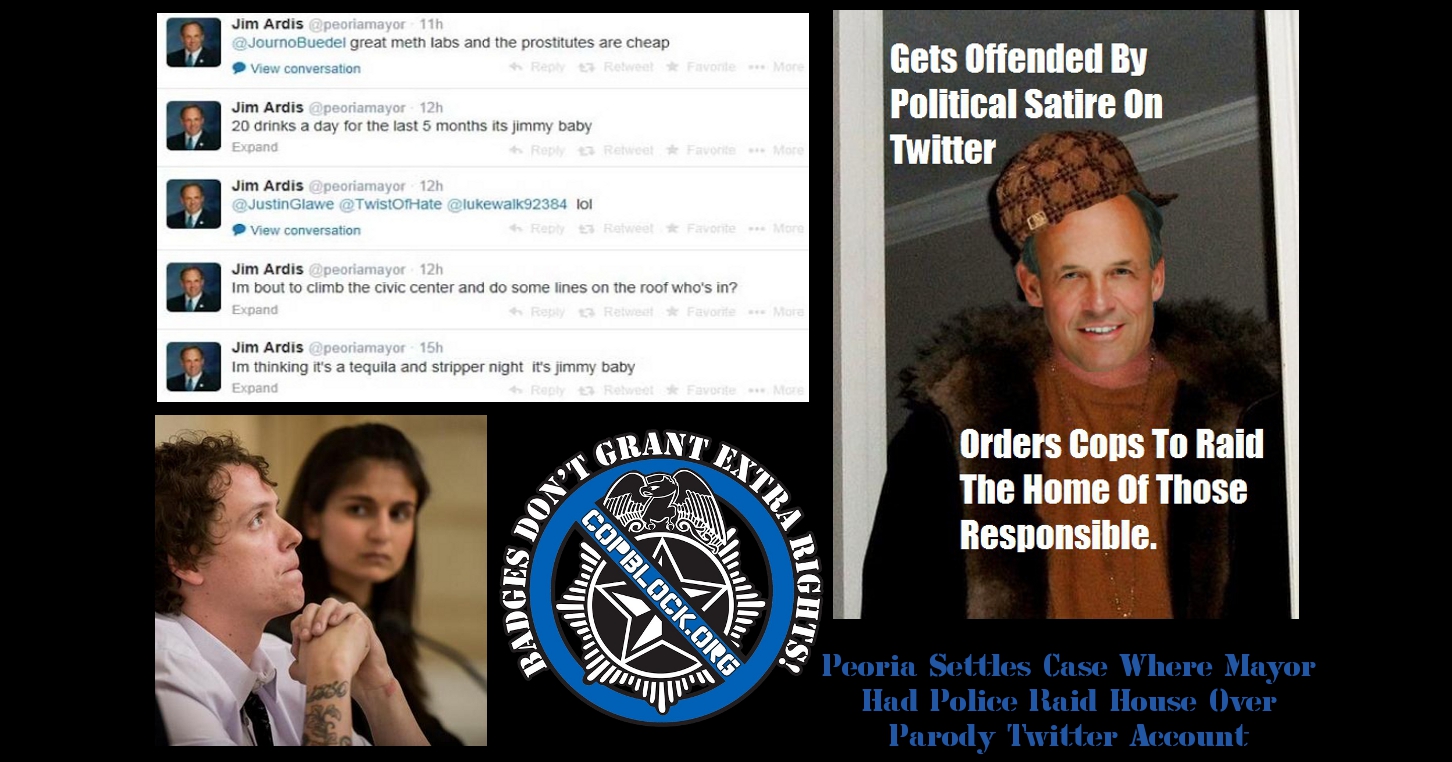 This post was submitted by Aaron Homer, via the Cop Block submissions Page.

In April 2014, the home of short-order cook Jonathan Daniel was raided by police. The dangerous crime he had committed that justified a gang of armed men kicking his door down and threatening him with guns was to start a parody Twitter account that made fun of Peoria Mayor Jim Ardis. Yesterday it was announced that the City of Peoria would be settling with Daniel for $125,000.

Via Ben Mathis-Lilley of Slate.com:

On March 9, 2014, a Peoria, Illinois short-order cook named Jonathan Daniel, now 30, launched a Twitter account using the handle @peoriamayor. On or around March 12, 2014, he labeled it as a “parody account.” Its content “ranged from ambiguous to offensive, with repeat references to sex and drug use,” the Peoria Journal Star wrote. (Sounds great!)

The actual mayor of Peoria is Jim Ardis, a Republican. Jim Ardis did not like Jonathan Daniel’s funny fake mayor account. On April 15, 2014, multiple police officers raided Jonathan Daniel’s home on the pretense of investigating him for the crime of “false personation of a public official.” Said the Peoria police chief of the account, which, again, was labeled with the word parody: “It appears that someone went to great lengths to make it appear it was actually from the mayor.”

Daniel wasn’t home at the time of the raid; police arrested him at the restaurant where he worked. But no actual charges were ever filed against him, and he sued the city on the grounds that, legally speaking, it  appears to be run by a gang of dopes who wouldn’t know the First Amendment from a hole in the ground. On Wednesday, the New York Times reports, the city announced it would pay Daniel $125,000 to settle his case.

“The city said it believed that it would have ultimately won in court,” the Times writes. Fire your city officials, Peoria. (Emphasis added.) If you dig into those links within the quoted text from the Slate article, you see that three people who were at the home (Daniel actually wasn’t) were taken into custody for questioning. Also, cell phones, computers, and other electronics were seized in an effort to get to the bottom of who had hurt the mayor’s delicate feels on the internets.

That and the $125,000 bailout of the mayor and police that resulted from the lawsuit seems to be a pretty good use of taxpayer funds and government priorities. I’d have to say that I very much agree with the (highlighted) advice in the last line of that Slate article.