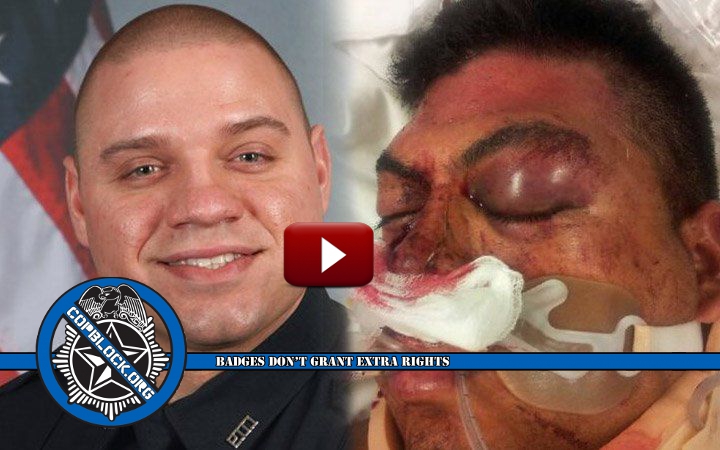 Over a year ago, Ernesto Rodriguez was arrested after a domestic dispute call. Later a dashcam video (see below) was released showing him being beaten by the police officers responding to that call. Charges from that arrest weren’t filed at that time. However, earlier this month Rodriguez filed a lawsuit based on the dash cam footage, which clearly shows him being punched in the head numerous times. All of a sudden, the Knoxville Police Department remembered to file those charges of resisting arrest and assaulting officers. The timing is probably just a coincidence.

According to the lawsuit, Officer Kimber responded to a domestic incident at Roaming Drive on July 9, 2014. The 911 caller said Rodridguez had thrown a knife, then walked down the street.

Office Kimber found Rodridguez nearby, made him stand with his stomach on the squad car’s hood and tried to cuff him even though Rodridguez said the cuffs were too small to fit on his wrists. Rodridguez, who is Mexican and spoke very little English, says he screamed in agony and attempted to let Kimber know the cuffs were too tight and hurting him. He says Kimber continued to try to force the cuffs on his arms. The lawsuit claims, the officers were only able to handcuff Rodridguez after he passed out. He was rushed to University of Tennessee Medical Center’s trauma center. Rodriguez said he was treated for serious, life threatening injuries, saying he had visible scarring on his wrists from the cuffs and had several face and eye surgeries.

The police claim that Rodriguez’ injuries were the result of him hitting his head on the ground. Of course, when you beat someone until they fall unconscious and hit their head on the ground, you’re kinda still responsible for that.