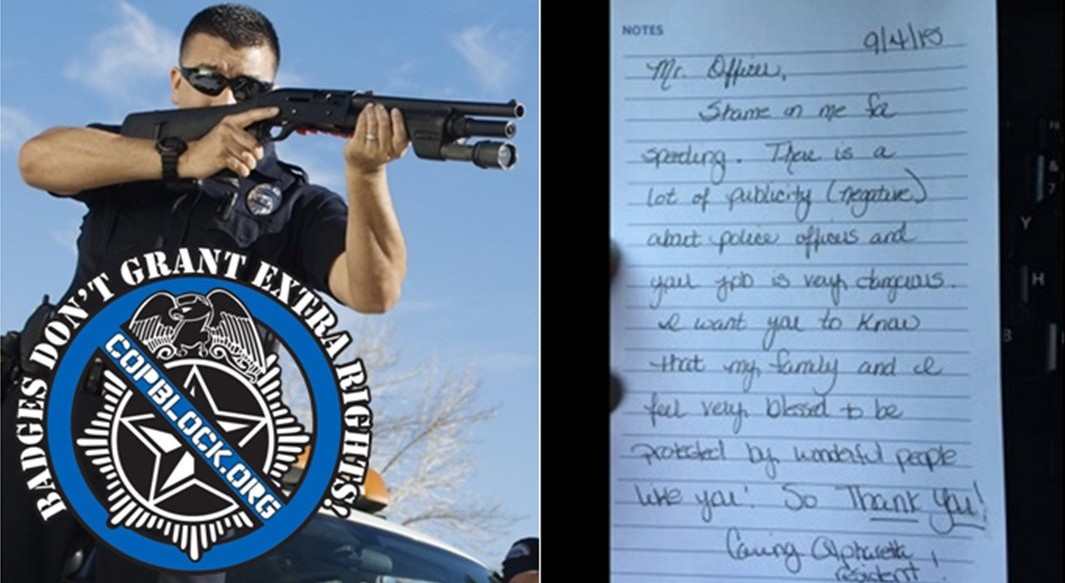 In an epic display of Stockholm syndrome, the Georgia Department of Public Safety is gloating about a handwritten “thank you” note they say one officer received from a woman after he ticketed her for speeding.

Stockholm syndrome is a form of traumatic bonding in which a victim develops emotional ties towards an aggressor that may harass, beat, threaten, abuse, or intimidate them.

Named after the six day 1973 Norrmalmstorg bank robbery in Stockholm, Sweden in which hostages became emotionally attached to their captors, rejected assistance, and even defended the robbers – the condition was originally described by Freud as a psychological defense mechanism that enables a victim to adopt the same values as their aggressor allowing them to cease considering them a threat.

There is much that could be said about how the condition has become the norm in the way most individuals view police and government in general, but Fridays incident in Alpharetta, Georgia typifies the syndrome perfectly after the Department of Public Safety posted a letter on social media supposedly given to an officer at the end of traffic stop.

Shame on me for speeding. There is a lot of publicity (negative) about police officers and your job is very dangerous. I want you to know that my family and I feel very blessed to be protected by wonderful people like you. So Thank You!

Unbelievable. Why on earth would someone thank a violent aggressor for accosting them on the highway at gunpoint and extorting money from them for failing to abide by something politicians say they owe the money for doing?

One reason is because law can distort ones sense of morality.

The great 19th century classical liberal French economist and philosopher Frédéric Bastiat famously said, “When plunder becomes a way of life for a group of men in a society, over the course of time they create for themselves a legal system that authorizes it and a moral code that glorifies it.”

In his 1850 work The Law, Bastiat defined law as “the collective organization of the individual right to lawful defense” but said:

It is impossible to introduce into society a greater change and a greater evil than this: the conversion of the law into an instrument of plunder. What are the consequences of such a perversion?… In the first place, it erases from everyone’s conscience the distinction between justice and injustice.

No society can exist unless the laws are respected to a certain degree. The safest way to make laws respected is to make them respectable. When law and morality contradict each other, the citizen has the cruel alternative of either losing his moral sense or losing his respect for the law. These two evils are of equal consequence, and it would be difficult for a person to choose between them.

The nature of law is to maintain justice. This is so much the case that, in the minds of the people, law and justice are one and the same thing. There is in all of us a strong disposition to believe that anything lawful is also legitimate. This belief is so widespread that many persons have erroneously held that things are “just” because law makes them so. Thus, in order to make plunder appear just and sacred to many consciences, it is only necessary for the law to decree and sanction it.

If we consider it a moral outrage for any other thug – not dressed in a costume and shinny badge – to accost us on the highway with threats of extortion and robbery, why would we exempt the agents of the state from the same ethical standard? Either we believe in universal moral principles or we don’t. The average American pays around 56 percent of their adjusted income in all state, local, and federal taxes – not to mention the hidden tax of inflation courtesy of Federal Reserve meddling, which has devalued our currency by over 95 percent over the last century.

If that wasn’t enough, like vultures, highway men of all stripes are sent out by the state to embezzle and extort even more from us for any one of a million ridiculous laws or regulations.

George Bush and Barack Obama can melt the faces off of children with personally sanctioned drone strikes, and criminal banksters can steal billions, but if you fail to signal when turning, you will be hunted down like a dog, pulled over, embarrassed in your community, treated like a criminal, have your property ransacked, and written a ticket for in some cases upwards of a weeks pay.

And that’s just the beginning. The next frontier in revenue collection has arrived. Computers attached to speeding and red-light cameras now read our license plates and automatically send tickets to our homes. This is already common practice in many states across the nation like Maryland and Ohio – though citizens are putting up a fight.

Rather than attempting to help the people they claim to serve by refusing to extort them for meaningless and victimless crimes like drug possession and moving violations, police agencies have responded with mass-ticketing blitzkriegs.

One of note was revealed last year in the very same state the “thank-you” letter came from when a local news investigation found that Atlanta area police and parking enforcement wing Park Atlanta were issuing almost double the number of tickets normally written in prior years. Park Atlanta wrote 141,000 tickets in 2010. In 2012 they wrote 221,000, the investigation found, with the city receiving millions of dollars in extra revenue.

Mayor Kasim Reed predictably said at the time that money was not the motivation for the increase. “The ticket and traffic enforcement process is actually a tool in combating crime,” Reed said. “One of the off-shoots of that is you do have an increase in revenue. “Police will be issuing more tickets to keep more people safe.”

Its not hard to understand that like war, law is a racket. Most Americans, even if not particularly proficient, instinctively know this. Like locust they descend upon us – the parasitic agents and enforcers of the state.

According to statistics compiled by Statistic Brain Research Institute, 112,000 people receive a speeding ticket every day in America at the average cost of $152 a piece. That means out of a possible 196,000,000 drivers on the road, 41,000,000 are ticketed for speeding annually  – over 20 percent.

That puts the total amount of money paid in speeding tickets per year by American citizens at around $6,232,000,000 making the average annual speeding ticket revenue per U.S. police officer $300,000, with only 5 percent of ticketed drivers contesting the fines in court.

And is it any wonder they don’t? By the time one invests the time and money fighting something in court, even if they win, it is the system that always wins in the long run. Also keep in mind that the aforementioned stats relate only to speeding violations. (It appears governments don’t keep track of how many tickets they write.)

But traffic laws are a necessary evil right? Well, consider some of the evidence to the contrary you may not be familiar with.

As far as safety is concerned, studies have shown that things like speed limits have no positive effect. In fact, they have a negative effect and can actually make roads more dangerous. Especially when set too low. Also, studies and observations made in towns that have lost electric power or had all their street signs are covered up, found that instead of chaos ensuing, traffic actually tends to moves faster, with more efficiency as the road becomes safer, and people naturally negotiate themselves around each other.

Staddon says a lesson should be taken away from the UK’s approach to traffic control. There are very few mandatory stops. The stop “signs” are just dashes in the road, and they don’t really mean stop, just yield. Instead of four-way stop signs, “roundabouts” are utilized whose only rule is to yield to traffic coming from the right. Also, in the UK, speed limits are determined by road type, and are not set as arbitrarily as they are in the U.S.

The result, Staddon says, was a 36 percent lower traffic fatality rate per mile from 2003 to 2006 than existed in the U.S.

When looking at traffic-related death statistics around the would, it would first appear countries with fewer traffic laws have higher fatality rates. Going by sheer numbers alone, this may be correct, but large countries like China, India and Brazil are the most populated in the world.

Lack of infrastructure and medical care predictably can account for some of this disparity also, but when examining the data per 100,000 vehicles on the road, a different picture emerges. Even when looking at experiments of repealing traffic laws and regulations in western cities, the truth is made clear.

According to a 2006 Der Speigel article, the number of traffic accidents in Drachten, a city in the Netherlands, “declined dramatically” after traffic rules were repealed by traffic guru Hans Monderman, who replicated similar successes in other cities in Germany, Denmark, and Great Britain.

“The many rules strip us of the most important thing: the ability to be considerate. We’re losing our capacity for socially responsible behavior,” Monderman, who is now dead, said. “The greater the number of prescriptions, the more people’s sense of personal responsibility dwindles.”

Monderman makes a good point here. Victimless crime laws can prevent nothing and generally have the opposite of their desired affect. People aren’t just idiots that can’t get by without the benevolence of government traffic laws.

I mean, think about it. If traffic laws didn’t exist, would you just dive aimlessly without paying any attention? Of-coarse not, you would pay more attention – as a beautiful and spontaneous order emerges on the roads free from the coercive and dead hand of the state.

Aspects of the Monderman Model have been also been tested in the U.S. in places like West Palm Beach, where the reconfiguration of traffic layout and laws resulted in a doubling of property values as increased pedestrian traffic attracted new shops and apartment buildings.

I have posted about some of this information before but I feel that it is completely pertinent within the context of Stockholm-syndrome-style thank-you letters for speeding tickets to rehash it to some extent.

It is very important that we understand that because of the economic structure of government policing, there exists no incentive for officers to “serve and protect” like the unidentified supposed female states in her note.

Police departments don’t make money by expending resources looking for the burglar of your home. This is why the percentage of cases successfully pursued against actual violent/property criminals is said to range in the single digits. Along with coercive taxation, it is the enforcing of victimless crime laws that fund police departments and local governments.