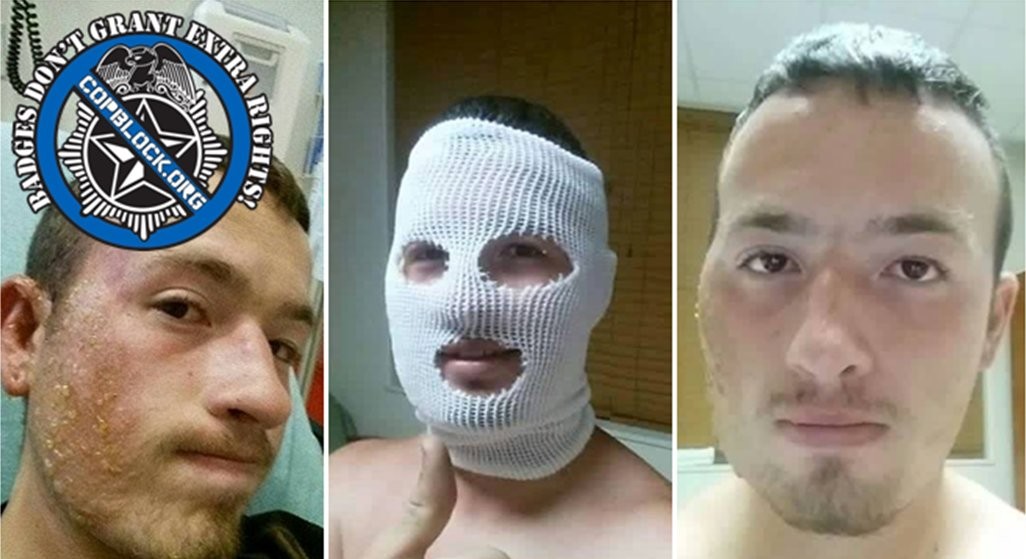 Saturday, a Mississippi mother took to social media to relay an incident in which she says her son was “badly burned and brutalized” by Pearl River County sheriff’s deputies.

Marisa Amann says that on Friday at around 3:30 pm, her son Brent Culpepper was a passenger in a truck stopped in a line of traffic waiting on road workers that were laying down new asphalt.

Amann contends that the workers were upset at the driver of the vehicle because he had “marked up the new asphalt,” and called the cops before a “Pearl River County sheriff’s department truck pulled up behind the vehicle and another approached them from the front and told the driver to get out.”

According to Amann, her son was in the military, spent four years as a local sheriff’s explorer, and has family members who are former cops. So, when an undercover Narcotics deputy responded to the passenger side of the truck and asked him for his ID, he asked the officer why.

It is at this point, the mother says, that the deputy opened the door, told Brent to get out of the vehicle, and then grabbed him and slammed his face into the newly laid asphalt.

Amann says that her son, who was screaming in agony, repeatedly told the officer that his face was burning and tried to lift it off the pavement but “the deputy shoved his face back onto the burning hot asphalt” – which paramedics latter determined was about 300 degrees.

This is when two more deputy’s jumped on Brent, Amann says, and all three “held him down with their knees digging in to his back and their hands pressed on his face [and] handcuffed him.”

The mother said Brent was then taken across the road where he sat for about 30 minutes in the summer sun before officers moved him under a shade tree, poured water on his face, and then called paramedics when they saw his burns were getting worse.

Meanwhile, Amann said, Brent asked the officers why he was cuffed and on what charge he was being held, but deputies refused to answer him other than to say “he was in custody.”

Brent reportedly remained handcuffed while he was loaded into an ambulance and when paramedics inquired about whether or not he was in custody, a deputy told them yes but again refused to say what for.

“Once that was revealed,” Amann said, “the arresting deputy entered Brent’s room a total of three times” and placated the situation by “asking if he was alright,” and being “all nice to him.”

When Brent asked the officer for the names and badge numbers of the deputies involved in the incident, “he was told he could get all that info on the report,” the mother said, but added that it was at that point that the cop left and didn’t come back. Brent then reportedly asked nurses if the officers were still there and he was told that they had left and released him from their custody.

Amann says family contacted the sheriffs department on Saturday morning and was told Brent was never arrested and would not be charged with anything. Additionally, the mother said, no report had been filed about the incident.

Family are currently wanting answers as to why their loved one was brutalized without being charged with a crime and a phone call made by this investigator to the Pearl River County sheriff’s department seeking comment about the situation was relayed to Chief Deputy Shane Tucker who is expected to get back to me when he returns to duty on Tuesday.

Amann says Brent is currently being treated in the ICU at the Jackson Burn Center where he underwent “cadaver skin grafting surgery and now is showing signs of bleeding internally.”

The mother says Brent doesn’t have medical insurance and is facing numerous additional surgeries for the second degree burns that will make him miss work and drills he participates in as a reservist in the military. The family is seeking support for help covering medical expenses and have set up a fundraiser account which you can donate to here.

Picayune County Sheriff David Allison says Brent will be arrested and charged with failure to comply, resisting arrest, and possession of beer in a dry county once he is released from the hospital.

Allision says Brent was injured after refusing to comply with “routine requests” to identify himself and exit the vehicle, forcing one of his deputies to pull him out of the truck where he continued to resist and wrestled with the officer on the newly laid asphalt.

Allison maintains that Brent smacked the officer away as he attempted to grab him and pull him from the truck and said, “None of this would have ever happened if [Brent] would have cooperated with the officer and let him do his job. This elevated because of his actions.”

So in other words, when you are a passenger of a vehicle and are under no suspicion of committing any crime what so ever, and stand up for your right not to be identified when you are asked, “papers please,” by highway thugs – and you additionally refuse to be violently removed by said thugs – its really your fault when those thugs act as if by some magical force outside of their control, they have to brutalize you.