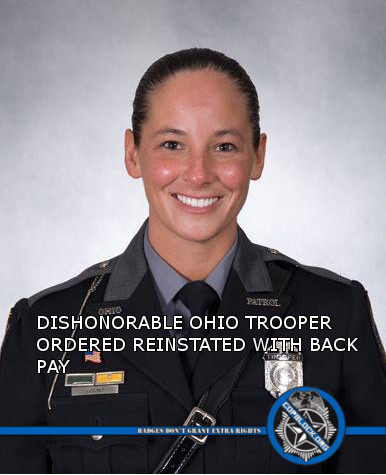 I bring you another story of the Thin Blue Line once again at work.  An arbitrator has overturned the job termination of dishonorable Ohio Trooper, Tammy Soto, citing that the Highway Patrol failed to prove that she falsified a OVI citation of a Lorain Officer in September of 2014.

On April 1 of this year, Trooper Tammy Soto with the Ohio State Highway Patrol, was terminated from her job after an incident that took place on Sept. 13, 2014.  Soto had responded to a call of a wrong way driver on Rt. 2 in Amherst, which is located in Lorain County, Ohio.  When she arrived on the scene, Trooper Soto found a truck facing the wrong way on the road driven by Lorain Officer William Lachner.

She then told Lachner to sit in the backseat of her cruiser.  She then tells Lachner to keep his mouth shut as she shuts off her microphone and then got into Lachner’s truck and drove it over to the other side of the road so that it was facing the right way.

The Highway Patrol investigation found that Soto had falsified Lachner’s OVI citation in order to land him in a more lenient court.  Lachner kept his job even though he was driving while impaired and only served a 2 day suspension.  The patrol concluded that she didn’t do a thorough investigation by administering a Field Sobriety Test or even inquire as to why he was driving on the wrong side of the road.

The arbitrator ruled that Trooper Soto should be reinstated with back pay.  She will have to serve a 3 day suspension.  The arbitrator went on to state:

“The manner in which Grievant performed her duties handling the Lachner OVI was less than satisfactory. There’s really no dispute what Grievant did or did not do at the scene where William Lachner was stopped,” the arbitrator wrote.

It’s quite apparent that even when a department tries to do the right thing in weeding out the bad officers, there is always someone in a higher power to quash that and let them continue in their behavior that shows a total lack of integrity.  Trooper Soto felt the need to protect a fellow officer over the public’s safety by fudging her investigation.  Her actions are a prime example of why the public’s trust and respect of police officers across the country is seeing an all time low.

Soto has demonstrated that she can not be trusted in the performance of her duties under code of conduct and the oath that she took which states:

(A) Code of ethics (1) Members of the Ohio state highway patrol in recognizing their responsibilities as public servants, shall be particularly attentive to citizens seeking assistance and/or information or who desire to give evidence or register a complaint. Members shall broaden their knowledge of the state and its laws, better enabling them to satisfy the demands of the public.

(2) They shall accept their responsibility to the public by being punctual in their engagements and expeditious in the performance of their duty.

(3) They shall regard their office as a public trust and in the discharge of their duties be mindful of their primary obligations to serve the public efficiently and effectively.

(4) They shall administer the law in a just, impartial manner, affording the same reasonable treatment in all cases. They shall recognize the limitations of their authority and at no time use the power of their office for their own personal advantage.

(6) They shall not limit their effectiveness in the administration of their office by accepting gratuities or favors.

(7) They shall cooperate fully with other public officials to assure the safety and general welfare of the public. They shall not permit jealousies or personal differences to influence their ability to cooperate with other members of the division or other agencies.

(8) They shall add to their effectiveness by diligent study and sincere attention to self-improvement, including physical readiness. They shall welcome the opportunity to disseminate practical and useful information relating to matters of the public’s safety and welfare.

(9) They shall so conduct their private and public life that the public will regard them as examples of stability, fidelity and morality.

(10) They shall bear faithful allegiance to their government, and be loyal to their profession. They shall accept as a sacred obligation their responsibility to support the constitution of the United States and the constitution of the state of Ohio. As public officers, they shall consider the privilege of defending the principles of liberty the greatest honor that may be bestowed upon any person.

(B) Oath of office

Every member of the uniformed division of the Ohio state highway patrol shall make the following oath of office at the time of appointment as a trooper. Feel free to contact the Ohio State Highway Patrol and voice your opinion of them putting a criminal back in costume with back pay.  Keep in mind though that the decision was that of the arbitrator and under arbitration law, the decision is final and can not be appealed.  Even though the Ohio State Highway Patrol may have tried to do the right thing in the investigation, it seems they are lacking in their screening process for hiring those with a higher moral compass.

These are the types of people who are employed by the patrol.  I’m not saying that the patrol is rampant with sexual deviants and oath breakers, but I don’t trust them or feel safe when they are around.  They may investigate the situation when it occurs, but how are these officers even getting hired in the first place?