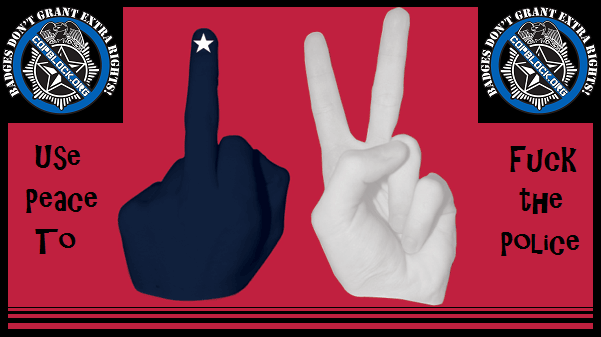 I am often accused, as are many of my fellow CopBlockers, of supporting violence against police. Let me be very clear about this. I do not support any form of aggressive violence, regardless of who commits it. It is a form of weakness and depravity. Those prone to commit violence against others for any reason other than self-defense, and even then only as a last resort, are the least among us. Whether you are a common street criminal or one in a badge, killing others destroys you and makes you a lesser person. Whether you decide to live with being okay with what you did or it eats you up, you are forever changed. Which is why most of us would hesitate to kill even when there was danger. There are worse things than dying. Those who did not weigh this into their decision to kill are not psychologically okay. They are predatory aggressors. There is no line between criminals and cops, so much as there is one between the peaceful and the aggressors.

Recently there have been a lot of high profile acts of violence committed by people against the police. It is not that cops are in any more danger than ever before, in fact, deaths by homicide among cops continues to lower, as does violent crime in general. Yet our media likes to create black and whites. They like to divide very complex issues into two sides and pit them against one another, because people line up to watch that garbage and join sides in it. The US vs. THEM mentality is simply a great sales trick. Yet in the process the message gets skewed and the truth takes a back seat to the true-or-false narrative created by media and government pundits.

Suddenly police and their supporters want to blame people like me for all of the bad things that ever happen to them. Forget that I have no control or authority over anybody but myself. Nevermind that I have openly stated that I do not support aggressive violence against anyone, cops included. And while you are at it go ahead and ignore the fact that it is the actions of police that have created the movement against them, that the messenger is not responsible for the message. Just brush all of those convenient facts away because facts and shit do not matter when people stop thinking critically and instead just react to everything emotionally.

I would venture to say that at least 98% of policing activists would wish no harm on an officer. We are almost always first and foremost activists for peace. That small fraction that does wish to incite or see violence committed lives at the margins. They are a product of their own psychotic urges and often driven by desperation. Desperation kills. It kills when the bottom of society become desperate to fight back just as it kills when the police become desperate with fear through the social conditioning that deludes them into thinking their lives are always in danger.

You will not help make the world a better place by committing violence against police or any other ideological enemies, so don’t do it. No matter how desperate you have become, your actions would only make your life and your world worse off than before. There is no heroism in murder. It is a gross act of human depravity. And I think I speak for my fellow CopBlock.org contributors in this.

This goes for police, as well. Fearing for your life does not mean you didn’t murder. When you chose to put yourself in that situation as an agent of peace, peace is the highest priority, not your life. If you don’t like that you shouldn’t be in this line of work, point blank. You cannot instigate a situation that creates fear and not expect to feel some of that yourselves. It is not a license to kill.

So all of you stupid fucks, criminals and cops, stop fucking killing. Stop initiating violence or other forms of aggression. You are all the problem. It is your weak little minds and stupid little games that the rest of us are caught in the crossfire of. And this, dear LEO’s, is why we are working to get rid of your institution. To free you and ourselves so that the escalation of aggression that systematic institutionalized violence has had on society can finally be ameliorated. We don’t want you dead. Just obsolete.