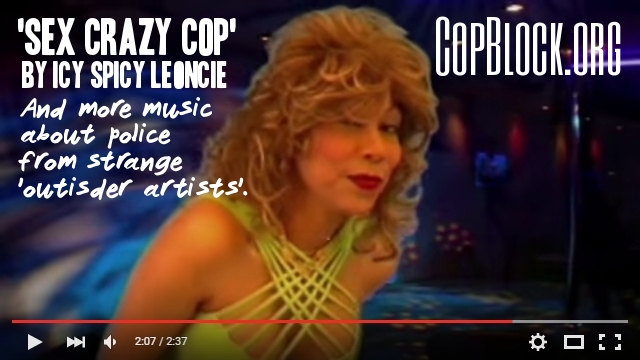 ‘Outsider Music’ was a term created by music journalist Irwin Chusid to describe music made outside of the systems and norms of popular commercial music. The music is often very amateur in one way or another, whether it is poorly recorded, performed or composed. But these breaks from the norms and deviations also make it a very enjoyable listening experience. It provides sounds and musical perspectives you have not heard repeated ad nauseum in the recycling center of popular music. Yet as you get further out there into this musical territory, you get further out there with the individuals who create it.

Given that the makers of this music are so far out there, they usually have a pretty interesting relationship to authority. The theme of police comes up often in outsider music from a number of perspectives. Here are some great examples.

Icy Spicy fuckin’ Leoncie, right? I will forgive you if you wanna spend 20 minutes watching more of her videos before finishing this article. I would, too.

‘Sex Crazy Cop’ follows the typical hypersexual themes and bizarre relationship issues with men that her songs are often filled with. However, despite how far out there Miss Leoncie may be, she does hit the nail on the head. Having numerous extra-marital relationships on the job, with uneasy questions about a power imbalance between a cop and his partners, does seem to be a theme we see fairly often in news stories. The song is a true story a number of times over and even someone as seemingly detached from reality as Icy Spicy can deliver a good humorous song blow to the true life adulterers who use their power, position, prestige and community resources as cops to get down with some good old cuckolding.

Someone shared this video on our Facebook wall, sort of reminding me how intertwined outsider music was with messages about police. Now Randy Duck here doesn’t necessarily seem too far out in his style or opinions. But ‘Thin Blue Line’ does maintain a simplicity that is often inherent in outsider music, not to mention his poor vocal talents. What we do have here is authenticity. Randy is gonna tell it you ya ‘like it is’ and he will be damned if his very own voice ain’t good enough to share his message. Beyond his own shortcomings he perseveres and stays his course, because, fuck your ears.

And it is also terrible. The music is typical of the most generic country ballad/shuffle of the 1980’s. It is as though a robot who studied only the worst charting country singles of 1984 used those songs and developed a program to write this song. While the music is well performed and recorded for outsider music, it is entirely just an engine to drive his lyrics home. Which makes the whole thing somehow both sadder and more awesome at the same time. Likewise, his ideas on police and policing are of very low quality. It is a regurgitated message of talking points spouted by public officials into the idiot megaphone of mainstream media. And if you think that was bad…

Outsider music is nothing new. It has been happening as long as there has been popular music of some sort or another. But due to recording constraints it was not until the middle part of the 20th century that it was possible for their work to be recorded. Yet when recording technology became widely available and affordable to rent or buy, outsider music took off like never before with guys like Harry Burgess tirelessly working to bring you their musical interpretations of this crazy existence of ours.

This is his most known track. In fact, this song may have been the very center of his recording career. He may have felt its message so strongly that he became a song writer despite his clear lack of talent or aesthetic finesse just to get this out there. And I am glad that he did, even though it is totally moronic. The song is about a guy who becomes a cop out of his noble spirit and respect for the profession only to find himself immersed among “hippies and yippies and commies” at the 1968 Democratic National Convention. The lyrics would not sound strange or unfamiliar to anyone today used to hearing the FOX News crowds strange hateful beliefs. The great thing about outsider music is that it transcends any literal interpretation and thus even such a terrible copsucking song of yesteryear can sound fresh and exciting today.

Steve Lieberman, aka: the Gangsta Rabbi is a mentally ill punk rock musician from Freeport, New York who writes and plays all of his own music and lyrics. He is highly prolific, sometimes genius and other times just confusingly noisy. His songs feature bass, drums and flutes with other instrumentation sprinkled throughout.

New York State Police is pretty typical of police anti-punk in its angry commentary. But it takes some jagged twists and turns through Gangsta Rabbi’s strange aesthetics, perceptions and interpretations of those themes. This is definitely not a song you listen to over and over, but it does bear a listen or two just to take in and appreciate its uniqueness and appeal.

Moving from the NY to the Illinois State Police here with a true fucking legend, Wesley Willis (R.I.P.). Among outsider musicians he was one of the great mutants, as well as great talents, and will always hold a special place in the hearts of people who like slightly (or fully) off-kilter shit. He was featured in a documentary about artists struggling with severe mental illnesses and gained some notoriety through that. However, until his death, he was always famous in his native Chicagoland area and the surrounding midwest towns where he would stop during his endless touring. You can always tell if someone met Wesley in real life because they will have a story about him and headbutting, as such was essentially the mans form of shaking hands or high fiving.

Wesley’s music and themes had both some major consistencies and major shifts. While he was largely formulaic in his solo work, his attitudes towards authority often shifted along with the changing mental landscapes brought on by his illness. So while he is doing some typical copsucking in the song above, you will find him in the role of criminal in the song below, taunting the subject of his lyrics to call the police on him as he commits his awful crimes.

Viewing the police through the eyes of these outsiders, the disenfranchised, the crazy, the simple or outright clueless, we can catch echoes of our own mainstream ideas about police. But these songs also turn the most hyperbole heavy compulsively and mindlessly pro-police or aggression-suggesting-anti-police rhetoric of extremists on its head, revealing the ridiculousness of those ideologies from the fragility of their basic premises. This is the great thing about outsider art, is that it reveals our world from a slightly different angle, while in doing so reveals the equally vapid ideologies and aesthetics of mainstream culture and media.

This last one doesn’t have anything to do with police, but you cannot mention outsider music without a shout out to the almighty Daniel Johnston. Enjoy!