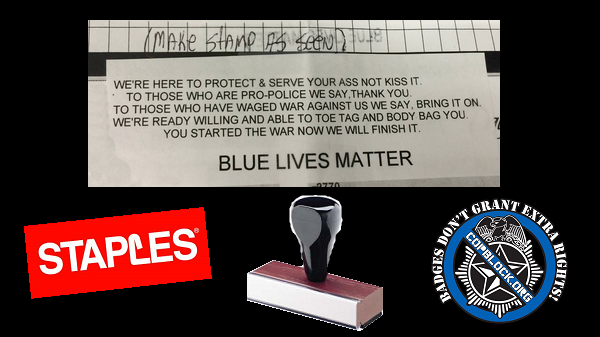 As the paranoid delusions of cops nationwide begin to take even  greater heights of crazy violent, things begin to get equal parts bizarre and disturbing. On Monday a Northern New Jersey Staples received a request from a police officer that contains the following terroristic message:

“We’re here to protect & serve your ass not kiss it. To those who are pro-police we say thank you. To those who have waged war against us we say, bring it on” The grammatically illiterate request says. The stamp becomes more heinous when it states “we’re ready willing and able to toe tag and body bag you. You started the war now we will finish it.”

The Staples employee who took this request then posted a photo of the request, as seen above, to the Reddit police accountability subreddit- r/badcopnodonut. The Redditor ‘/u/Carinamachina’ says that after a discussion with his boss it was decided that they would not be making these stamps in their store. The identity of the officer has not been released.

I am glad that Staples stood up against this bully and denied his request. I am certain that once this story gets around, cops will soon want to boycott Staples, as they seem wont to do whenever a business or it’s employees refuses to serve them on grounds of their own moral stance, as was recently the case with Arby’s and Jimmy Johns. The stamp request comes during a media manufactured ‘War on Cops’ that doesn’t really exist. Cops are actually facing less danger all of the time while themselves becoming a greater threat to the liberties and lives of citizens. However, the facts do not seem to phase the cops who are letting themselves be led down a violent and destructive path by a false narrative created by a fearmongering mainstream media. While some of them are doubtlessly just being tricked into believing this paranoid nonsense, some officers seem to be embracing the possibility of violent opposition as a reason to themselves kick up their own disturbed thoughts and behaviors, as seems to be the case here.

While cops break out the tin foil hats and bullet proof vests, citizens are given more reason to fear the police, which could actually create more danger for both sides. It is time for whatever sensible police are left to take a stand, announce the facts, and attempt to de-escalate a growing situation. There is no ‘War on Cops’. But if police violence continues to increase and mix with media-manufactured paranoia, that could become a possibility. I hope that doesn’t happen.