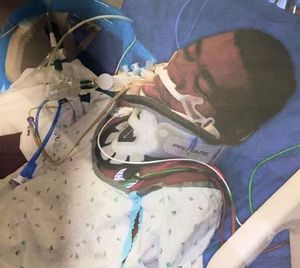 Missouri has been a hotbed for police brutality and controversy for some time now. It’s so bad that riots and wide scale instances of rebellion have been filling the mainstream media programming for as long as some of us can remember. However, what the mainstream media does not say is that it’s not the people’s fault. They will focus on the people rioting and not the cause of the riots. They will pick apart one case of brutality and portray a mistake, instead of a long history of corruption. The media likes to blame everyone but the police. Sometimes, this is not the case, and finally things have gotten so bad in certain areas that even the conservative media has realized it and began reporting on it. Such is the case of Bernard Scott. A 44 year old man that was so egregiously violated by the state, that even the police supporters have been silent about the incident.

So here’s the scoop, from what I have put together by a number of sources is that sometime in September 2014 Bernard Scott was arrested in Pine Lawn, Missouri for just over $300 worth of traffic tickets. Why tickets would land you in jail in Missouri is the first piece of “what the hell” in this story, but it gets much worse! At some point between being arrested and getting to the jail, Mr. Scott was injured so severely that the police called an ambulance for him to be checked out. Once the paramedics arrived at the jail, they were instantly so concerned for the man, they began paperwork to rush him to the hospital. The jail personnel began getting Bernard dressed into his street clothes to be transported. That’s when a member of the administration called the whole thing off and told the paramedics to leave. The paramedics protested the decision but were overruled by the jail staff. Why? Because he didn’t pay the $300 dollars required for his release.

Things just get worse from here. About 20 minutes later, a second ambulance was called for the same man. This time, with a report that he was unresponsive after hanging himself with a shoelace. This man that was so injured he needed immediate care was somehow strong enough to attempt suicide?! Well, that’s what jail staff wanted us to believe. Upon being rushed to the hospital, and worked on for nearly an hour, the man survived! He was in really bad shape and remained in a coma for nearly a month. Then he woke up. Bernard Scott then made a statement about the claims of a suicide attempt “why would I try to kill myself?! It was a traffic ticket!”

This bizarre story is so similar to what happened to Sandra Bland over this past summer- the difference being that the victim survived. The police are no longer able to contain the public backlash from their excessive force and their murderous actions. The end of their terror is finally at hand. That is not to say that they won’t continue to try to silence the masses and use media to “spin” all of these cases as “a few bad apples”. In this department, at least, even the mainstream media is calling for a total shutdown and bringing in other departments to handle the policing. The department is just two miles from Ferguson, MO. The same Ferguson, MO that became famous when Michael Brown was gunned down by an officer while his hands were up, bringing the famous slogan “Hands up don’t shoot” into existence. The thing is these horrible cases are just the tip of a long history of police abuses there. Here is what happens when you type “Ferguson police brutality” into Google. That’s just the beginning because if you type in “Missouri police brutality” this happens.

There is an entire Facebook page dedicated to Missouri Police Complaints. When things get this bad, where else is the public to go but to rise up and revolt against their aggressors? How can the mainstream media blame the rioters in Ferguson, when there is a page just for the top 15 worst cases against the police there?
May god have mercy on them.