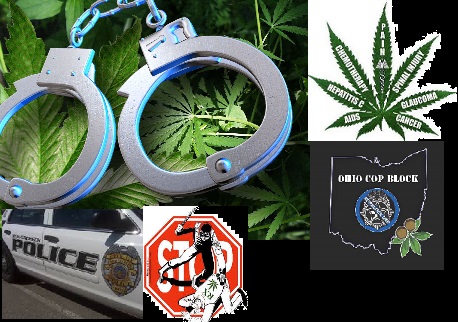 A WHIO report from the Sept 1st reads:

Beavercreek police and drug agents with ACE Task Force served a search warrant at the house in the 3800 block of Knollwood Drive around 10 a.m. About 20 marijuana plants were recovered, along with a small amount of cash.

Police said the homeowner was not arrested and the case is under investigation.

At the same time, Ohio voters are trying to get a marijuana legalization bill passed through the state. A group called Responsible Ohio is pushing a measure that grants all the growing rights to 10 growers for the whole state.

After some pressure from other groups like the Ohio Rights Group, a group dedicated to getting patients the medical marijuana they need, and others. Responsible Ohio was forced to add an earmark to the bill they proposed. It would allow for people to grow their own at home, so long as they are not selling it. There were to be limits placed on quantities and other arbitrary rules that would keep the grow rights in the hands of only a few people. This illustrates the willingness of the state to shape arbitrary rules to suit those who pay the most.

I don’t think I am alone when I say that most, if not all, CopBlock writers are in favor of marijuana legalization. Be it for medical or recreational reasons. I also believe I could make the same assumption about the majority of people in this country. Last I checked, poll said it was like 76% of the country wants weed legal. So why isn’t it legal yet? We went to war with our government over tea, why are we not flipping out about this?

I feel that the state is just trying to make sure they still “get theirs” out of the deal. I believe this legalization effort as well as putting and end to the war on drugs as a whole, is being held up by people who supposedly represent us. I believe they have repressed reports and studies that say that marijuana has a medical value. I believe that they have lied about it for many years. Through all party lines and people who have served as both democrat and republican in the past, as well as those serving currently.

I believe the state and it’s representatives are all directly responsible for a genocide that has taken place right under our noses for the past 60 years minimum. Not only in the death toll of the failed drug war, but in the many people who died waiting for doctors to give them some relief. Lest we not forget that the entire medical profession is also accessories in the deaths of countless AIDS, cancer, and epileptic diseases such as MS, and Parkinson’s disease patients over the years. Recent studies have shown effective treatment of such diseases through use of medical marijuana. I say recent because the government has had the doctors so scared to do any real research, unless it was government funded and secret, of course!

The state had the chance to do the right thing and make the money of marijuana legalization. They chose to spend it on law enforcement, so to me they get nothing else from the legalization effort!  No taxes, no monopoly on the product, NOTHING! We have learned nothing from prohibition. We have learned nothing from the failed drug war, except that a drug war can not be won. We must treat weed like we treat tomatoes, and regulate it the same way!

I believe it is time to free the weed. I call on all potheads, casual users and medical users alike, researchers, gardeners, botanists, doctors, lawyers,  farmers, even LEO’s who hate the drug war. Plant it EVERYWHERE!!!

Make marijuana so part of the scenery of this continent, that there will be no stopping it then!  It’s time to free the weed for real!! Plant it everywhere. For every pot seed in the world there should be two plants growing! Start planting it in public parks, in front of police stations and firehouses, everywhere it will grow, plant it! That will put an end to these exercises in futility like this one in Beavercreek.