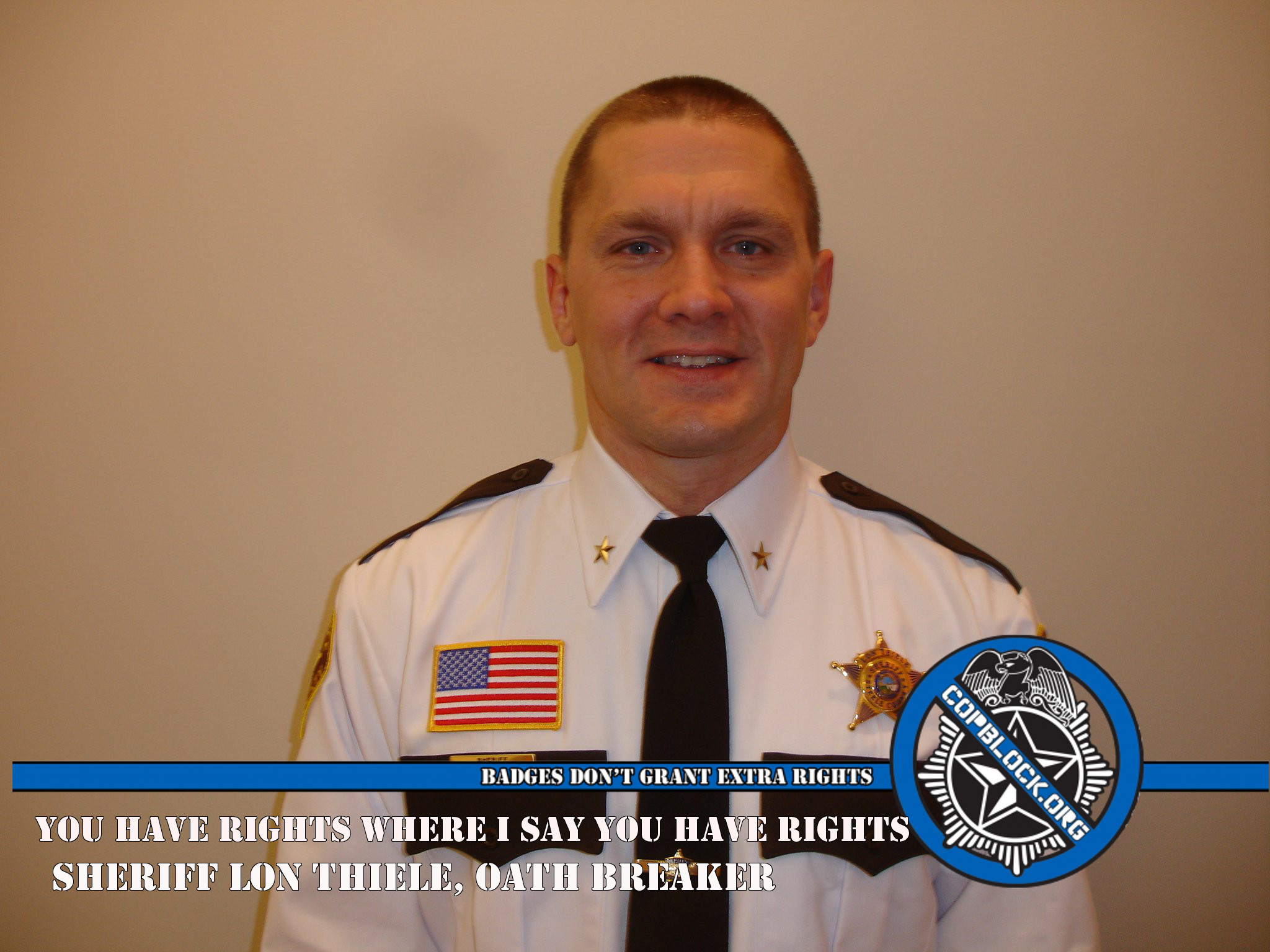 In a video uploaded to YouTube by Old Paths Baptist Church MN, Steele County Sheriff Lon Thiele, attempts to trample on a group of sidewalk preacher’s first amendment rights by trying to force them from public property to a “First Amendment Zone.”

According to the description in the video, they were preaching in downtown Owatonna, MN at the Steele County Fair when the Sheriff tried to remove them from the spot that they were in.  The sheriff short circuits about half way through the video and just keeps repeating himself every time the photographer asks a question.  At first it is kind of comical, but then after a while the robotic responses that the sheriff gives are down right disrespectful and anger inducing.

The video starts out with what appears to be a polite sheriff.  He’s not raising his voice or making any threats.  He starts out telling them that they have to move a block away from where they are.  The sheriff is asked why they have to move and the sheriff tells him that they are causing a problem where they are.  What it boils down to is either he doesn’t agree with their message or someone else didn’t agree and called the law on them.

Sheriff Thiele changes gears and begins demanding ID.  The photographer responds that he is not going to show ID and that he has done nothing wrong.  When the sheriff sees that he is not going to legally get this guy’s ID, he begins with a veiled threat by saying, “Do you want to keep this peaceful?”  He repeats it several times.  As you watch the video, you can see that these words are definitely a veiled threat.  The guy responds that he indeed does want to keep it peaceful and then asks the sheriff if he is being detained.  The sheriff never answers the question.

He asks the sheriff again what he has done wrong and the sheriff responds with, “You have no right to demonstrate here.  You have a right down there.  Okay?”

The guy that is talking to the sheriff is not being unreasonable with his questions.  He is remaining calm and wants to understand why the sheriff is behaving this way.  He continues asking questions and this is when the Thiele begins his childish behavior of just cutting the guy off and repeating over and over, “Let’s move it down there.  Let’s move it down there.”  Then he switches to, “We have a place for you to demonstrate down there.”  He says it over and over again.

Finally another officer steps in and actually speaks with the guy like a human being.  The officer begins to explain what they see is the issue.  He explains that the grass that some of the protesters are standing on is fair ground property.  The photographer immediately addresses that issue by instructing his group to step off of the grass.  The more personable officer then tries to justify the reason for them having to move is that they are creating a traffic hazard even though they are clearly on the sidewalk.  He then tells them that the city is coming there to explain to them.

Even though the second officer was much more personable, he was so clueless about the law and what theses people’s rights were.  I also would like to see how the city is going to explain things to them.  Is the city a person?

Feel free to contact Sheriff Thiele and voice your concern over his blatant abuse of these people’s rights.

Only two hours after posting and I have an update already.  The Sheriff’s office get extremely butt hurt over negative messages on their Facebook page.  I left a review and a couple comments on the page in reference to this Sheriff being an oath breaker and  was immediately banned and received this message from his admin.  Feel free to send her some love as well.