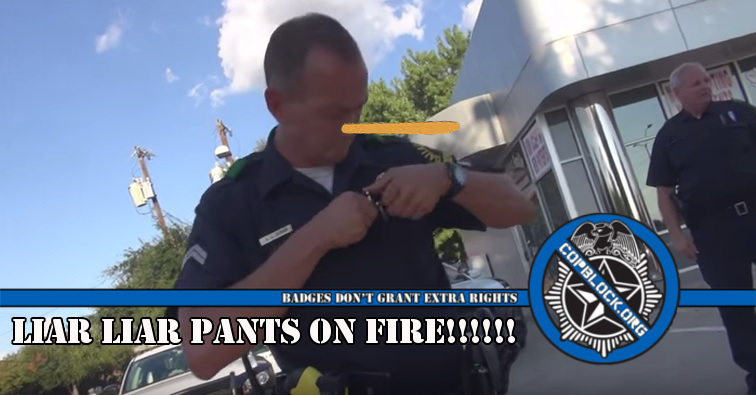 Note:  For more information on what led to this video, please view the video embedded at the bottom of the story.

The Battousai strikes again with another stellar video that shows how bad cops will lie to get you to identify yourself.

First, a little background on what led to the video above. Batt was conducting a First Amendment audit (recording public buildings) in Dallas, Texas at a police department from across the street on a public sidewalk.  He is quickly approached by several Dallas police officers trying to identify him and asking him what he is doing.  He refuses to identify, but calmly explains that he is working on a story about one of their officers.  The first officer on scene tells Batt that he is being detained for suspicious activity, meaning the filming of the police department.

A second officer arrives and tells him that they are just concerned because of all of the violence against cops lately.  While this officer is telling him this, the first officer begins taking pictures of Batt.  More officers arrive and they continue to ask him questions and trying to explain their behavior as just protecting themselves.  At one point in the video they take a picture of a vehicle – that is not his – and run the plates.  He is then told he is free to go.

Now for the reason for this story.  In the above video, Battousai had left the scene where he was filming the police department.  He enters a private business (no video shown of this) to inquire about enrolling someone in a class and to ask for a business card.  The video picks up with him sitting in his car and the officer from the first video taking pictures of his car and plates.

He gets out of the car and asks if he’s being detained again.  The officer says that he is being detained for suspicious activity.  Batt asks him what he did and the officer tells him that he just went into that business and created a disturbance.  Battousai denies that and challenges the officer on the validity of the excuse the officer just gave him.  He then tells the officer that he wants to face his accuser.

More officers roll up on the scene as the officer starts demanding ID.  Batt holds his ground and educates the officer on Texas Penal Code and again challenges the legality of the detainment.  An officer; the one that Batt is actually doing the story on, is sent into the business to question the lady inside.  The cop tells Batt that he will be in violation of the law if he doesn’t provide ID and gets shut down.

The officer comes out of the business and walks over to what I assume is the supervisor and they chat for a few minutes.  Then more of the cops move to the other side of the parking lot to discuss what their next move is.  Then in a surprising move by the original officer, he approaches Battousai and actually apologizes.  He flat-out admits to making up the whole story about Batt causing a disturbance in the business.  He then walks away and tells him it will just be a few more minutes while they check to see if he has any warrants.

The officer returns and then apologizes for lying about the law when he told him that he was legally required to provide ID.  Battousai then asks him how long he has been an officer in which he replies, “25 years.”  He calls the officer out on his ignorance of the law and being a 25 year veteran.  The cop then says, “I don’t walk on water.  I’m not perfect.  Are you?”  His reaction is a clear deflection of any fault for being the thug that he is.

Eventually they let him go and that is where the video ends.  I can’t say enough good things about this guy.  He stays cool under pressure even when surrounded by armed men hell-bent on doing him harm.  He never raises his voice and stands his ground regardless of what might happen to him.

Seeing the way that officers respond to him, it is obvious that he is doing something right.  The fear these officers have of transparency is laughable.  They use the same scripted excuses for their harassment of someone who is engaged in legal activity in a public place.  A big thumbs up to Battousai for continuing to keep these dirty cops on their toes and letting the world see to what lengths they will go to harass you.