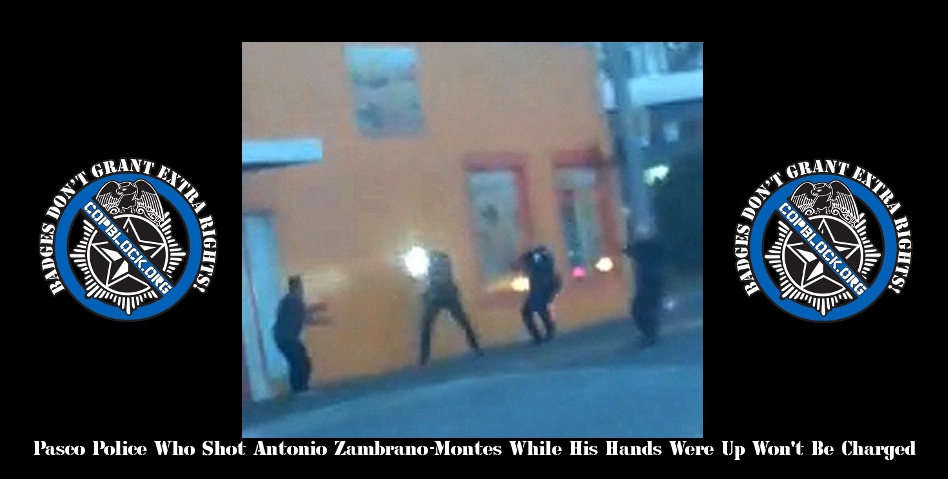 The prosecutor for Franklin County, Washington announced on September 9th that none of the three Pasco Police officers, who shot Antonio Zambrano-Montes as he was surrendering in February of this year, would be charged with a crime. Zambrano-Montes, a Mexican immigrant and farm worker, had initially been throwing rocks at cars and other people, reportedly including the police. He had tried to run away from the police before he was shot. The shooting led to weeks of protests in Pasco and on a lesser scale among Latino immigrants throughout the country.

The shooting was caught on video and pretty clearly showed Zambrano-Montes had stopped and raised his hands above his head when Officers Ryan Flanagan, Adam Wright, and Adrian Alaniz fired the shots that killed him. However, according to Prosecutor Shawn Sant, no criminal charges could be filed because it could not be proved that the officers acted with malice when they shot an unarmed man who no longer represented a threat to them in any way.

“Sant said the evidence showed the officers used legal force as they tried to arrest a man who had assaulted them. Sant said he could not meet the high bar for criminal prosecution, which would require a showing that the officers acted with malice.

“Law enforcement officers do not have the option of walking away to dial 911. They are 911,” Sant said.

Sant said there was probable cause that Zambrano-Montes posed a serious threat to others.

“I believe a jury would not find the evidence of malice and the absence of good faith beyond a reasonable doubt in this case. We legally cannot charge police officers with a crime for exercising their discretion for using force in good faith and without malice,” he said.

As Sant read his statement, people in the courtroom called out, protesting his decision.”

Officer Flanagan is no longer with the Pasco Police Department, having resigned to take some (undisclosed) job within the “local building industry” in June, although it was reported to be unrelated to the case. The other two officers have been on paid leave (AKA paid vacation) since Zambrano-Montes was killed.

Prior to the announcement by Prosecutor Sant, Gov. Jay Inslee sent a letter to the state attorney general requesting a review of the decision, regardless of whether the officers ended up being charged or not. In addition, the U.S. Attorney General’s Office is conducting it’s own investigation. There are also several lawsuits that have been or will soon be filed over the shooting.