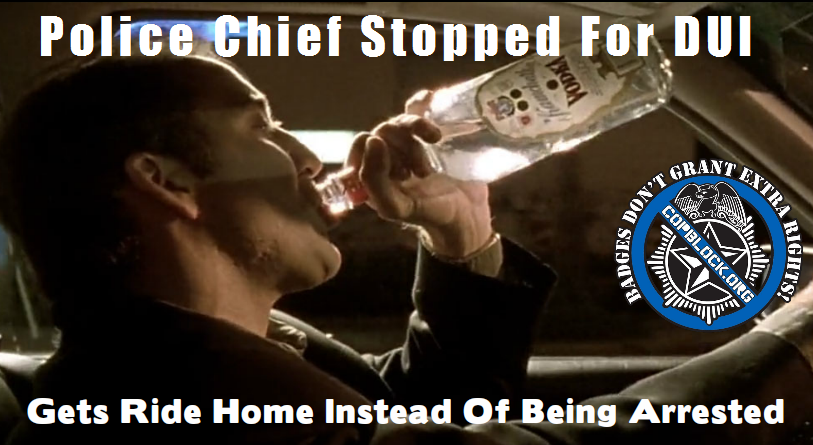 A few months ago, Joshua Scott Hotchkin posted a story about a police department that favored applicants who stated they would not arrest a fellow officer for a DUI.  Of course, the copsuckers came to the department’s defense, saying, “More bullshit from Hotchkin”,  “As usual you try to twist everything around”, and my personal favorite, “Membership has its privileges”.

Though it’s not my article, I do find some joy in pointing out when copsuckers fail miserably. Case-in-point: Belchertown’s Police Chief was pulled over on Superbowl Sunday for driving under the influence. A concerned citizen saw an unmarked police car swerving and driving erratically, and called 911. The Police Chief was never arrested, given a sobriety test, or even given a ticket. In fact, the responding officer gave the Police Chief a ride home.

According to the police report, when Granby Police Officer Jason Richard stopped the vehicle on suspicion of driving drunk, he quickly recognized that the suspect was Chief Francis Fox (from the neighboring town of Belchertown).  The report states Chief Fox’s eyes were extremely red, bloodshot and glossy, also a strong smell of alcohol emitted from his breath and he was slurring his words.  Officer Richard stated:

Chief Fox then asked me if I knew who he was and told me that he had been a cop for 30 years. I (Granby officer) explained that I knew exactly who he was and that I did not appreciate the situation he was putting me in.

You would think that Chief Fox would have been grateful for the incompetent officer’s actions, but he wasn’t. According to Officer Richard, the Chief said “he did not appreciate my attitude towards him, and he asked me who I thought I was to talk to him that way. ”

If you believe the Granby Police Chief, when he claims that Officer Richard “made a discretionary decision in a stressful situation that involved a high ranking police official from another department”, you would be naive at best, or a copsucker at worst.

Why? It was only a few years ago that Granby police arrested one of their own for sexual misconduct charges. Graby Police Officer Jose Sanchez was arrested, and subsequently convicted, of four felony charges of sexual exploitation of a child. Though Officer Sanchez faced decades in prison, he was given preferential sentencing because he was an officer, and only served 89 days in jail.