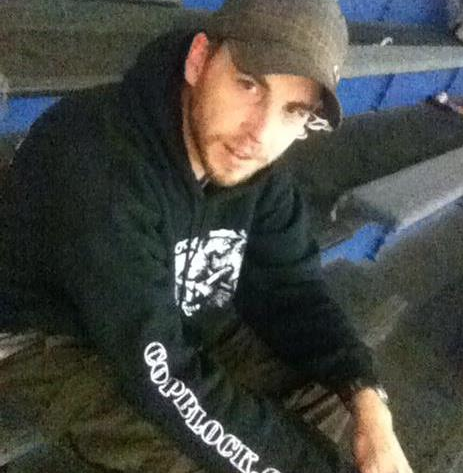 “Land of the Free” they say. Yet, not free enough to allow Dustin McCaskill to say, “Hey FBI, how about I kill one of your foot soldiers next time they try to raid me at gunpoint on a warrantless raid? How’s that sound?” Or “I’m threatening to kill a cop or FBI agent. They have put me in fear for my life with warrantless raids at gunpoint … Now, come arrest me you (expletive) cowards. I just made a threat. I’m going to be the pigs worst nightmare. Come get me.”

Those are two of the quotes released by the FBI that led to the arrest of Dustin, founder (and former admin) of Colorado CopBlock, and his currently pending 5 year prison sentence. In June, Dustin took a plea deal, agreeing to plead guilty to Interstate Communications with Intent to Extort. Now I’m not interested in explaining how CopBlock is a decentralized organization, the number of people who disassociated with him, or how he wasn’t a part of the official website or CopBlock Facebook page. If you care about that then you need to read the previous posts by co-founder Pete Eyre – see here – and current Editor of CopBlock.org, and founder of Nevada CopBlock, Kelly Patterson – see here.

What I’d like to talk about is how Dustin, as messed up as some of his tactics and ideologies were/are, is still better than a cop.

Every single day police are issuing tickets, summons and/or locking someone in a cage. Every single day there is an insane amount of military style raids conducted on people’s homes who have done as little as grow, sell or distribute a plant. In fact, every single action a police officer partakes in is backed by the barrel of a gun – it’s essentially a death threat.

We all know what happens if you don’t go to court, don’t pay the fine or resist your own arrest. If you don’t do these things the police will hunt you down in your home or wherever you can be found and bring you to jail or court. If you resist these actions at any time, in any fashion, the police will escalate their force against you. If you’re lucky that will simply mean tight handcuffs or some cuts and bruises. On some occasions, however, it may mean death.

If the police had a Facebook page that posted ACTUAL statuses of what they do, on any given day you would probably look something like this.

“Hey, John Smith at 301 Walnut St in Cleveland, OH. We’re coming to your house today because our confidential informant told us you’re selling pot. Now we’re going to be coming 10 deep with a variety of weapons at our disposal. You can either lock the dog in the bathroom, lay on the floor and allow us to do our jobs or we can shoot your dog, throw flashbags throughout your home and beat or kill you in the process. How’s that sound?”

Of course the police don’t ACTUALLY say that, but make no mistake, that’s what they mean. Same goes for any traffic stop. Sure the cop might have stopped you for speeding, but if you reach for your glove box too fast, drive off without warning, refuse to pay the fine or fail to show up at court, then an escalation of force will be visited upon you. Think of how this Facebook status would read:

“Hey, @John Smith, you failed to show up to court today so now all of us are looking for you. If you run and we catch up to you then we’ll probably swarm, taze, beat and – if need be – kill you to complete our task. So you can either walk down to the police station or we can come and take out a few of your friends in the process. It really makes no difference to us. How’s that sound?”

I’m sure some of you CopSuckers are probably saying that I’m way off and that this sounds entirely silly. And I kinda agree with you, expect for the silly part, because in reality it’s downright disgusting. The point here is that the police officers every ‘lawful’ requirement is backed by the ultimate use of force- death. Therefore anytime a police officer is asking you to do something they are saying, “If you don’t do what I say then I’ll kill you.”

This is a fact no matter how much you want to deny it.

Back to Dustin, who’s about to do (most likely) 5 years in prison for threatening to kill cops. Yet, as I just mentioned above, cops threaten to kill people everyday! While the police run around like a mafia Godfather, making you offers you (literally) can’t refuse, they are ironically willing to cage anyone who mocks their business model. Doesn’t anyone else see something wrong with the governments so-called justice system locking people up for the same thing they themselves do?

In addition to all of this madness, Dustin is clearly talking about self defense, something most people would agree anyone has the right to. Since the cops go around initiating force on others, Dustin was clearly upset by contemplating past and possible future acts of aggression by police against him. There is a big difference between initiation of force and self defense. So before you try to taint the idea that “badges don’t grant extra rights” or say that ALL CopBlockers advocate killing cops, make sure you are getting your facts straight. Dustin certainly had issues and could have benefited from outside influences, yet, he doesn’t deserve to be put in a cage – at our expense – for doing something that is:
a) supposed to be protected here (freedom of speech)
b) done daily by those who took him to a cage.
Which is why I say that Dustin McCaskill is still better than a cop.

[Note: I’ve received a number of threats from police officers and CopSuckers over the 6 years I’ve been active at this site. In fact my last 30 day Facebook ban was for posting the last one publicly. So while Cops and Copsuckers continue to threaten CopBlockers, none of them are being charged with Interstate Communications with the Intent to Extort (and I don’t want them to be either because freedom of speech).]