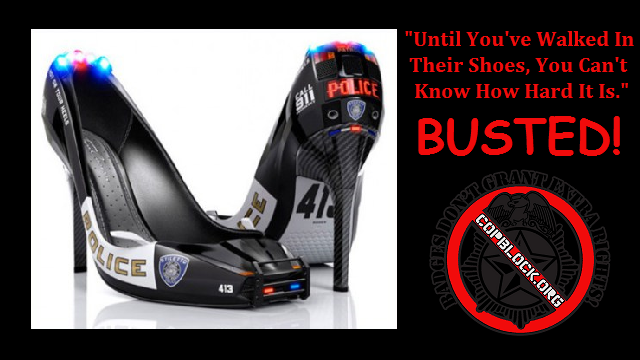 A few of the things that the legions of mindless police defenders we refer to as ‘Copsuckers’ always say to us are some version of one the following:

“Until you’ve walked in their shoes, you can’t know how hard it is to do the job police do.”

“Until you are in that situation, you do not know how you would react.”

“Instead of complaining about it, why don’t you become a police officer and do better?”

As for those first two, they are both true and meaninglessness. It is quite obvious that I cannot fully appreciate the experiences of another individual nor how they would affect my outlook and behavior. In fact, not even any two individual LEO’s could fully do that, as their experiences- before, outside of work and as separately operating conscious agencies being fed different streams of perception and interpreting them independently -would mean even they would all experience being an LEO differently. It is not possible to see into the deep experiential knowledge and memories of others in such a general way that the gap between mere careers would be far less than our intrinsic differences as individuals. So while somebody who has never worked as a police officer cannot know how that experience would effect them personally, it is an unimaginable stretch to use that reasoning to say that this gap is a meaningful barrier for understanding, since we must already overcome so many others to function as a society of individuals.

At the same time, while that gap between experiences may be a meaningful statement when it comes to merely understanding how a person thinks or acts, it is not a justification for acts our society agrees are immoral. Not being able to handle yourself properly when it seems likely that propeller is about to strike poo is not justifiable merely because your primal instincts overrode your critical thinking and compassion. When choices get tough you are expected to respond by making better decisions, at least, that is how it works in regular day to day life for most of us. The inability to maintain awareness and self control leading to final consequences for others is not justified by bad circumstances that you got your own self into. So if you are unable to handle certain predicaments without calm, rational consideration and a reasonable and humane response, you had no business signing up to become a cop. The difficulty is not an excuse. If it is true that a difficult position excuses bad choices, then none of us would ever be in violation of human values and laws, because all of us have been brought to the brink of every choice by the momentum of our history, experience and ideologies. No eight-year-old ever wants to be a serial rapist when they grow up. But through the circumstantial nature of sexual imprint conditioning, our sexual urges are not necessarily our choice. If internet porn is any indicator, there seem to be a lot of people with a serious sexual attraction for rape scenarios. It is likely that many of these potential predators resist their urges, most often by not putting themselves in situations where their weakness would overcome them. It is quite possibly the case that most people who have been imprinted with urges for violent sexual acts never commit them and are not proud or comfortable with that part of themselves.

Every single being that has ever lived did every thing that they ever did because they were in their own shoes. When the shoes get hard to walk in you either stop walking or take them off. Your sore feet are not a meaningful justification for the misery of others. Take care of your own business and stop complaining about your shoes.

Telling me to become a cop is like telling a vegetarian that they should become a hamburger. I am not complaining about cops because I think I could do better, I am complaining about them because I do not want cops, yet I am forced at the threat of death to live alongside them and pay their salaries. The vegetarian doesn’t think they taste better than meat, they just don’t want to eat meat. And they should not be forced to eat meat. Nobody should be forced to consume (or be consumed by) a product they have no desire or use for. If policing and the state it truly serves were such a great product, they would not need to force you to buy it. The inability to opt out of a service means that it is no longer a service, it is slavery.

Yet even if I did believe in the institutions of the state and policing, I should not have to do it myself to expect a quality product in return. There should be reasonable expectation that if such a service was going to magically be made an unquestionable, intrinsic part of reality, it should be held to very high standards. The standards for those who keep the standards must necessarily be of a very high nature, or the very standards the entire scheme is based upon will have become meaningless. And besides that, I do not want to be a cop. People should be encouraged to find their strengths and dreams and set their paths and goals accordingly, and being a cop has nothing to do with how I want to live my life. It would be a whole new kind of slavery if the most honest and incorruptible were sentenced to a life of policing just because we required police, but couldn’t take chances with volunteers. So there really is no good moral solution here that involves continuing these toxic institutions.

Yet there is a lot of opportunity for innovation and evolution. What we might build in the ashes of those obsolete systems is something so amazing that few people can even imagine it yet. Not because it is not already beginning, but because fear and envy and their instinctual patterns have ruled our species for so long that they are difficult chains to break. Though our path to a world beyond authoritarian absolutes was began long ago. What many of you poor deluded fools living with your feet in the waters of the past see as the destruction of your precious narrow reality is the birthing pangs of a far better one. Because you cannot see its shaping and forming alongside this dying husk of a world, you cannot know it, so you fear it. But the momentum of history is much greater than your primal primate politics and it will come whether you wish to accept it or not. Some of us have been kind enough to try to warn you, to ease the shock and transition. You ungrateful bastards.