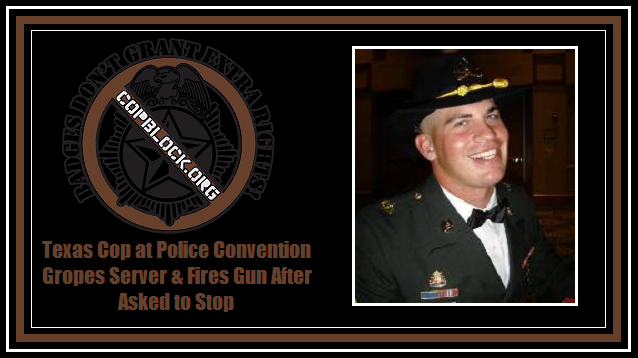 In a fit of rage that would make an infant victim of confectionery theft blush, a Texas police corporal was arrested on Thursday for firing his weapon at a wall after being scorned by a server with whom he had been making inappropriate sexual advances and physical contact.

The situation occurred at an El Paso Marriot during the Combined Law Enforcement Association of Texas [CLEAT] policing convention. The out-of-control officer was then disarmed and detained by other LEO attendees, who then reported and turned him over to the El Paso Police Department. That agency released the following statement shortly after the arrest was made:

“The off duty officer, identified as 28 year old Kenneth Lee Sheka, was engaged in a conversation with a female server near the hospitality area. Their conversation became inappropriate when Sheka began making comments of a sexual nature and ultimately touched the female inappropriately as she walked passed him. The female told him not to do that again and continued to walk away, escorted by another male, when Sheka pulled out a pistol and fired one round into a nearby wall.”

Sheka, a corporal in the Temple Police Department, was then charged with a single count of deadly conduct/discharge of a firearm, which is a third-degree felony. It has not yet been determined what disciplinary actions, if any, his department will take. Temple PD spokesman Christopher M. Wilcox ‘assures’ us that Sheka attended the convention at his own desire and expense and not as a representative of that department. He also stated:

Since the terms ‘professional’ and ‘courteous’ seem to have a different definition for police, Sheka should not expect any real negative consequences. The code of conduct generally seems to be ‘whatever we can get away with’, and is almost always overridden by fraternal codes and professional courtesies. Yet the problem lies not so much in what will happen, as it does in the fact that this kind of behavior is so strongly associated with the personality types who have an overwhelming presence in our policing institutions. And that which attracts the scum can never itself be an effective skimmer. Law enforcement is like a magic broom that creates more dirt as you sweep.