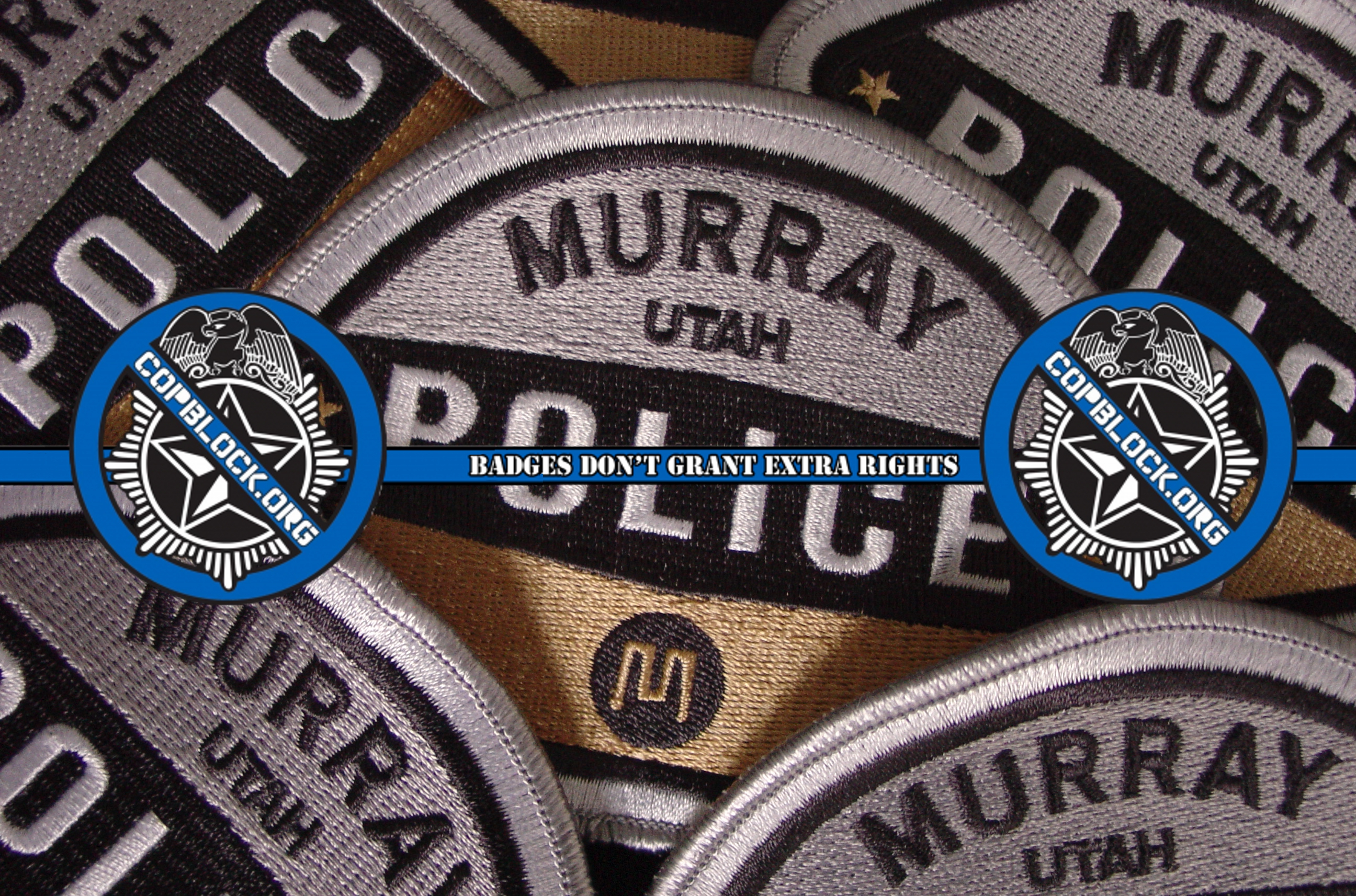 This post was submitted by Andrea Daynes, via the CopBlock.org submission page.

I have a TBI (traumatic brain injury) due to an auto-pedestrian accident and am disabled. I have permanent brain damage, as a result. Please excuse the grammar and I hope this isn’t too long.

Andrea describes, in pretty good grammar and a not overly long manner, how she was falsely arrested and abused for no good reason except that she didn’t bow down to the whims of a (very minor) government official and the armed bullies that they called after they didn’t get their way, even though they had no business demanding that she identify herself in the first place. 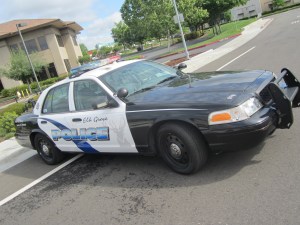 Additional Information: ”Dash cam doesn’t function &we have no record of when it ceased to function” – Lieutenant Tom Martin MPD

On the afternoon of August 6, 2015, I was visiting my grandchildren at my daughter Erika’s house, I noticed two ‘Animal Control’ (AC) vehicles pull up out front of her house. I told Erika about the vehicles out front and she walked out to meet the two men. I stayed inside with the kids watching while growing concerned about their tone of voice with her. She turned toward the house with a look of fear that she didn’t know what was going on, so I went to her door and opened it, while still remaining half-way in her house.

There were two Animal Control (AC) men. One was short, the other tall. The short one looked at me and said ‘And who are you?’ I replied ‘Who wants to know?’. Then he stated ‘Now I want to see your ID’. I walked over on my daughters front lawn closer to where they were and asked why they would request my ID?

They said they were investigating a report that had come into their office about Erika’s address and needed my name for their report. He asked my name again. I told him I was Erika’s mother. He then wanted my ID. I refused and told him I had done nothing wrong to warrant him to ask that. Then I asked why they were there.

The taller one stated he would not give why/what the ‘report’ they received was for but that it was concerning Erika’s puppies she had in her backyard. (They never checked/looked at the puppies the whole time they were there). The taller one wanted Erika’s ‘business license’ to sell puppies. I explained to them (as she did) that my other daughter had rescued them from the original owners who were going to drown them. She had paid for shelter, food, shots, water, etc. for these puppies until they were old enough to go to a home instead of them being killed.

The taller AC then asked Erika ‘how much money are you planning on making off the sale’? I went back inside and got my grandson’s phone to record this situation that was obviously getting out of control by these two ‘officers’. Erika stated her sister just wanted her money back off what she used to rescue them. The taller AC man then stated ‘well, what’s the dollar amount difference going to be’? Erika didn’t know that. The whole time the taller AC was wanting Erika’s ‘business license’ and $ amount, the shorter AC man was harassing me about my ID. I told him again I didn’t do anything wrong to warrant showing my ID, I didn’t even live there and had nothing to do with puppies. The shorter AC man then looked at the taller AC man and laughed ‘she thinks she knows the law’. ‘I replied, I actually know my constitutional rights and there is no probable cause for your harassment of me’.

Then the short AC man asked ‘Do you have a gun’? This was an absurd question because I had on a spaghetti strapped shirt with shorts from just taking my grandchildren swimming, I hadn’t changed yet. I replied ‘no, but if I am a member of the NRA and if I chose to carry it would be legal, but no I currently am not carrying a firearm anywhere in my swimsuit’. He then told me he was calling police for back-up.

I remained on my daughters front lawn as I listened to the taller AC man continue to harass her about a ‘business license’. The whole time I’m thinking ‘If that’s why they are here, it’s a civil matter’ but a business license isn’t required if someone is just attempting to save puppies. Not once were the puppies in her backyard checked on by AC, in fact they commented on what a great cage she had them in (the cage being visible from the front yard, just not the puppies).

The police pulled up. The shorter AC went across the street to speak with him. The taller AC still wanted a dollar amount from Erika regarding the puppies. It was very redundant. The AC and Murray Police (MP) walked back to Erika’s home. The MP officer asked if he could speak with me across the street, I complied.

While there he asked my name, I asked what grounds he had to inquire? He stated it was an investigation and I had to. Like I had told AC I didn’t live there, did nothing wrong, didn’t have anything to do with the puppies and that I was Erika’s mother. He insisted again that I tell him my name. I refused. He then put handcuffs on me. I thought I was being arrested, so I yelled to my daughter across the street ‘take care of my dog’ (who was at my home). The MP then yelled ‘shut-up’ and slammed me into his patrol car. I cringed because it hurt. He said, ‘get in the back’. I said ‘am I being arrested’? MP said ‘no, just detained’. He insisted on seat-belting me in and I commented to him ‘slam me against your patrol car, but make sure I’m seat belted in’? He then slammed the back door and I watched him walk back over to Erika’s house to talk with AC.

The temperature was 90 degrees that day. I was in the back of a patrol car, windows rolled up, in handcuffs, seat belted in, plastic divider separating front from the back. I began to overheat, huge drops of sweat coming from my head dripping down on me. I began to gasp for air, I couldn’t breathe. I started screaming for him to come back, he didn’t. I tried to open the back door with my toes in an attempt for air, unsuccessfully. I looked into the rear camera of the police car and said ‘I’m dying, help me’. I was terrified. I laid back in the seat and tried to calm myself and attempted to breathe.

I finally saw the MP coming my way. I screamed ‘help me I can’t breathe’, with a smile he opened the door and said ‘what’s your name’? In fear for my life, I told him my name and address. He was quiet as he looked up my information only to find there were no warrants. But I had got some air through his open door. After his ‘warrant search’ he then once more shut the door and walked across the street.

I began to overheat again and screamed ‘help me’. This was a most helpless, terrifying feeling. I tried to remain calm as not to pass out, I knew if I passed out, I could die and with this MP I didn’t think he would care. He came back finally. I stated he couldn’t do that in this heat. I was passing out, he opened the plastic divider two inches and stuck a hose (like you use to vacuum a vehicle) through to the back seat. I immediately put my face to it gasping for air.

He then started his patrol car, I asked ‘am I being arrested’? He said ‘yes’. I asked ‘what’s the charge’? He said ‘not giving me your name’. I told him that wasn’t a charge (when released from jail the charge was for ‘Obstruction of Justice’) I was never informed that. He told me he was going to read me my rights, I said ‘OK’. Whatever he was saying to me was not my rights. He attempted to remember, but didn’t and it was not my rights. I was exhausted and said ‘yes I understand’.

He then asked ‘what’s your other daughters name’? I said ‘how do you know I have another daughter? And if I did why would I tell you her name when after depriving me of air I gave you my name just to be taken to jail’? He asked her name again, I stated her name was ‘Jane’, he asked her last name, I stated ‘Doe’. He became upset and said ‘there goes your air again’ and took the hose and slammed the plastic divider shut. For the third time, I struggled for air.

I spent the next 9-10 hours in jail being treated less than humane only to pay $200 and be released at 12:30 am to walk back to where I was arrested for my vehicle and purse. The whole time worried about my dog if she had run out of water. All this because AC needed my ‘name for their report’?!?

I have bought/read both ‘discoveries’ from Murray police and West Jordan police, both filled with lies. I have highlighted all inconsistencies/lies. I am a citizen of the United States of America and I did NOTHING to deserve/fear/be tormented/terrified by both AC and MP.