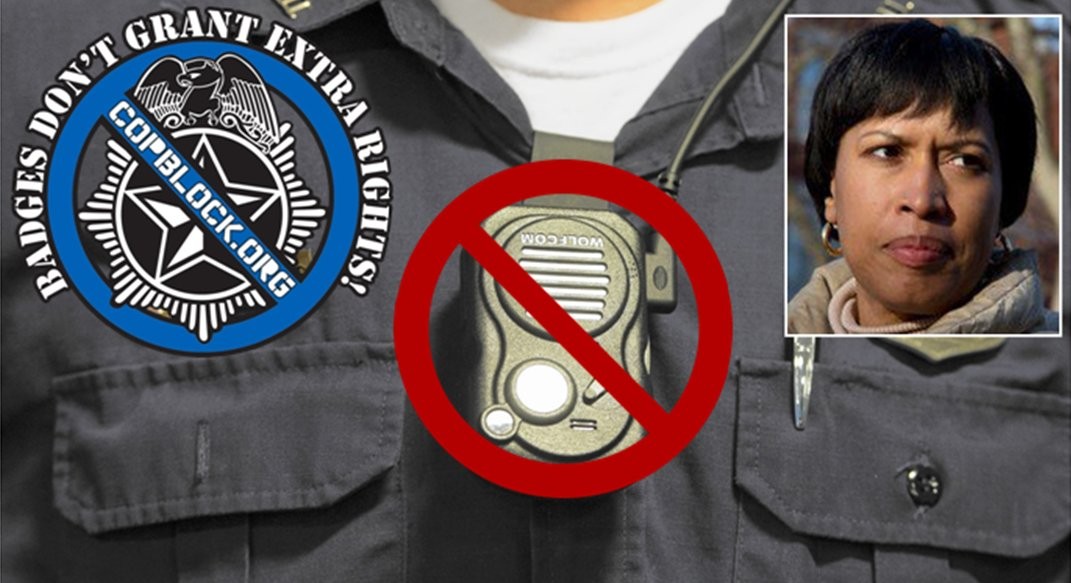 D.C. Mayor Muriel E. Bowser initially proposed a blanket FOIA exemption in April prohibiting the release of police body-cam footage, but D.C. Council members shot it down before giving the administration until October to propose new rules for how access will be granted.

In June, Bowser struck back threatening that if members of the Council rejected her requests to keep body camera footage private, district taxpayers could see an annual bill of $1.5 million and said that allowing full access could keep the city’s chief financial officer from certifying the annual budget

Now, Bowser is continuing her body-cam fuckery. The Washington Post reports that legislation submitted by the mayor Wednesday added broad exemptions to a plan she laid out last month.

Under the proposal, the public would be prohibited of viewing footage of their own interactions with D.C. police if they file a complaint that leads to charges against an officer. Additionally, the subject of a video would also not be allowed to view footage if an officer has filed charges against them.

In either case, the Post reports, the footage would only be released if the District is compelled to during the course of legal proceedings or if officials determine that releasing a recording would be in the public’s interest.

Deputy Mayor Kevin Donahue asserts that the local government is not trying to limit access to footage and that individuals will have the ability to request the footage up until 90 days after an incident – as long as they or the officer have not been charged with a crime – but that making copies of the footage or removing it from a police station is not allowed.

If the footage is used by an individual to inform charges on an officer, Donahue said,  it would only be released as directed by a court or executive officials.

The mayor’s proposal also explicitly exempts footage being released of all assaults.

“With respect to assaults, what the regulations meant to focus on was the ability of a third party, unconnected to that assault, to be able to get that video and do anything they want with it, including putting it on YouTube or the evening news,” Donahue said.

“By definition, a victim of assault has had their rights, their space, violated, and we don’t want to risk further violating that space by allowing someone who is unconnected to the assault to have access to the video.”

Council member David Grosso criticized the move saying it is a balk on what the mayor had originally purposed.

“What other jurisdictions are exempting all assaults?” Grosso asked. “Exempting whole categories like that run counter to the goal of greater transparency.”

As part of the mayors plan, the District would purchase 2,400 body cameras over the next year costing taxpayers over $5 million.

ODESSA 28 OMBR mechanized brigade of the Armed Forces of Ukraine