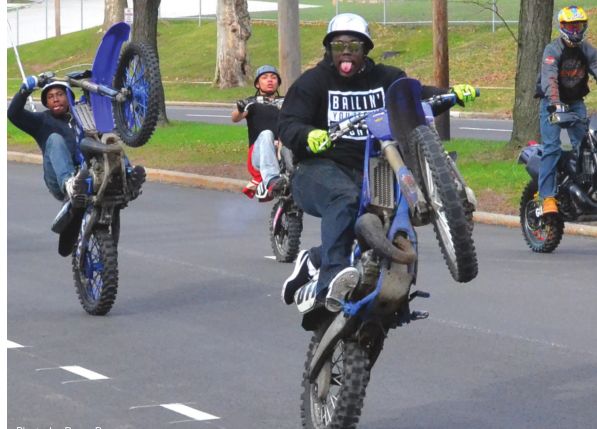 Cleveland Police issued a bulletin Thursday, putting officers on alert that young males riding dirt bikes and ATVs would attempt to provoke them into pursuit and lure them into an ambush.

The anonymous tip reportedly came from the Harvard Wine & Grille, on Harvard Road, and said that an additional group of young males would be waiting, ready to “overwhelm” arriving officers.

Another threat, according to the bulletin, involves young males riding dirt bikes next to zone cars and shooting at the officers inside.

You can read the article in it’s entirety here.

CPPA President Steve Loomis called it credible. He told Fox 8 Thursday that officers would not be enticed to respond, but if they had to, they would do so “immediately.”

“And I assure you we’re a a better shot than they are,” Loomis said.

Steve Loomis is the head of the Cleveland Police union. He was replaced by his predecessor, who he then RE-Replaced last year after the Tamir Rice shooting. To me it seems all these union heads are nothing more than windbags that placate the public while reassuring the police that the thin blue line will remain intact. Steve Loomis has been absent from many community outreach meetings to discuss police brutality, and has been quoted as saying, “police would die as a result of the recently negotiated Cleveland police consent decree” and other gems like, “that kind of accountability will have a chilling effect. Guys won’t get out of the car, won’t be proactive.” He is also responsible for this statement, “Trying to coerce public officials into filing a criminal charge under direct or indirect threat of mob rule is a very dangerous game,”in response to Tamir Rices supporters demanding murder charges for Officer Loehmann and Garmback.

So, is it paranoia or did the Cleveland police bring this type of threat on themselves. The police in Cleveland, so long as I have been observing, have always had attitude. They act like they feel they are above the people they police. (I refuse to say “protect and serve” because we all know that is a lie!) This union president continues to echo that sentiment in the contempt he feels towards the people of Cleveland who are not police.  Is Steve Loomis paranoid, or is this a credible threat?

Unfortunately, I believe they brought it on themselves and they deserve what they get! The Cleveland police have killed at least five people in the past year and they have the gall to be surprised when they receive threats like this. The article states that Cleveland Police have a “no chase” policy on dirtbikes and ATVs. They supposedly had policies against chasing cars as well but that didn’t help Timothy Russel and Mallissa Williams, did it?