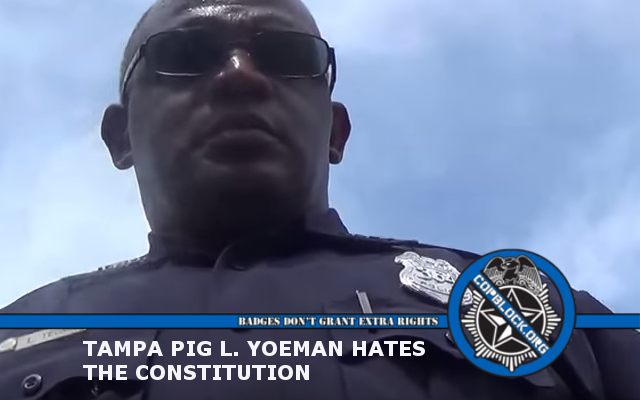 This video was uploaded to the YouTube channel Are You Fed Up Yet and clearly demonstrates how much officers in the Tampa PD like to piss all over the constitution.  The video is quite long, but worth watching in its entirety.  Officer L. Yoeman #364 is hot-headed from the get go and came across like he was just itching to kill someone in this video.  Below is what the poster of the video had to say about the events that play out in the video:

On August 26th, 2015 at approximately 3:00 pm I was at the Gadsden Park located in the City of Tampa. The park runs along MacDill AFB separated by a barbed wire fence and signs saying not to trespass. As I walked along the public path, I video recorded the areas of the base that is visible to the public eye. At one point during my walk, a base security specialist pulled up and called me over to the fence. I did not acknowledge him and continued on my way along the section of path that is lined with trees and shrubs. At the end of the walkway there is a gate that had security. They called me over, but I did not want to step on any area that would be considered base property. I retraced my steps and made my way back to the entrance and was making my way to another path that I believe led to the main gate.

Two Tampa PD officers arrived at approximately 4:00 pm and asked me what I was doing filming a military base. I told them that I don’t answer questions and asked if I was free to go or if I was being detained. Officer Uno #893 did not answer me, but Officer L. Yoeman #364 said that I was being detained for filming a military installation and that it was against the law. I did not provide my ID, but I did provide my Legal Shield card. Words got heated between the officers and me. I do apologize for what I said and for taking the exchange to a personal level. As Ron White said “I had the right to remain silent… I just didn’t have the ability.” I was held there against my will until the base investigators arrived. Again, I told them that I do not answer questions with which they respected my rights. I asked if I were free to go and they released me from detainment…

Police in Florida have a long history of violating people’s rights and being heavy-handed.  Just recently we shared the story,  of the officer that accosted a disabled veteran for parking in a handicapped parking spot even though he had the placard showing that he was allowed to. (Cop Assaults Disabled Veteran)  These stories also go back years, like this one of the Miami Dade officer threatening, “I’m going to throw your head to the ground and beat the fuck out of you.”

Police continue to cry that there is war being waged against cops across the country, but they can’t see that the distrust, disrespect, and contempt towards them is a product of their own doing.  The solution is quite simple, change your actions if you want to change your image.  When you treat citizens like this and think it’s okay, you’re going to lose support from the public more and more.

Feel free to contact Tampa PD and let them know how you feel about the unprofessional actions of Officer Yoeman displayed in the video.  Let them know that the actions of Officer Yoeman do nothing to gain community support of a department that tramples on the rights of its citizens.  The department webpage has links for anonymous community input survey and a citizens review board.

Maybe you out of control cops should visit our Welcome Leos section of the site.