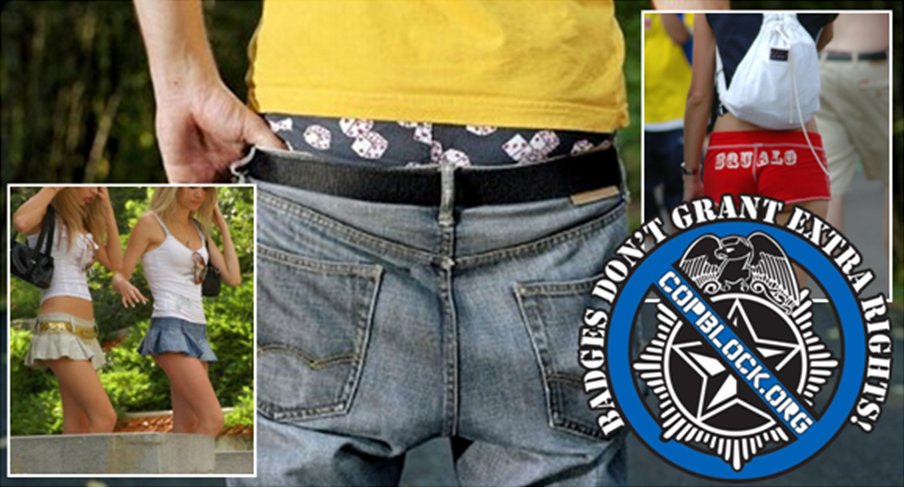 “It is about respect,” Goodman said at the time. “Who is going to respect you if you don’t respect yourself. The reason I brought this up is I think people deserve respect when they are in public. I think slacking is disrespectful. I think it gives our younger generation the wrong impression of what is cool.”

Its important to point out that many so called “conservatives” who fancy themselves supporters of limited government are often the first to advocate for the use of coercive intervention into peoples personal lives with things like bans and prohibitions.

In the interest of disclosure and for the purpose of not being pegged a leftist tool that just wants to rail against the christian right, I must say that I consider myself to be of the “rightist” mindset – that is to say anti-egalitarian.

As an advocate of a private law society, I see nothing wrong with communities voluntarily coming together on a contractual basis to provide for standards and rules they wish residents to abide by.

Implementing these rules via the mechanism of government however is problematic. Especially when you think you are a vessel of God and are here on earth to implement his will by forcing your preferences onto other people like Goodman does.

“We have people walking down the street with their hand in front of them holding up their pants,” Goodman said. “Then they have the nerve to walk into a place of business and ask for a job. If you come to my house you are going to pull them up before you get on my property, much less in my door. I prayed about this. I know that God would not go around with pants down.”

Yes that is an actual quote. Interestingly, Goodman seems to comprehend private property rights and acknowledges that he can justly restrict access to property which he owns, but he fails to understand the most fundamental property right of all – self ownership.

Just to be clear, there probably doesn’t exist anyone on the planet who despises sagging more than I. But is it really a defensible moral position to advocate pointing the guns of government at someone and extorting money from them for doing it? Of-course not.

Unfortunately for residents of the city of Dadeville however, the proposal for banning saggy pants last month was just the beginning. Earlier this week, Councilwoman Stephanie Kelley said its not only men who should be singled out for their choice of dress, woman should too.

“My concern is it should be for everybody,” Kelley said during a council meeting on Tuesday. “I think for the girls, with these shorts up so high looking like under garments and dresses so short, I don’t want us to be showing favoritism.”

That’s right, not only are local politicians considering banning sagging, they are now going after miniskirts and short shorts as well in a move that will assuredly turn cops into the fashion police. Now that’s social justice. Men shouldn’t have all the fun being accosted by local law enforcers, right? How inclusive!

Clothing bans are not uncommon in the U.S., especially in the south. Cities in Albany, Hampton, and Hahira, Georgia; Ocala, Florida and the Jefferson Davis Parish in Louisiana all have similar ordinances where fines vary from between $25 and $500.

Call me old fashion but in my opinion, if individuals are showing nudity, there are probably decency issues to consider – but within the statist paradigm, sagging and wearing revealing clothing should obviously not be criminalized as a means in and of itself.

Following such bans to their logical conclusion means plumbers are in for a rude awakening. That may sound absurd but such is the nature of government. If passed the ordinances will just be another mechanism of legalized plunder for local politicians and police enforcers.

Dadeville attorneys responsible for drafting the full proposal say it will be ready to be put to a vote by the next City Council meeting.