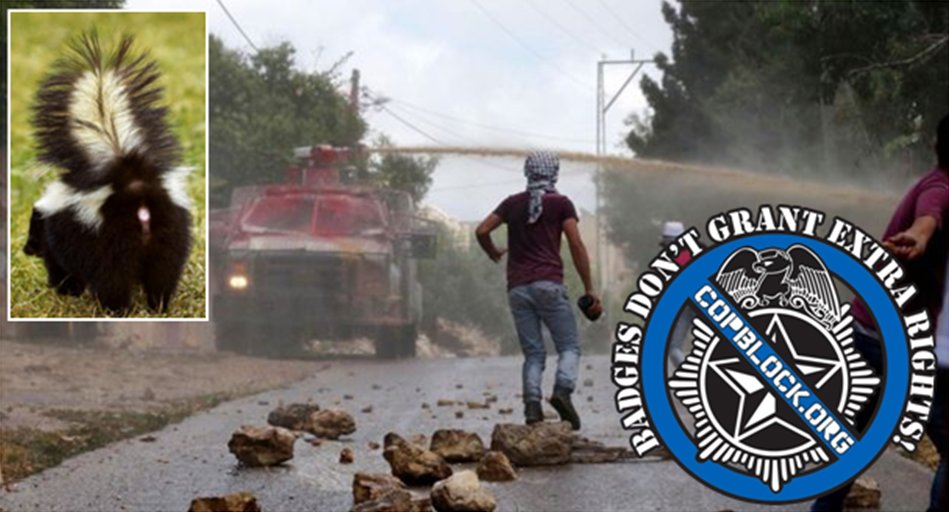 Used for crowd control by the Israel Defense Forces, the controversial non-lethal weapon called “skunk” or “skunk water” has been described by Palestinian protesters as “worse than raw sewage” and “like a mixture of excrement, noxious gas and a decomposing donkey.”

Derived from an organic and non-toxic blend of baking powder, yeast, and other ingredients, “skunk” is dispersed as a form of yellow mist that is fired from water cannons.

One BBC reporter described the spray as the “worst, most foul thing you have ever smelled. An overpowering mix of rotting meat, old socks that haven’t been washed for weeks – topped off with the pungent waft of an open sewer… [that you are] not able to get rid of for at least three days, no matter how often you try to scrub yourself clean.”

So naturally, “skunk” is just what police in the United States have been waiting for and the BBC reported on Saturday that several departments are already stockpiling the liquid.

Of the departments involved include the St. Louis Metropolitan Police Department, who saw riots and unrest following the shooting death of unarmed teenager Michael Brown who reportedly charged at an officer after a petty theft at a convenience store last August.

According to a November purchase order obtained through Missouri’s open records law, SLMPD purchased fourteen 1.4 liter canisters of “skunk” for $428 along with two types of portable delivery canisters that are similar to fire extinguishers.

The Maryland-based Mistral Security firm, which supplies “skunk” in the U.S. in canisters, grenades and large tanks that can spray up to 60 feet, recommends the liquid for use at “border crossings, correctional facilities, demonstrations and sit-ins.”

Some American commentators have warned that the use of the fecal-smelling substance would only exasperate anger against police, and deepen racial and social divides – and groups like Amnesty International, and the Association for Civil Rights in Israel have been critical of the the product.

Among Palestinians, the liquid is known simply as “shit.”

It is important to note that if officers are accidentally sprayed with “skunk,” they can neutralize the smell with a soap manufactured especially for them that the general public does not yet have access to.

A second invoice obtained from the SLMPD shows that the department modified its original order in January to denote a revised “emergency purchase,” that increased its order of the special soap decontaminate from one to four gallons.

Individuals sprayed with “skunk” have said utilizing a tomato-based Ketchup or soup has had some affect in rendering the smell fainter.