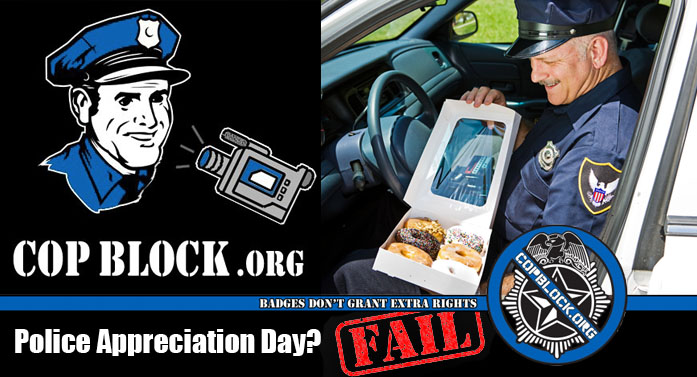 Over the past weekend, across the nation, boot lickers were all geared up to throw parties for their beloved heroes. “How do we honor the greatest people since the founding fathers?” As their eyes teared up and their hearts pounded, all these badge shiners could think is “We just love them so much!! We have to show them all how much we care!” With their heads firmly planted between ass cheeks and their lips ever so gently puckered up to the rectum of their saviors, they began the preparation for the greatest day ever!

Something went wrong though! To the horror of the rare and elusive copsucker, no one seemed to care this year? NO ONE….THE HORROR!

The banquet halls remained empty across the country. The food untouched. The asses un-kissed. How could this have happened? Perhaps it’s because despite the media campaigns, the hug a cop days, and the news of the “war on cops”, America is not as dumb as the police unions and cop apologists were expecting.

It gives me hope. Could this actually mean that it’s not just the “criminal copblockers” that hate what’s happening across the country? Could the police have gone so far, for so long, that even the Fox News loving conservatives have hit a point of WTF while watching the terrorist police in action in this country? Have we finally hit a point of critical mass of stories that people no longer believe the lie that police protect and serve us? Has the copsucker finally stopped riding the cop D?

Well we can’t expect it all can we? The copsucker will still walk around the town smelling beloved cop farts and swearing they smell good—just like a 12 year old girl screaming for the newest boy band’s next hit song. The bootlicker will always be waiting at the scene of a brutal assault making sure “officer beat um down” didn’t hurt his hand too much on a victim’s face. What can we expect though? The good news is we are effective here. All of you that share these stories and use your minds to ask questions have made a difference. We have become the majority.

The police walking into the parties thrown for them and ONLY seeing their wives and close friends must have stung! Having the mainstream media not even cover these events as news, stung even more. I imagine a child’s birthday party where none of their friends show up. Mom saying “But I think your cool” just makes the sting that much worse.

One such event took place in Allentown, PA. One of the most brutal and unaccountable departments I have ever encountered, truly felt the sting of “mom thinks your cool” when quite literally, the only people to show were their wives.
I hate to be mean, but in this case, I cheer! These guys have abused and ignored their communities for so long, that even the average copsucker has lost interest in them. Keep this trend going! Share this article to your respective police Facebook pages. I’ll be sharing with Allentown PD myself. Let them all know that we are never going to let their brutality go unanswered for.