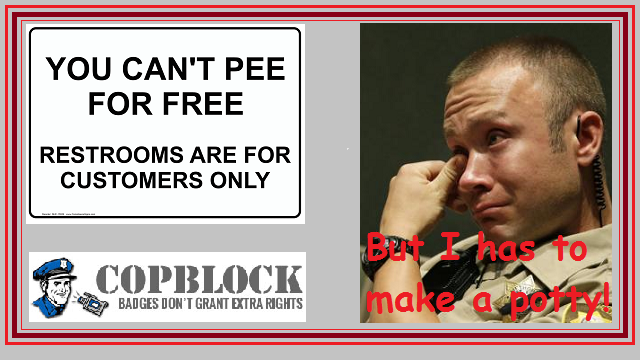 A Philadelphia police officer was the victim of aggravated butthurt and suffered third degree sand in his vagina when a rule-abiding barista who was just doing her job informed him of the businesses official (and legal) restroom policy. After he was subjected to this enforcement of compulsory rules he got angry and went and threw a fit about it on the internet. Now he has asked every other Ultimate Authority Cosplay Agent to recognize their mutual costume and band together against this nefarious agency which enforced rules that he did not like, and it is unlikely that the angry mob he leads will back down until the young coffee slinger is out of a job.

Before I get down with more of the funk, here is his post.

Officer Joe Leighthardt shared the unnamed officer’s post on Starbuck’s official Facebook page, Friday. It has since been shared over 11,000 times.

“Our officers are out there walking the beat,” said John McNesby Fraternal Order of Police President. “They’re out there driving a car, it’s common courtesy to let them use the restroom if needed I mean we’ve never heard of such a thing.”

McNesby says he is firing off a letter to Starbucks management. He wants either a change in policy, or a flat out repudiation of what happened.

The corporate office for Starbucks sent a statement to Fox 29 saying: “We want everyone who visits our stores to enjoy their visit, and we were concerned to learn about this experience. This customer’s experience is not consistent with the welcoming and friendly environment we serve to create for everyone.”

Starbucks is a private business. The resources it expends on its services, products and other resources depends on the customers who frequent it. To assume that any of the businesses offerings are up for grabs just because you wear a special uniform is a ridiculously ludicrous and childish response to the realities of the world. It costs money to maintain a public restroom. From paper products, water costs, cleaning and sanitary solvents and devices, to the labor needed to keep the bathrooms up to the standards of paying customers, these things add up. There should be no assumption that your badge earns you the right to use a businesses resources, especially when your wages are funded by the tax dollars they are already sinking into you whether they want or require your services or not.

Many metropolitan businesses have similar restroom policies for very good reasons. If their business was targeted as a public restroom the availability and quality of that service may not be up to customer standards. Food and beverage businesses are known to be judged heavily by their customers for how accessible and clean their restrooms are. Allowing non-customers to use the restrooms directly effects their business, so it makes sense for them to remain off limits to those not making a purchase.

In the world of policing, the law is the law, and is supposed to be the same for everyone, right? So if Starbucks says no to the heroin addicts, serial masturbators, soccer moms and other undesirables that might other wise overrun their restrooms, they should apply the rule equally to everyone else, right? Isn’t that what we are told about how things are supposed to work? Isn’t that the delusion people uphold which allows the entire rotten system to drag us nostrils first into its effervescing pit of eternal stink? So if enforcing the rules the same for everyone is okay for cops, why not for Starbucks employees, too?

Police will arrest you for a law they will admit is kinda dumb, but then stand behind it because, it is the law. Yet when one of us, who is just doing their job enforcing the policies they were trained in, does the exact same thing, the police get hungry for some blood.

Recently there have been many scraps between employees of various service industries and police, almost always resulting in the employee losing their job. In this case, as in those others, the backlash will also likely lead to police supporters boycotting the company, or depending on how it is handled, police critics boycotting it. How many businesses will be destroyed merely because cops take to the internet and try to pretend their customer service issues are so important that everyone else is supposed to react to them? Have you ever seen someone at a restaurant who thought that the entire customer base was supposed to join them when their entitlement and juvenile loss of self control became a public tirade? This is what cops are starting to do on a major level. And somehow nobody is calling them out on it.

Not only do cops think they should be above the law, but all of the rest of the worlds rules, as well. And when every individual or business does acquiesce to their whims and desires, they use their power and reputation to try to destroy it.

Is it any wonder that the employees of service industries have such negative feelings towards cops? Service industry employees make up the poorest class of working Americans, a class which is demonstrably targeted for police harassment, abuse and brutality more than any other. Poorer people are more likely to become targets of the enforcement of victimless crimes, such as the ill-fated War on Drugs. The people who work at Jimmy Johns, Arby’s and Starbucks are statistically part of a group that experience the worst effects of our justice system, so why should it be any surprise anybody that these people use the little power they have to tell cops to fuck off? And why do we expect these people to be fired for doing so? We would not expect a cop to be fired for a trespass as minor as this against any citizen. Cops and their unions often complain that police departments should unequivocally stand behind every police action, but we do not give service industry employees the same expectation that their employers should stand behind them?

The world of police and their supporters is full of double standards. Police think they are deserving of some sort of religious awe that ordains upon them special powers, privileges and status. They try to tell us that they are just people like you and I while expecting to be exempt from the same laws, rules and shitty life circumstances the rest of us deal with. It is obvious that they do not believe they are just like us. They fancy themselves the priests of the new social order, upholding the mighty word, while being above it in the name and service of the agency of their power- the state.

I am sickened by how police continue to try to use their powers. The cop here claims that they young woman is a liberal, yet how he knows this it is not possible to say. Likely he came to the conclusion after he profiled her from vague surface features, as police are wont to do. Or he is just playing off of stereotypes about coffee shops in general being havens for politically liberal types. This being the case, it seems he doesn’t even like Starbucks, yet feels entitled to its services regardless. The trait of entitlement is often associated with liberaldom in mainstream political media circles. I guess it gets a bit difficult when you are part of a giant socialized industry with a culture of entitlement and self-righteousness to realize you might be worse than those you hate at committing the same offenses. Yet there it is, the police state is the ultimate form of big government.

I guess its true what they say, we always hate most in others what we hate the most about ourselves.