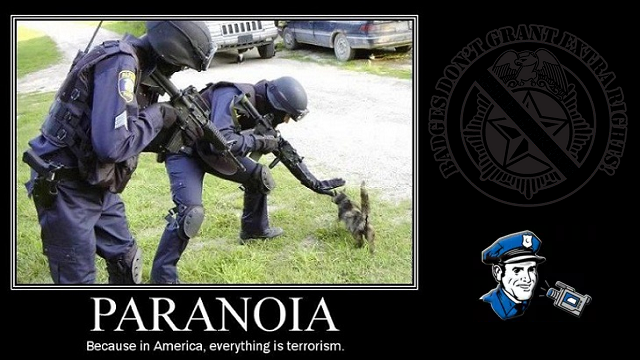 As LEO’s nationwide are being driven into a frenzy by false media reports of a non-existent War on Cops, police are becoming increasingly erratic and a nuisance to public safety.

On Sunday morning a New Jersey police officer fired on a vehicle that he claimed was ‘coming right at him’. Fortunately, his bullet failed to strike the driver, and nobody was hurt. Nobody was hurt. The vehicle that was ‘coming right at me’ did not in fact strike the officer. So was the driver a worse aim with a giant car than the cop was with a tiny bullet, or was this a case of paranoia that led to an officer freaking out and shooting at an innocent person who then fled the scene in fear, after having been shot at by a maniac? It is not possible to say, but several other recent incidents also show how the media and police are creating a climate which is producing extreme, unnecessary paranoia? A Millis, Massachusetts officer recently wrecked his own vehicle and then fired into it in order to concoct a story that would shift the blame from his malfeasance to the ‘War on Cops’. Initial reports in the media and police support circles claimed the incident was the product of a anti-police activism. Yet the truth later revealed a lying cop and the bloodthirsty paranoia of cops willing to believe such Bogeymen stories at the drop of a hat.

Police and their supporters recently got up in arms about an officer shot in killed in Fox Lake, Illinois, claiming it was part of this war on cops business. However later reports suggest it is possible the fallen officer may have killed himself. New reports indicate a former Chicago police officer has threatened Fox Lake officials, insisting they rule his death a suicide. So now we must wonder, was the cop shot by a random person, himself, or was it a former cop who killed him? Either way, the original story helped to create momentum for the myth of a war on cops, while details are bearing out otherwise.

When a group of people are told that there is a war against them, they rarely check the facts before ramping up their ‘defenses’. Police are being fed a false narrative about increasing dangers that is not borne out by facts. Yet it is likely that the climate of fear being created by this narrative is driving officers into paranoid fear that will eventually manifest in more tragedies, as their instincts and emotions take over for rational response.

The War on Cops is indeed a very dangerous thing. But not because cops are in more danger, that is provably untrue, yet merely because they are falling prey to a myth that is increasing their paranoid tendencies. The more culturally embedded this lie becomes, the more they are likely to lash out. Cops and media who play into it are instigating more death and destructive behavior. Paranoia is not only irrational, it is also unresponsive to rationalism. It is unlikely that pointing out the lies will will eradicate the danger they create. Only when the fearmongering ends will this new threat recede. Yet for that to happen it would require mainstream media and pro-police pundits to take a stance which which will kill their ratings. Don’t expect anything to get better until the predominate narrative stops rewarding these lies, which is unlikely to happen anytime soon unless you, the people, stop feeding the trolls who themselves feed police paranoia, and start questioning every scary wolf story you are told by the wolves.