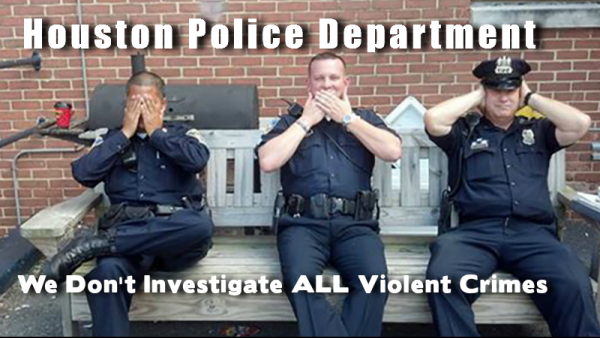 More than a decade ago, the Supreme Court ruled that police have no obligation to ‘protect’ the public. The landmark case dealt with a woman and her estranged husband. The husband kidnapped their children and the woman called police to report the crime. The police never investigated and the man later killed all three kids. (Town of Castle Rock v. Gonzales)

A city-commission study found that HPD failed to investigate over 20,000 crimes in 2013 – crimes with ‘workable’ leads. When questioned about the potentially damning figures, Chief McClelland said that the Houston Police Department does not and should not have a goal of aggressively probing every crime reported to it.

Most of the crimes that HPD were too lazy to investigate, dealt with burglaries. However, over 6,000 of those cases were assaults, hit-and-runs, and other violent crimes. Chief McClelland had a response for these numbers as well – “They’re very minor crimes. I don’t want to dismiss that if someone was a victim of crime, but they are.”

Personally, I don’t see how someone violently assaulting you, your spouse, or even your children are ‘minor crimes’. I would care to guess that if a member of Chief McClelland’s family was robbed, assaulted, or was the victim of a hit-and-run, he would have every officer within a 100 miles investigating the crime. I think what the chief meant to say, was that ‘some people aren’t important enough, rich enough, or (dare I say) white enough, for my officers to help’.

If the police don’t have to protect (or serve) us then what are we paying them for? To harass us for petty motor vehicle violations (Samuel Dubose was murdered for this), raid our homes for ‘illegal’ property (Jason Westcott was killed during a raid) or to scare us into compliance for those they do serve? I guess it could be a mixture of all of those things, yet, none of it is good for us (or the LEO).

For numerous other stories about HPD’s blatant disregard for citizens and their rights, please click here.