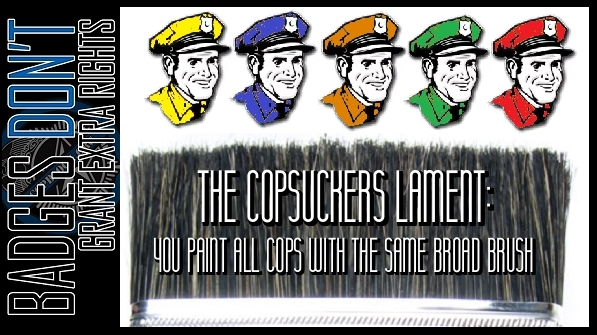 This is one of those comments that we get all of the time. It goes along with the Good/Bad Cops argument and the Bad Apples argument. The insinuation is that every individual officer has their own intentions, motivations and history, so they should not be judged as a single group.

While that may be the case, so far as judging the personal character of single officers, it does not hold true when you examine the profession itself. I could make a number of arguments about how inclusion in an institution or system makes all officers complicit in the actions of that institution/system. I could also make an argument that so long as there are bad cops getting away with breaking the law, there can be no good cops, as illustrated by the continued existence of bad cops. Yet my focus here will not be in showing that there is no difference between ‘good’ and ‘bad’ cops, but that only bad cops exist.

This is a really easy to do, actually. There are bad laws. That is it. It is that easy. If the laws are unjust, then those who enforce them must also be judged by that simple fact. Whether it is prohibition or any other victimless crime, we have bad laws. If you don’t believe that you should consider that the number of existing laws is so high, nobody is able to definitively give an exact number of exactly how many laws exist. What is known is that the average person breaks at least 3 of these laws a day. It is quite literally impossible to function in our society without breaking the law. So how could somebody whose only purpose is to enforce these laws, laws that criminalize every single living human being, be ‘good’?

The standard rebuttal for that is that this is the fault of politicians who make the laws. While they are certainly guilty as hell for their part in it, that does not excuse cops from their own inclusion in this system. The amount or type of blame does not matter so much as the fact that laws do not enforce themselves. Politicians and their laws would be laughed into oblivion if there were not also those who chose to enforce those laws. Every officer made a choice to enforce the laws. None were conscripted. They knew the laws were bad and they decided to enforce them anyway.

So when you are telling us that we are painting all officers with a single wide brush, that is absolutely true. And the brush we are painting them with is called ‘the law’. Regardless of their intentions, motivation or history all individual officers are united under this one single cause. The Supreme Court has ruled that it is not the duty of the police to serve and protect, only to enforce the law. Regardless of what individual departments call them, they all have quotas of some sort, meaning that those not enforcing enough laws will not long be police officers. So if you say that my brush is wide for painting all of the individual men and women who knowingly volunteer to enforce bad laws, you are right. Yet it is the correct brush to use in this case.

Now the only exception to my logic that I can think of is that an officer may not know that the laws they are enforcing are bad. However that makes them either psychologically or intellectually defective, so ‘sociopathic imbecile’ is probably not much better than the label ‘bad cop’. Unless, I guess, the person defending them is empathetic by way of being a sociopathic imbecile their own self.