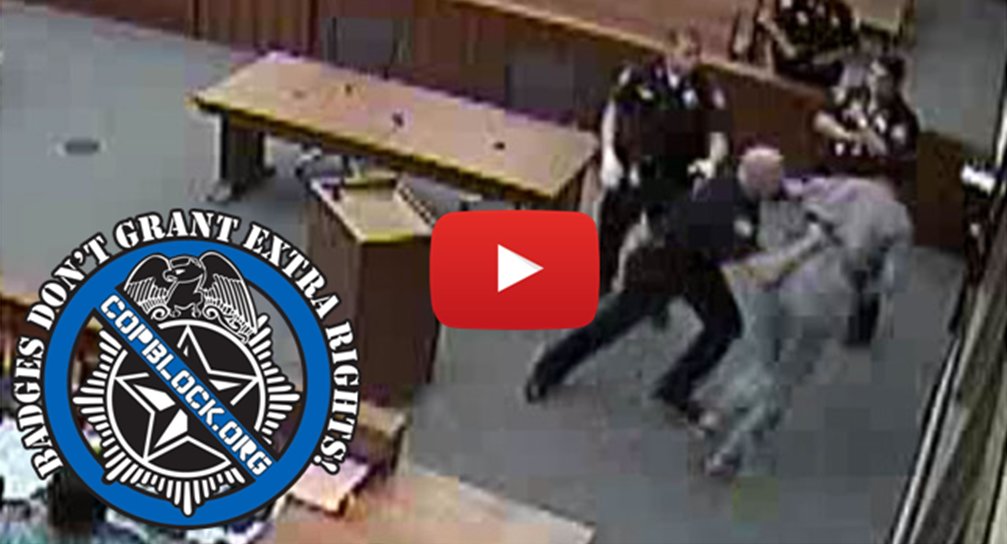 A Denver deputy filmed violently attacking a shackled and handcuffed inmate without provocation has escaped justice after District Court Chief Judge Michael Martinez ruled Friday that the officer should have been charged, but because the statute of limitations has expired, no special prosecutor can be called in.

Interestingly, the hearing occurred the day that the limitations statute expired, exactly three years after the September 11, 2012 incident in which deputy Brady Lovingier grabbed Anthony Waller and slammed him into a wall during court proceedings.

The footage shows Waller in handcuffs, leg irons, and a belly chain making a first appearance for an alleged assault on a female before Judge Doris Burd is seen advising him of his rights and legal procedures.

Waller stands quietly until Burd finishes her advisement, and then speaks saying, “Yes, ma’am, I’d like to object first. If I’m under investigation, I thought the investigation came first and then the arrest came.”

As Burd begins answering Waller’s objection by explaining that he could legally be held for three days without charges, deputy Lovingier can be seen suddenly taking hold of the man from behind – before Waller turns his head – and is yanked and slammed into a large glass window.

Waller can then be heard groaning before Lovingier and other officers are seen dragging him out of the courtroom.

Judge Burd filed an excessive force grievance against Lovingier but a formal response didn’t come from Denver police until over a year later, when the deputy was suspended for 30 days for the kind of assault that would have seen any mere mortal not adorn in a blue costume prosecuted to the full extent of the law.

“If he had killed me, would he have gotten 30 days?” Waller said. “I was defenseless. I was addressing the judge, exercising my constitutional rights, and this is what I get? A savage beating?”

Even after an internal affairs investigation ruled the attack was unprovoked, Denver District Attorney Mitch Morrissey refused to prosecute the officer who coincidentally is the son of former Denver sheriff’s department head Bill Lovingier.

In response, Waller brought a federal civil rights lawsuit against Lovingier, the department and the city while his lawyer Ken Padilla, petitioned Denver District Court to review the D.A.’s decision not to press assault charges prompting Chief Judge Martinez to scramble last week to schedule a review hearing for Friday – the day the statute of limitations for a felony assault charge expired.

“This [was] Mr. Waller’s last chance for justice,” Padilla said. “Deputy Lovingier, as a deputy sheriff, is not above the law. He is not privileged to use force just because he doesn’t like Mr. Waller.”

D.A. Morrissey was expected to appear in person to defend why he hadn’t pressed charges against Lovingier but Chief Deputy District Attorney Doug Jackson told Martinez the D.A. “didn’t know about” the hearing and was attending a wedding out of state.

Jackson explained that the decision not to prosecute the officer was based on Waller’s “long criminal history and habit of trying to intimidate sheriff’s deputies,” which according to Lovingier, included “growling” the day of the court appearance.

Jackson maintained that prosecutors believed Lovingier’s account that Waller had lost his balance, and that he helped “ease [him] to the ground,” before “a confluence of momentum occurred” causing the man to hit his head on the wall.

Jackson also said that three other deputies corroborated Lovingier’s story, and added that prosecutors never questioned Waller or Judge Burd regarding the incident because a forehead laceration Waller suffered from the assault didn’t qualify as an injury that warranted a felony assault charge.

Judge Martinez criticized the investigation but said he couldn’t find any legal fault with prosecutors.

“To my mind and from the evidence before me, there’s no reasonable excuse for the District Attorney not to [have prosecuted for] third-degree assault. That should have been done, and it wasn’t done,” Martinez said Friday. “Obviously, I’m agitated by the failure of the District Attorney to bring that charge, but now [that] the statute of limitations has run, there’s nothing I can do about it.”