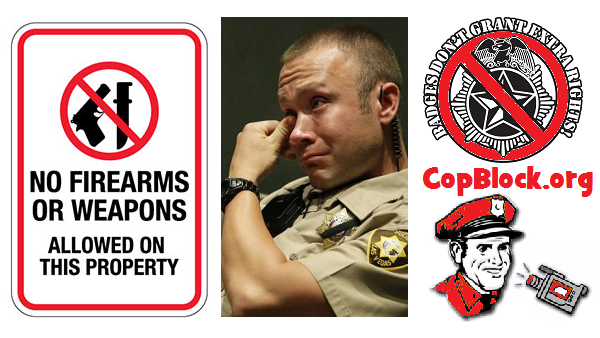 The Mounds Police Department in Oklahoma is the most recent group of cops to get their panties in such a twist over an incident in a restaurant, that the heightened pantie density achieved by the twist nearly caused their atomic structure to collapse and create the worlds first undergarment fission bomb. It took a team of experts in the restaurants emergency de-escalation unit to prevent the near catastrophic event.

Brian Radford, a reserve officer with the Mounds PD, was donning his full Hero Costume when he went to enjoy a meal at the Redrock Canyon Grill, which included his totally badass Official CopRocket Gun Accessory. PEW PEW PEW!!! However, the standard Mounds Hero Costume is pretty laid back. It is the Casual Friday version of Copstumes. Because of this, there seems to have been some confusion over the fact that the armed man was, totally like, a Real Cop and stuff.

Another patron at the restaurant reported a man with an unconcealed weapon near their table to the management. The restaurant has a no open carry policy, so they asked the man (whose identity as a cop, at the time, has produced contradictory reports) to conceal his weapon or leave. Radford complied by leaving, but then immediately took to social media to condemn the restaurant for not allowing him, a Very Important Policeman, to Flaunt It If You’ve Shot It. A tornado of hurt feelings then wooshed through the Oklahoma community, tearing down walls of trust and ripping off the roofs of over a dozen “Why, I NEVER!”s. The terror of this officers hardships then traveled the internets in search of those willing to sacrifice themselves to become divine instruments of self-righteous indignation, where it found many brave martyrs.

In response the corporate office tugged their tails as tightly as they possibly could, trembled in sheer respect and admiration of police, and apologized like it was going out of style. The issue, they say, was that the employee who had confronted the officer was still in training and did not realize there were special rules for police. Which, hey, I gotta admit, that is pretty dumb. That the police have their own special rules for everything is about the only thing we can say about them with any certainty over time.

Everybody hugged it out and now rainbows connect their hearts. The end.

Oh, hey, wait a minute. Did you notice that, too? The articles I have read all say that the officer was ‘uniformed’ but none of them say that he was actually on-duty. Was Radford donning his full Hero get-up while off-duty (if he was off-duty) for a specific reason, or was he just wearing it around so he could enjoy the Special Police Superpowers that it comes with? Most people who wear uniforms and special equipment to work are eager to be free of them whenever they are not necessary. I guess police is one profession where it pays to walk around all the time in your work clothes, like say when, for example, you wanted to be able to take your gun into places that do not allow them? That costume is a free pass for all of the rules and conventions the rest of us are beholden to, lest things escalate to the point where armed police attempt to detain us with the threat of death if we don’t comply with their demands.

It is a shame that another business has been made to suffer for the angry outbursts of entitled cops. It is even more a shame that police continue to work together to gang up on businesses who displease their delicate sensibilities. But hey, that is some collective bargaining they got going on, isn’t it? Too bad they hate liberals, socialists and commies so much, since they are the reigning masters of their collectivist methodologies.

Finally, here is a little piece of advice for Redrock Canyon Grill- let your customers carry weapons. You can pretty much bet that after this you will not be able to rely on the already sketchy protection services of police. It might come in handy if you have a few honest patrons packing should the need ever arise. Hell, you might become so popular that open-carry enthusiasts frequent your business regularly, guaranteeing the safety of you and your customers better than off-site emergency responders ever could. Then instead of having to bow down to bully cops you can tell those whiny, entitled problem customers in the Magic Uniforms to go eat at Jimmy Johns.