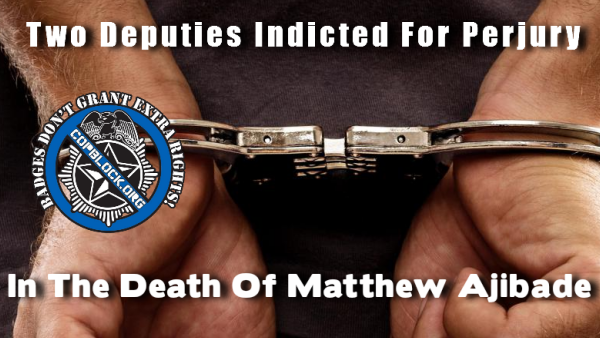 Two Chatham County Sheriff’s deputies were indicted on perjury charges for lying during a grand jury proceeding in January. The Grand Jury was convened to investigate the death of Matthew Ajibade, who was in custody, and restrained, at the time of his death.

Deputies Jason Paul Kenny and Maxine Evans were previously indicted on involuntary manslaughter charges in the death of Ajibade. The manslaughter indictment states that Deputy Kenny used excessive force when he tasered Ajibade while he was restrained in a chair, killing him.

The day after Ajibade’s death, Deputy Evans and Nurse Gregory Brown altered the jail logs, claiming that they had checked on Ajibade’s welfare.  Ajibade had been beaten, tasered, and left alone in an isolation cell, strapped to chair so that he couldn’t move.

In total, nine deputies were fired over the murder, but only two deputies and one nurse will face any charges.

The full indictment charged states that:

Jason Paul Kenny, 31, falsely stated before a grand jury on June 24 that “he had told Lt. Debra Johnson that he had Tased Matthew Ajibade four times before nurse (Gregory) Brown checked the restraints on” Ajibade, the Chatham County grand jury said in returning a one-count perjury indictment.

In a separate indictment, Maxine Evans, 56, was named in three perjury accounts, each stemming from alleged false statements she made before the grand jury on June 24. Those counts included:

• Stated “she entered a check performed by Officer Vinson at 12:20 a.m. on Jan. 2 into the restraint chair log when that check was reported.”

• “By stating she entered a check made by Officer Capers at 12:40 a.m. on Jan. 2 as the fourth check on the restraint check log.”

• “Stating that she recorded the checks in the restraint chair log as they happened.”

In each instance involving both defendants, the grand jury found the statements were untrue and were made “by a person to whom a lawful oath had been administered in a grand jury proceeding (hearing).”