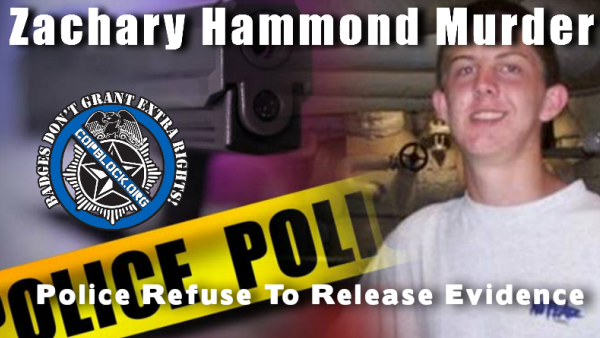 It has been almost two months since Seneca, SC police murdered Zachary Hammond, and despite the emotional pleas from Zachary’s parents, the police are still refusing to release any information relating to his death.

This horrific journey started on July 26, 2015, when Zachary was murdered by a Seneca police officer. Initially, Chief Covington refused to release the name of the officer, saying that “We feel that releasing his name may possibly subject the officer and family to harassment, intimidation or abuse”. It should have been evident then that Chief Covington was more concerned with his officer, than the parents of a murdered teenager.

Though they refused to release the name of the murdering officer, Chief Covington felt it was okay to spread lies and rumors about Zachary. Despite evidence to the contrary, Chief Covington repeatedly claimed that Zachary tried to ‘run over the officer’ and that the officer ‘was in fear for his life’.

Since the shooting, autopsy reports showed that Lt. Mark Tiller shot and killed Zachary from behind – meaning the murdering cop was in absolutely no danger when he fired on Zachary.

Today, Zachary’s parents, Paul and Angie Hammond, held a press conference that detailed the horrors of losing their son, and the ‘blue wall’ preventing them from learning what really happened.  Over the past few weeks, the Hammond’s have learned that dash cam video of the murder exists, but police refuse to release the video or even show the family. Also, Tenth Circuit Solicitor Chrissy Adams has had the completed investigative reports/findings from SLED for over two weeks, but has continued to lie to the family, claiming she can’t release any information until SLED’s investigation is completed (SLED – South Carolina Law Enforcement Division).

Once confronted about the lies, Solicitor Chrissy Adams now claims that she can’t release any information until the FBI finishes their investigation and the Supreme Court makes a ruling on a motion filed by the family. Did I mention that Solicitor Chrissy Adams, the one delegated with finding the ‘truth’, works with the Seneca Police Department? The family filed a motion with the Supreme Court to have her removed from the case, citing a ‘conflict of interest’.

This has to be one of the most blatant cover-ups, ever. At this point, the police are not even trying to hide that fact. However, considering they ‘are investigating themselves’, they will eventually find that ‘they did nothing wrong’.

2.2k
SHARES
FacebookTwitterGoogleRedditTumblr
DiggLinkedinStumbleuponMailPrint
You Can Support Cop Block by shoppping on Amazon using the banner below:
BANNERS ARE CLICKABLE