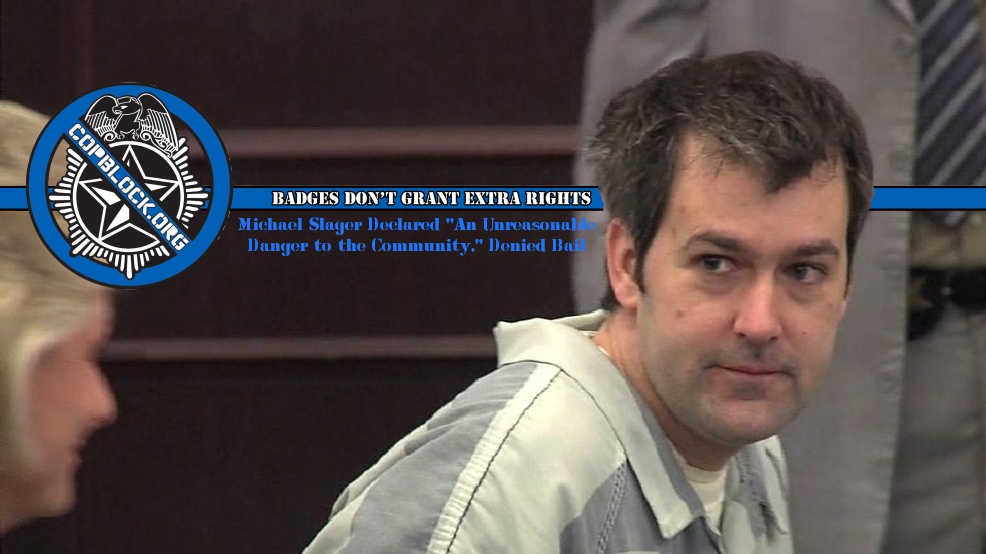 On Monday, a South Carolina judge denied bond for Michael Slager as he awaits trial on murder charges for shooting Walter Scott in the back as he ran away from him on April 4th (see video below). In the order (also included below), Circuit Judge Clifton Newman stated that releasing Slager, who has been held in solitary confinement since his arrest, “would constitute an unreasonable danger to the community.”

On Thursday and again Friday, Slager’s lawyers had argued that he had no prior history of violent crime “outside his work as a policeman” (which is an interesting semi-acknowledgement of the nature of police work) and therefore was not a threat to commit additional violence, if released. They also made the dubious claim that Scott may have been armed at some point before he was shot in the back while completely unarmed and running away from Slager. As is typically the case, they also brought up toxicology tests in an effort to point the blame at Slager’s victim for his actions.

The prosecutor, Scarlett Wilson, characterized Slager’s actions that day as that of a “firing squad” and an “executioner.” She also pointed out that he had been caught on video planting evidence when he ran back to retrieve his taser and then dropped it near Scott’s body in an effort to make it appear he was actually armed.

In addition, prosecutors submitted statements from police interviews by Slager and the man who recorded the video of the shooting, Feiden Santana. In his statement, Slager uses the go-to police shooting excuse of “I feared for my life” and then tells a clearly false and dishonest version of the shooting, in which he claimed Scott was standing in front of him pointing his own taser at him:

In an April 7, 2015 interview with an agent from the State Law Enforcement Division, Slager said he got into a struggle with Scott over his taser.

Slager said he and Scott struggled and Scott grabbed the barrel of his taser, jerked it out of his hand and pointed the barrel directly at him with his arms out.

Slager told the SLED agent he was winded, tired, breathing heavy and he was in fear of his life.

Slager said Scott had the taser in his right hand and was pointing it directly at him.

Slags told the SLED agent he stepped off to his left side, “shuffle-stepping,” as he was trained to do to get out of the way.

According to the document, Slager said that as we was going to the left he pulled his gun and fired multiple times.

Slager said that Scott was turning to his left as Slager fired.

Scott ran off, stumbled into the grass and fell to the ground.

Slager said that he was still standing with his gun pointed at Scott when Scott fell.

Regardless of whether their was a struggle over Slager’s taser (which is disputed by Santana in his statement) initially, the video of the shooting very clearly and undeniably shows that Scott was not holding a taser and was a long distance away from Slager not posing any threat whatsoever to him at the time he was shot.

Fortunately, the judge saw through all the subterfuge by the defense team and recognized that in light of the strength of the evidence, including a video literally showing him murder Scott, Slager should stay right where he is.