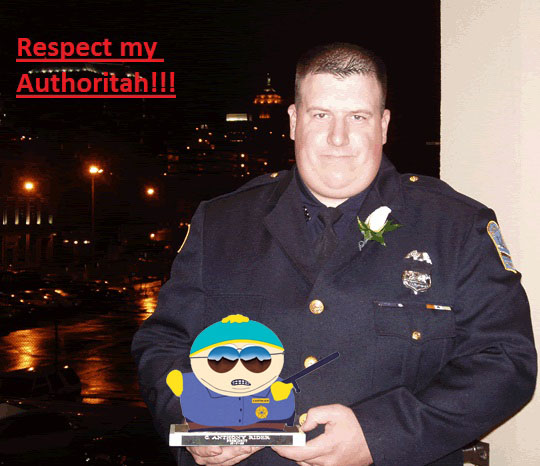 In today’s day and age it seems that cops just can’t be touched when it comes to accusations of police brutality. I mean some of us bang our heads against the wall begging those that watch the watchers to do something, anything when an officer is seen by witnesses or on video acting out of line. Our efforts seem to be in vain when most of the time we are faced with a department refusing to talk about an instance and shielding a perpetrator behind their “Thin Blue Line” of silence. These cases make me sick! It leaves the community fed up and angry and the victim without justice. The police like to call what’s happening around the country a “war on cops,” but quite frankly the war has been waged long ago and it is not against cops, it is against US. We have struggled at every turn for what should be our right. We grow up saying the Pledge of Allegiance, quoting the words “with liberty and justice for all.” That seems to be a joke these days. Sadly, many of us are left with a very scary and straightforward question. What does it take to get justice for a brutal cop?

Well, in this instance at least we have an answer. Officer Corey R. Krug of the Buffalo Police Department has been suspended without pay for a number of accusations against him over a period of many years. Mr. Krug is also facing criminal charges for these events.

Here is what we know. In a number of instances leading all the way back to 2011, this “peace” officer has used an insane amount of force, causing a trail of victims in his wake. He has never been suspended, though. He has fought every charge from the beginning and has remained in his superhero costume throughout all of it. He was never even placed on desk duty. So what was the moment he screwed up so big SOMETHING had to happen? What in the world could break that thin blue line of non-accountability?

Being broadcast to the world on live TV beating a defenseless man! Yup, that must have been it! ABC news was on the scene early Thanksgiving morning in 2014 for their normal shots of traffic and the scenery of Buffalo, NY. That’s when Officer Krug, not realizing they were there, decided to use his stick of justice to peacefully end an argument occurring there. The stick must have missed a recharge or something, because after a hit or two to the head area the guy was still not respecting his Authoritah. That’s when Officer Superman decided to just whale on the guy for a while with his rod of peace, truth and justice. Sadly for Officer Superman, his greatest nemesis was present on scene… the video camera. That explains why his powers were fading so fast! His buddy quickly ran up and told him he was on film, which made him cower under his cape and run away!

The victim of this beating was never even charged with a crime. Usually some sort of BS charge would be given to save face, like disorderly conduct or the ever-popular resisting arrest. In this case the officers on scene knew they had been caught red-handed and decided that the faster way to brush this under the rug was to simply tell the man who just was beaten with a billy club to “get out of here now.”  Thankfully, ABC producers were so appalled by the accidental video that they quickly aired it across the country and contacted lawyers. As a result, the department did the only thing it could in the face of the nation:  charged the officer and suspended him without pay.

Surely this is an isolated incident and the department administrators who publicly disavowed his actions will stand by their words, right? Nope. In following weeks the department helped fund this psycho cop’s legal bills and even showed up in droves to support him in court. What was that again about “good cops,” all you police lovers? Tell me again about the few bad apples and the war on cops. They have the nerve to be blaming the cameras for taking their actions out of context. It’s so funny it’s scary. How dumb can people be to still be shining these animals’ boots with their tongues? The biggest criminal is not the perpetrator but the people who saw the crime and did nothing or even helped the criminal!

So what does it take to hold an officer accountable today? Nothing.  It’s not possible in our current system. Two lawsuits and a number of complaints did nothing to stop this cop from beating on another person for zero reason. The mainstream media managed to get him suspended but that will be short-lived, as every officer in the department is taking his side despite their department’s public outrage. As soon as the media forgets this story the department will quietly drop those charges and bring him back into the department. It’s the same story all around the country. The thin blue line will not be broken.