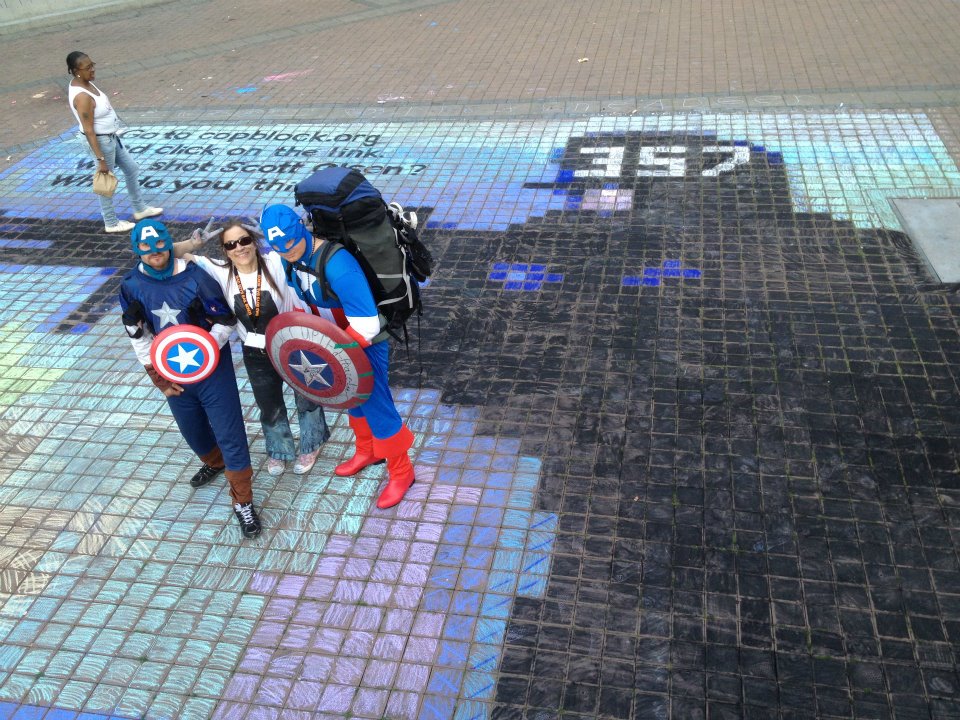 UPDATE: Naomi shared this information on the body of an email with the subject line, “Oakland, a Tale of Two Cities.” She said it could be added here. My intention is to help keep those interested updated about what’s going on with this positive community in Oakland.

One
They had this guy, saw the hurt people let him go on November 2nd, because “he wasn’t drunk” and still haven’t finished “investigation” or even claim to know who he is.

http://www.sfgate.com/cgi-bin/object/article?f=/c/a/2012/03/17/BA1G1NMG0C.DTL&object=%2Fc%2Fpictures%2F2011%2F11%2F11%2Fba-occupy12_car__0504536591.jpg
Two
The Oak3 or Icecream3, are accused of hate crimes and robbery.
http://nation.foxnews.com/occupy-movement/2012/03/04/three-occupiers-charged-after-battering-woman
The city’s case is one woman who admits she’d been drinking and admits she didn’t SEE anyone with her wallet. Even went back to the store the next day to see if she had left it there. In first police report named the wrong guy,  another OO guy who looks like him and was out of town. Then went back to the Police station the next day to change her story and sign another statement that changed the name.
I’ve been sitting in at the preliminary hearing. It’s been fascinating. Dan Siegel (mayor Quan’s former legal advisor who quit because of the way she handled Occupy) is council to Nneka Crawford and he was almost arrested in the courtroom on Friday for saying something while the 8 or more  were throwing an occupier out of the room. Saved only by the judge. The bailiffs were just DYING to arrest. They seem pretty freaked out by the level of support for the 3. Can have about 20 or 30 occupiers in court at any given hearing. http://en.wikipedia.org/wiki/Dan_Siegel_(attorney)

———————————————————————————
Not long after sending a package with a CopBlock.org t-shirt and some literature to Naomi Pitcairn in Oakland, I received back an email informing me that the items were received. Attached to the email was a picture that showed some awesome art, dubbed Chalkupy. Read the background and check out the pics and video below.

I followed-up with Naomi who was kind enough to make time to do the write-up below. After which she emailed back and added:

I used to be a billboard painter ~1983 – 1985. We always used a grid to map out our picture to the space. It’s been fun to bring this old skill that I learned from the “old school” guys in NY as an apprentice back into use so many years later.

Ah, now it makes sense. Notice the captions on a couple of the pictures below to see how is it’d be to could replicate in your area.

Despite the aggressive actions of some employed at Oakland police department, Dandelion and those active with Chalkupy at Occupy Oakland are an inspiring example of creativity, art, and love. Thanks much! On the Origins of Chalkupy

Dandelion, fairy witch of Occupy Oakland (OO), is threatened with arrest for coloring while sitting on a public sidewalk.

It was another sunny day in downtown Oakland. Occupy friends were hanging out at the Plaza. It’s a little dirty since the city wants it that way, because it makes Occupy look dirty. The grass was a city-created mud-sea, so the only place to sit was on the perimeter on benches or on the pavers which is were Dandelion, a self-described “Fairy Witch” was sitting, drawing one of her magic symbols that she would bless and give to people.

Specifically, Dandelion was sitting on the pavers in the square on the C of the word OCCUPY which had been chalked onto the pavers by some unknown person (in, what many thought, was a very attractive way). At about 2pm on a Friday afternoon, the city showed up and by the city I mean a couple of officials, 2 guys with power washers and 6-8 cops there to clean the word OCCUPY and nothing else off of the pavers. The police cited hygiene as the reason, although a place 30 feet away where people urinate was “not scheduled for cleaning” that day. Although the power-washers were just sitting there, there was no way that they were going to clean the pee.

Dandelion was not inclined to move. She had her blanket down her crayons laid out and seemed quite comfortable where she was. As the growing numbers of officials collected in the background, the other letters (OCUPY) quickly filled-up with wheelchairs, jugglers, knitters, singers, chanters and other colorers. None seeming particularly inclined to move. Marsha was knitting her a scarf for her husband, Rasta, who was in jail for attempting to unload a portable toilet. Kids were running around playing. Bella and Matt were livestreaming, DJ Occupy, Enrique and Momo were free-styling, Pratibha was calmly questioning the police, Raven was quoting the classics while Dandelion described the current state of affairs as “The Grapes of Wrath 2.0.” The crime we were committing was “obstruction of public access.” Of course you could walk around us, you just couldn’t power-wash us because even the police admitted that that would be assault. A discussion ensued on how you call the police on the police but nobody was sure. It wasn’t long before one of the power-washers left in disgust. The other guy seemed more inclined to earn his money as he sprayed around our feet but not on them although they did get a little wet. Finally, the police decided to arrest us if we didn’t move so we moved and the O, one C and the Y quickly disappeared. Dandelion was left sitting on the word CUP. In spite of her loss, still she refused to move. When asked if she understood the situation she remarked that although she had studied Political Science, Literature and Sociology that NO she did not. She took down the Lawyer’s Guild number which everybody at OO has pretty much memorized by now and called her babysitter to let her know that she was being arrested for coloring, remarking that she was fortunate to be able to get arrested today since she had a babysitter. There she sat, in prayer, her red fuzzie coat around her shoulders, the sweetest, most innocent little criminal you could imagine. You could tell the police were starting to lose a little confidence. Meanwhile Pratibha and I had been making friends with the remaining sprayer who accepted our offering of a flower. It just so turned out that he was an artist himself so maybe he could relate after all. Once we had all made friends, he decided to give up too, and Dandelion, the word CUP were left unmolested to fight another day.

Since chalking is washable, it is not illegal and so from that day forth, we have continued to chalkupy on Friday afternoons. Every week the city washes our slate clean for us. Every week we are back with a new, provocative design. The next Friday it was an Anonymous mask followed by an OPD Brutality Badge, a Tipi, Oscar Grant and our last nod to Copblock.org‘s fantastic video about the shooting of former Marine Scott Olsen. [which included the text: “Go to CopBlock.org and click on the link: Who shot Scott Olsen? Who do you think?”]

Thanks to all those who contributed to this beautiful, spontaneous action: @BellaEiko, DJ Occupy, @MomtheRebel (Momo), @NinaNerdFace, Raven, Enrique, Matt, Pratibha, Naomi, Marsha, Dandelion, and others. Now we celebrate the anniversary of the original chalkupation every Friday afternoon at Oscar Grant Plaza, Oakland. Family friendly activity for the kids – they love it. We bring the chalk and music! Sometimes Captain America shows up. Sometimes two of him show up.

Unfortunately things are not all love and light at OO. Today we stand in solidarity with two of our friends who are now in jail awaiting much more serious false charges. Momo and Teardrop, are now both at Santa Rita – a horrible facility built to warehouse 4000 people while they await vindication, along with other members of OO who are still waiting for justice. Three OO members, including Teardrop are accused of an anti-gay hate crime and robbery. A turnout of about 50 self-professed “women, fags, dykes, queers and trans* people showed up at the courthouse today in solidarity for the three today claiming to have worked, cooked, slept and marched with these people and promising to be at court and ready with warm food when they are released. The lesbian speech ended with this: “Until they tear off their badges and join our fight against the state and capital, willing to fight the officers who stay on the side of the state with as much force as they have fought us in the streets from Oakland to Cairo, the police are our enemies. And any time they purport to be on our side, or act for us, we have three little letters for them: FTP!”
CHALKUPY FRIDAYS! 2PM AT OGP