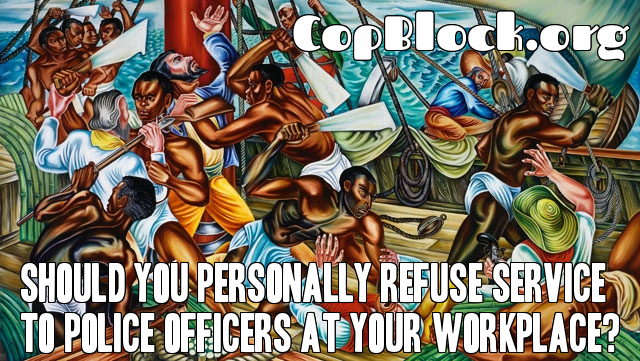 Recently there has been a rash of people who are fed up with the police state whom have begun using the only position of power they have, in their own workplace, to send a message to cops. While media and political pundits tout the myth of a War on Cops, there is a real battle taking place that is not violent, but the result of a new ideological momentum that thwarts the shackles of authoritarianism. The serfs, as it were, are rising up and refusing to participate. The refusal of service to LEO’s might be one of the most powerful trends yet to surface in the fight against the police state.

So should you personally put your job on the line to make a similar statement? That is not for me to say. We all have very real survival needs that are facilitated by employment, and risking our jobs risks our very survival. Yet there are worse things than dying, and living in a cage is one of them. The police state has us all imprisoned in its monopoly on ‘justice’. So every individual has to weigh their own needs in the way they feel best suits them. But for those in a dead end job that want to make a difference and could care less if they are forced to look into a new job soon, refusing service to cops might be the most meaningful statement you can possibly make.

One of the great lessons I learned as a child was the meaning of giving. It was not what you gave, nor how much, but rather the percentage that you could actually afford, that matters the most. For instance, a rich man giving a charity a hundred dollars was not as great a sacrifice as the poor man who gave only one of his only three dollars. The service industry is filled with the working poor. Yet they are still forced to ‘donate’ to the system that pays police. So while their contributions are a greater sacrifice, the service they receive in return is often of much lower quality. In fact since those in the lower socioeconomic sectors, the service industry employees, are also the most statistically likely to be harassed, arrested, imprisoned, brutalized and otherwise lubelessly penetrated by the angry fist of ‘justice’, they are forced to sacrifice more to a system that treats them the worse.

So it is of little surprise that those who have been forced into soulless service industry jobs by oligarchal economic paradigms for very little reward are starting to fight back. Police represent not just a poor return on their forced investment, but are also the whip-bearers working on behalf of the economic powers that have created this endless cycle of consumption for profit. When the working poor pour out into the streets to fight the forces of their oppression, who will be there with rubber bullets, tear gas and paddy wagons…or worse? The police are not just more harsh on you the poorer that you are They are the thin blue line that protects the ruling class by keeping you in your place. Police are the Uncle Toms on the plantation of the modern working poor. They are the sellouts who serve to create a barrier between the few who have us all enslaved on some level.

So should you risk your job by refusing to directly serve them? Well first of all, what kind of sicko would even ask that? How can anyone possibly be in a position that terrorizes an entire industry sector at their expense and then also expect to be served with a smile by them? What kind of psychotic, sociopathic bullies could possibly believe they were entitled to use the efforts of your labor to fund theirs, when theirs is to harass you, and then still have expectations that you owed them more of your labor or a pleasant experience?

The next question is, will it help? Now imagine that every person working at the counter of some restaurant refused to serve the police, because of how police treat their kind? Could restaurants afford to fire every person who didn’t like the hand this system has dealt them, and cops role in it? I imagine that, if we were all honest and brave, they could not. They would be forced to either stop serving cops or to replace their employees. While robo-server is becoming an actual thing, the people who held those jobs are just going to end up in new service industries or jobless. In the case of the former, the problem will just transfer, and in the case of the latter, the problems will be much worse on all of society and those who enforce the laws it is encumbered with. And even more immediately, it sends a message. And people are starting to listen.

So I say, if you strongly feel like standing up against the police state and are not afraid to face the consequences, go for it. With turnover rates in the service industry being so high, you probably weren’t going to keep that job long anyway. And since employers can only give general information to future employers, and since referrals often don’t matter in service jobs, it is unlikely the consequences will follow you. The best thing about having nothing is that you have nothing to lose. And when you have nothing to lose, that which you still give, means even that much more.