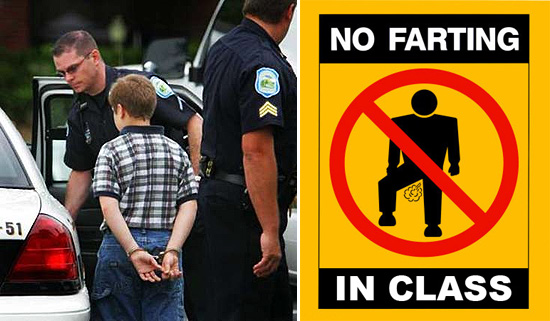 We’ve all seen the image of Ahmed Mohammed in handcuffs. The 14-year-old boy was arrested after showing a teacher a digital clock that he made. The aspiring engineering student was rightfully proud of his accomplishment (I still have problems resetting all the clocks after the power goes out). However, teachers in Texas automatically assumed that a Muslim boy with an ‘electronic looking things with wires’ was there to blow up the place and they called police and had him arrested. Luckily, no charges will be filed against Ahmed, but taxpayers will be on the hook for a looming multi-million dollar lawsuit for discrimination, unlawful arrest, and violating Ahmed’s civil rights.

Of course, these types of arrests are nothing new, but given the recent issues with police, it’s something that will only get worse. Therefore, keeping with the theme of idiotic arrests made by even more idiotic police officers, let’s take a look at some of the more outlandish reasons kids have been arrested or threatened with arrest.

#1 At one public school down in Texas, a 12-year-old girl named Sarah Bustamantes was arrested for spraying herself with perfume.

#2 A 13-year-old student at a school in Albuquerque, New Mexico was arrested by police for burping in class.

#3 Another student down in Albuquerque was forced to strip down to his underwear while five adults watched because he had $200 in his pocket.  The student was never formally charged with doing anything wrong.

#4 A security guard at one school in California broke the arm of a 16-year-old girl because she left some crumbs on the floor after cleaning up some cake that she had spilled.

#5 One teenage couple down in Houston poured milk on each other during a squabble while they were breaking up.  Instead of being sent to see the principal, they were arrested and sent to court.

#6 A 12-year-old girl at a school in Forest Hills, New York was arrested by police and marched out of her school in handcuffs just because she doodled on her desk. “I love my friends Abby and Faith” was what she reportedly scribbled on her desk.

#7 A 6-year-old girl down in Florida was handcuffed and sent to a mental facility after throwing temper tantrums at her elementary school.

#8 One student down in Texas was reportedly arrested by police for throwing paper airplanes in class.

#9 A 17-year-old honor student in North Carolina named Ashley Smithwick accidentally took her father’s lunch with her to school.  It contained a small paring knife which he would use to slice up apples.  So what happened to this standout student when the school discovered this?  The school suspended her for the rest of the year and the police charged her with a misdemeanor.

#10 In Allentown, Pennsylvania a 14-year-old girl was tasered in the groin area by a school security officer even though she had put up her hands in the air to surrender.

#11 Down in Florida, an 11-year-old student was arrested, thrown in jail and charged with a third-degree felony for bringing a plastic butter knife to school.

#12 An 8-year-old boy in Massachusetts was sent home from school and was forced to undergo a psychological evaluation because he drew a picture of Jesus on the cross.

#13 A police officer in San Mateo, California blasted a 7-year-old special education student in the face with pepper spray because he would not quit climbing on the furniture.

#14 A 5-year-old boy was arrested, handcuffed, and had zip ties placed on his hands and feet. He was also forced to go to a psychiatric hospital. The boy suffers from ADHD and had pushed a cops hand away from him. He was charged with assaulting a police officer.

#15 At one school in Connecticut, a 17-year-old boy was thrown to the floor and tasered five times because he was yelling at a cafeteria worker.

#16 A teenager in suburban Dallas was forced to take on a part-time job after being ticketed for using foul language in one high school classroom.  The original ticket was for $340, but additional fees have raised the total bill to $637.

#17 Police were called out when a little girl kissed a little boy during a physical education class at an elementary school down in Florida.

#18 A 6-year-old boy was charged with sexual battery for some “inappropriate touching” during a game of tag at one elementary school in the San Francisco area.

#19 In Massachusetts, police were sent out to collect an overdue library book from a 5-year-old girl.

#20 A 13-year-old boy was arrested for kissing his classmate on a dare. Now, he faces second-degree assault charges.

And, to finish things up, my personal favorite:

A 13-year-old student was arrested for FARTING in class.  Yes, I said farting. Back in 2008, the 13-year-old boy had a bad case of gas. The school resource officer was called in to interrogate the young man, who subsequently copped to being the phantom farter, and was arrested for disrupting class. (It’s okay to laugh, seriously).

If the young man is anything like my 13-year-old son, one could possibly equate the foul-smelling odor to something similar to a third world country’s bio-weapon, but it shouldn’t rise to the level of an arrestable offense.

(This story was originally posted at CopsCaughtOnTape.com)