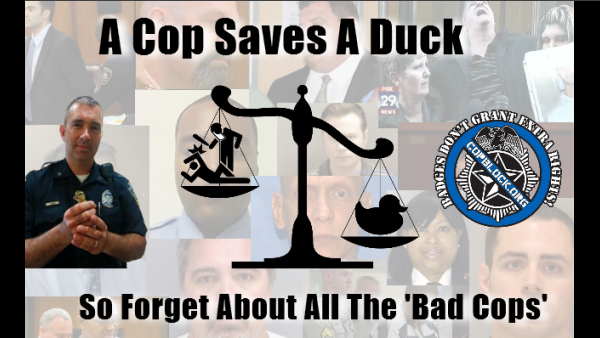 Over the last several days, I have seen numerous videos that showcase the ‘positive and good things that police officers do’. I watched a cop ‘save’ a skunk, one helped a stranded hedgehog, and another who saved a baby duck.

It’s no secret that animal videos are some of the most watched videos on the internet. And this is exactly what the ‘Thin Blue Line’ PR machine is preying on – your emotions.  Police hope you forget about the ‘few bad cops’ and focus on the positive things in life, like helping an old man fix his tie.

In the video below, an officer is seen helping an old man fix his tie. It’s been shared on thousands of police pages across Facebook.  Within 17 hours, it’s been viewed almost 6 million times. According to the original poster of the video:

So I’m working at a synagogue today…this older gentleman came up to this police officer and said I can’t tie my tie any more can you help? This is the video I caught…I’d love to see this go viral especially with all the negative stuff in the media about police. No one sees the positive things anymore…

Really? Let’s take a look at all this pesky ‘negative stuff‘ that the media reports on. Below is a list from the Cato Institute, which tracks crimes that police commit. In only five days, police have been arrested/convicted for beating civilians, excessive force, illegal strip searches, taking bribes, stalking, illegal firearms, DUI‘s, sexual misconduct, felony child abuse, smuggling drugs, domestic violence, murder, rape, sexual assault/abuse of a child, and dozens more crimes.

So forgive me for not falling for the PR spin that’s currently going on. I don’t see how an officer helping an old man with his tie, somehow negates even ONE item on this list.

Here are the eight reports of police misconduct tracked for Wednesday September 16, 2015:

Here are the 11 reports of police misconduct tracked for Tuesday, September 15, 2015: Here are the 13 reports of police misconduct tracked for Friday, September 11, 2015: