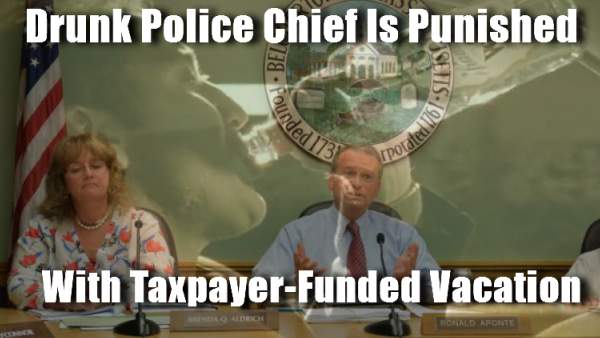 The Belchertown Select Board has voted to suspend Chief Francis Fox after allegations that he was driving drunk were made public. (Click here for the full story).

During the September 14th meeting, the board unanimously approved Chairman Ronald Aponte’s decision to put Police Chief Fox on paid leave for what should have been a DUI on Super Bowl Sunday. The board also appointed Sgt. Bruce Jenks acting chief while former Chief Francis Fox is on administrative leave.

I can only guess that Chairman Aponte has not read the police report or the email that Chief Francis Fox sent, admitting his guilt.

Board member Nicholas O’Connor seems to be a bit more optimistic, saying that he will wait and see if Chief Fox ‘lives up to standards of  responsibility, accountability, and integrity that the position requires”.

So in the end, the Chief will most likely keep his job. I’m sure he will have time to think about his choices as he enjoy’s his taxpayer-funded vacation. 2.5k
SHARES
FacebookTwitterGoogleRedditTumblr
DiggLinkedinStumbleuponMailPrint
You Can Support Cop Block by shoppping on Amazon using the banner below:
BANNERS ARE CLICKABLE