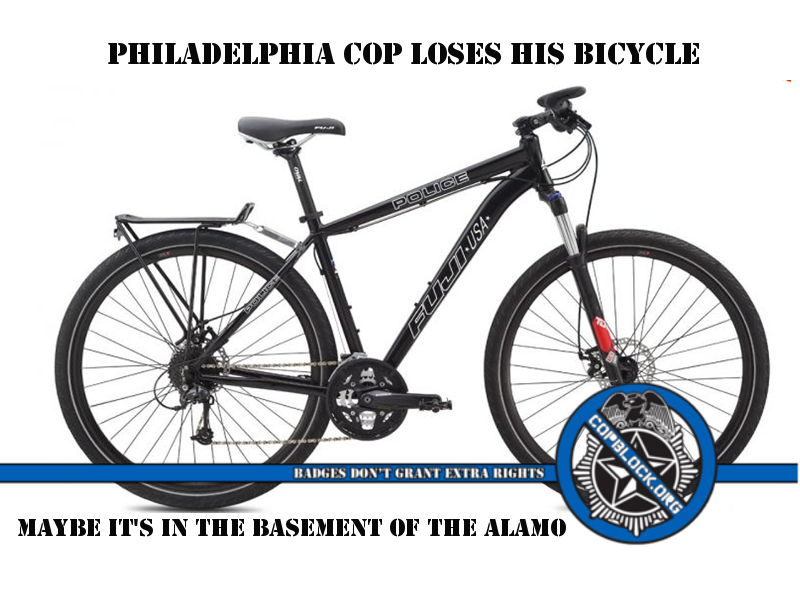 On Thursday morning of September 17, 2015, a Philadelphia police officer parked his police bicycle to go into a convenience store.  At around 9 am the officer entered the 7 Eleven located at 23 West Girard Avenue in North Liberties. While inside, a man and women approached the bicycle that was clearly marked as a police bicycle and rode off with it.

The bike that was swiped is a 17 inch Fuji mountain bike.  It has a back saddlebag with Police marked on it.  They are asking that anyone who has information about the bike to call 215-686-TIPS.  I’m sure people will get right on that.

It seems to me that karma has played a part in this as these officers patrol the streets day and night stealing from citizens in the form of citations for victimless crimes.  As a follower of the Non Aggression Principal, I would never steal something from anyone whether they were a cop or not.  I’m also not going to lie and tell my readers that I did not find some joy in hearing about this.

With the way that police seem to be hell-bent on solving any crimes committed against them, I’m quite surprised that they didn’t lock down the neighborhood and do a door to door sweep while kicking in doors and threatening citizens at gun point.  This seems to be the MO of cops these days.  Any other lowly citizen would have reported the theft of their bike and they would have taken a report over the telephone and nothing more would be done to solve the crime.

A fortune-teller told me that it’s in the basement of the Alamo.  Maybe someone should call the TIPS line and tell them that’s where it’s at.  Tell them Large Marge sent ya.