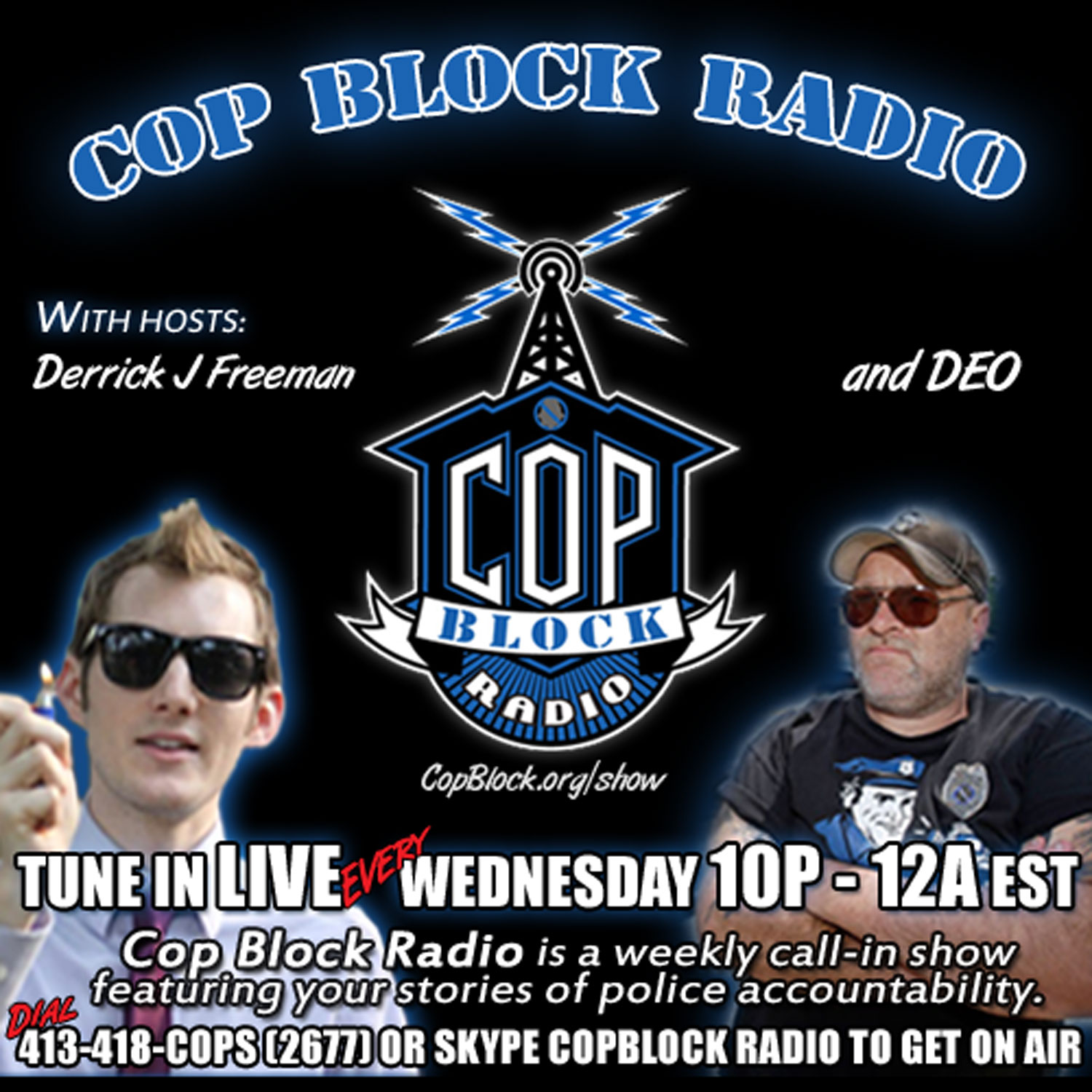 Last night on CopBlock Radio, Ademo Freeman and Brian Sumner joined us to share their newest adventure: traveling across the country in MAC (Mobile Accountability for Cops). They will be meeting up with CopBlock chapters in over a dozen states in the next seven months. Follow their adventures at http://CopBlock.org/MAC

Derrick J, DEO, and Severin covered the week’s most important stories of police abuse and accountability featured on CopBlock.org. We started out with a video of two San Francisco cops chatting freely in a Happy Donut shop about how they plan to alter the video captured by their body-cams. Then they laugh about how their victim’s head explodes from their bullets. Ha-ha, right? Good thing one quick-thinking man surreptitiously recorded their disgusting conversation for all to hear.

Speaking of recording cops, this week we celebrated the 3rd anniversary of my movie, Derrick J’s Victimless Crime Spree. If you haven’t seen it yet, what are you waiting for? It’s free on YouTube, and it features dozens of hilarious arrests and courageous activism that takes place in “the Shire.” Watch and be inspired, and if you like the movie, support it by buying the DVD on Amazon or by scheduling a screening with your friends and family. It’s a great place for anyone to learn about peaceful noncompliance and the problem of the growing police state, no matter where they are (a)politically.

Pete Eyre, one of the original co-founders of CopBlock.org posted this week about how he held one of the cops in the movie accountable for his actions. By video recording during the incident, remaining calm, publishing media, conducting interviews with witnesses, and then singing peaceful songs outside the cop’s residence and notifying neighbors of his misconduct, Pete sets a great example for others to follow. His actions are peaceful and effective. Learn more about what strategies worked by reading his full blog post and watching the video he produced.

Tools like Cell 411 and Peacekeeper didn’t exist yet back then, but now that they do, I recommend you take the time to download and set up these invaluable apps. They allow you to network with others to alert your friends and neighbors in case of emergency (arrest, fire, etc.) and organize a response.

Finally, we covered the notable stories of Natasha McKenna (a mentally ill woman who was murdered by jail guards that were excused of any wrongdoing), video of an Allentown man who was randomly attacked by law enforcers while waiting for the bus, and the hilarious “Stop a Douchebag” YouTube activists in Russia who confronted their local law enforcers about double standards—and ended up receiving tickets for jaywalking.

Catch CopBlock Radio every Wednesday night from 7-9p Pacific time/10p-12 Eastern time at http://CopBlock.org/Show. Support us by sharing this episode on social media and by purchasing gear at the CopBlock Store!