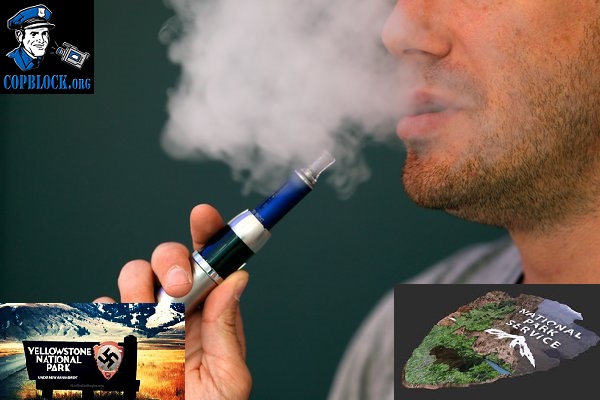 You read that headline right. On Monday, the National Park Service announced that electronic cigarettes are now banned in any national park area where traditional smoking is prohibited. That means they have put the power of the police state behind it. That means that tazing you, shooting you, kidnapping and caging you, are all possible results for smoking your  E-cig in the park.

The NPS said the measure was taken as a “step to safeguard people’s health. Sounds more like a threat to people’s health to me. If the E-cigs don’t get you, the police state will! There is not enough research at this time to determine if the nicotine vapor is harmful to you. The Park Service works for the same government that’s been suppressing  marijuana for the past 60 some odd years. If your health was truly the concern, they would have legalized weed years ago!

But, advocates for e-cigarettes are unhappy with the announcement, and I have to agree. Gregory Conley, president of the American Vaping Association trade group, says the restrictions are a “bad idea”

“Outdoor smoking bans in parks can at least somewhat be justified by the risk of fires, but vapor products pose no more of a fire risk than a cellphone battery,” Conley said. “This behavior is shameful and any enforcement of the ban will constitute a great misuse of government resources.

My motivation and/or reasons for agreeing may differ from Mr. Conley’s, but I agree with the fact that these restrictions are a huge waste of government resources. Not to mention putting Park Rangers in harms way. By increasing the number of reasons these gloried security guards have for interacting with peaceful people who are just trying to enjoy nature, you are forcing heated arguments over the stupidity of the rule. The hostility they will face for trying to enforce such a stupid law, is not worth it.

If you think police should stay at the station until called, a park ranger shouldn’t even be talking to park goers unless the park goers ask them a question! There is no reason when I go out into nature like that, that I should be forced into an interaction with a state code enforcer. Unless of course I’m trying to start a forest fire, or poison a river! Wait, all I have to do is say I work for the EPA and poisoning a river is ok too!

This is just another reason to expand the police state, which is all I see in any new laws to be at this point anyway. When I say I am law abiding, I mean I don’t lie, steal, cheat or kill. No victim, no crime.