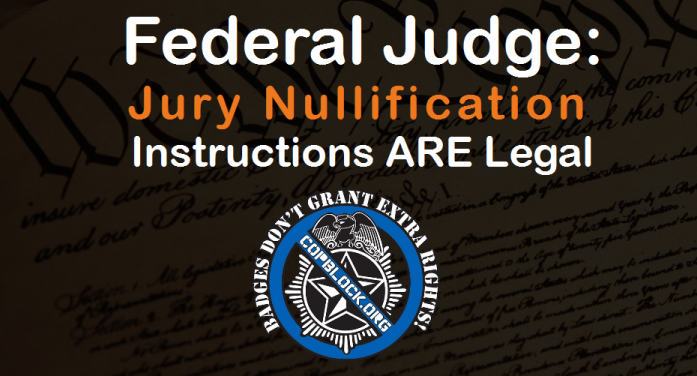 A Federal judge has issued an injunction which protects activist’s rights when handing out Jury Nullification pamphlets. This comes after the arrest of Eric Brandt and Mark Iannicelli, two jury nullification activists, who were both charged with seven felony counts of jury tampering.

Brandt’s and Iannicelli’s attorney, David Lane, filed a federal lawsuit on their behalf, as well as two other activists and the FIJA (Fully Informed Jury Association). The lawsuit sought to prevent activists from being harassed and/or arrested by Denver police officers, and prevents the enforcement of a judicial order that prohibited demonstrations near the courthouse. (This was very similar to the order that Chief Judge Mark Mahon issued against Photography Is Not A Crime correspondents)

Despite the Federal judge’s injunction, Denver District Attorney Mitch Morrissey still plans to prosecute Brandt and Iannicelli on jury tampering charges. The DA’s public information officer stated that the duo was arrested under Colorado’s jury tampering statute, as they were ‘seeking to communicate with a juror outside of a judicial proceeding in an attempt to influence the juror’s vote, opinion, decision, or other action in a case.”

Attorney Lane says the charges will most likely be dropped against his clients.

However, just two days after the Federal judge’s injunction, police began harassing activists and confiscating all literature relating to jury nullification. According to Attorney Lane, “a cadre of Denver police officers” descended upon them and several associates as they were engaged in exactly the sort of ‘pamphleting’ described in the injunction.

He says the cops seized “all literature regarding jury nullification including about 1,000 pamphlets, a small shade shelter, a table, four chairs, buckets, a cooler, signs and other items.” Lane adds that the officers even “attempted to take personal property such as purses, computers, backpacks and other items” from the activists, but “the pamphleteers resisted the attempts by the police to steal their personal property.”

Denver police justified the theft of personal property, claiming the activists were blocking foot-traffic near the courthouse. However, in a photo provided by FIJA, you can see that police lied to justify defying the Federal judge’s order. Lane, in his motion to have the Denver Police Chief cited for Contempt of Court, stated,

The Denver police, acting as jack-booted thugs in blatant violation of this Court’s Order, came into the plaza and began seizing all property not being carried by a pamphleteer. The only plausible explanation for this is that the police were acting in retaliation for the exercise of the free speech rights of the pamphleteers.

Jury Nullification is a long standing tradition of finding a defendant not guilty of a crime, despite evidence showing guilt. The jury in effect nullifies a law that it believes is either immoral or wrongly applied to the defendant whose fate they are charged with deciding. The legality of Jury Nullification has been a widely debated topic in the courts, but it does have a legal foundation in our history.

In the 1794 case of Georgia v. Brailsford, our first Chief Justice of the Supreme Court said that,

In 2012, New Hampshire passed and signed into law HB 146, a fully informed jury bill, which guaranteed that the defense be allowed in court “to inform the jury of its right to judge the facts and the application of the law in relation to the facts in controversy.” The New Hampshire legislature made clear in the text of the bill its intent “to perpetuate and reiterate the rights of the jury, as ordained under common law and recognized in the American jurisprudence.” The measure took effect on 1 January 2013 in New Hampshire’s Revised Statutes as RSA 519:23-a.

Unfortunately, that law was struck down the the New Hampshire Supreme Court because of the law’s ‘wording’. However, the effects of the law have been felt across the Country. Just this year, a medical marijuana patient in Nevada was cleared of wrongdoing by Jury Nullification. Despite evidence that the man violated state laws, the jury was able to use commonsense when returning a verdict of ‘not guilty’. It was a case where the jury ‘judged the law’ and not necessarily the actions of the defendant.

DA Morrissey, who is refusing to drop the charges against the Jury Nullification activists, is the same DA that refused to bring charges against two police officers that murdered 17-year-old  Jessie Hernandez. Police are said to have been called about a “suspicious” vehicle — one driven by Hernandez and containing several other young people. As the cops moved in, one of the officers was reportedly struck in the leg by the car — after which the bullets flew.

According to a young passenger in the car,

It’s very disturbing that the DA Morrissey has a history of prosecuting the ‘little guy’ while allowing police officers to openly violate the law and the rights of citizens. To date, 25 Denver police officers have been charged with crimes – and those are just the ones that couldn’t be ‘swept under the rug’ by a corrupt police chief and equally corrupt district attorney. Of those charged, at least three had their cases sealed from public view, and several others were either acquitted or received nothing more than a ‘slap on the wrist’. Here is the list of those officers: